Christmas 2014 marks 100 years since the historic Christmas truce united, if just for a few days, warring German and British troops on the WWI battlefield.

After months of fighting, the battle-weary soldiers agreed to lay down their weapons and cross "no man's land" to exchange gifts, goods and soccer games with their enemies. One soldier described the scene in a letter back home, which was later published in the Hampshire Chronicle:

I had a most extraordinary Christmas, and I have come to the conclusion that I would not have spent it out of the trenches for worlds. We went in on Christmas Eve, under the usual conditions of this sniping warfare, and carried on as usual during the night. As soon as it got light, however, the sniping died down on both sides, and by sunrise had ceased altogether. The complete silence was most weird, and I could not help thinking that this sort of mutual agreement would turn into an open truce. So it did. Encouraged by the absence of lead in the air, heads soon began popping up on both sides...

The truce lasted through Christmas and in some places carried through to the New Year. A row of small Christmas trees strung with lights lined the trenches, and the soldiers carried out the ceasefire Pope Benedict XV had asked world leaders to observe just weeks prior.

To honor the 100th anniversary of the Christmas truce, a group of students from Brigham Young University produced the above video with original photographs from 1914, accompanied by the BYU Men's Chorus rendition of "Silent Night." The video was released through Faith Counts, an interfaith organization with joint sponsorship from the U.S. Conference of Catholic Bishops, Hillel International, the Sikh American Legal Defense and Education Fund and other religious bodies.

The war would continue for another four years after the truce, claiming millions of lives and leaving millions more injured or missing. In our own era of war and unrest, however, the Christmas truce stands out as a reminder of human beings' capacity to put aside differences, lay down arms and join together in a sacred moment, a moment that perhaps could last into eternity. 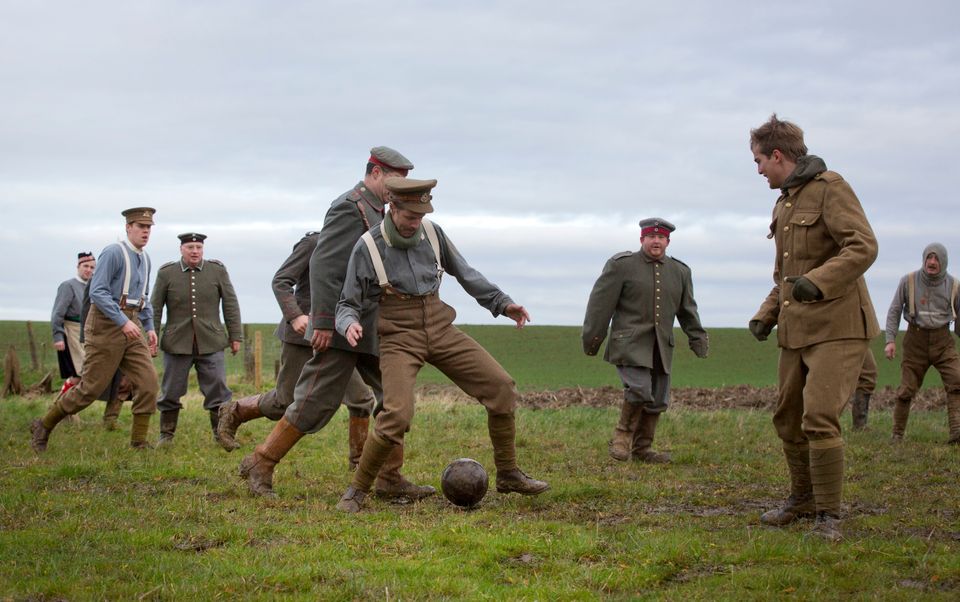 1 / 28
Re-enactors, from various living history groups, are dressed in World War I British and German uniforms as they kick around a soccer ball during a re-enactment of the 1914 Christmas Truce in Ploegsteert, Belgium on Saturday, Dec. 20, 2014.
ASSOCIATED PRESS