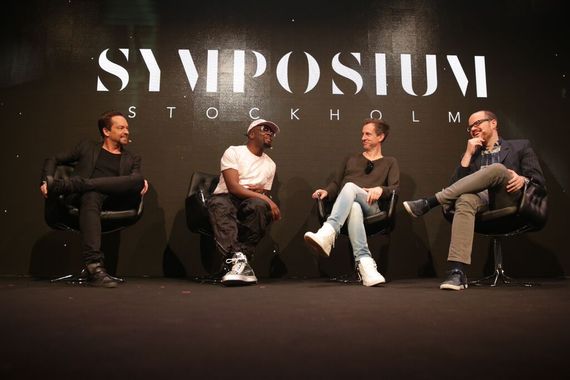 "Well I mean I love Sweden. I've been coming out here since 1999. I'm just waiting for that Swedish passport, baby. You dig?"

At this past weekend's Symposium Stockholm, writer, producer, and artist Wyclef Jean made his feelings for the Scandinavian country known during a panel he sat on with Andreas Carlsson and Peer Astrom--both extremely successful pop producers and songwriters--as well as Andrew Hampp, a Senior Correspondent at Billboard. There have been rumors for some time that Wyclef was going to leave both America and Haiti and retreat to Sweden, and the topic quickly came up as the four men spoke. But why?

"You know Swedish producers, the vibe of the writers. Man, it's just feel good music."

Ask anybody in the music industry where all the best talent comes from, and Sweden is the obvious answer. Some of the best-known pop hits and the most successful names (usually behind the scenes) of the past several decades are all from the country, which only has ten million people, but more than makes up for their smaller population with plenty of noise.

Wyclef has been busy for the past few years, both with his music career and some rather important other projects. A few years ago, he ran for president of Haiti, and when he was disqualified due to a technicality, he used his influence in his home country to help get another man elected. Coming back to music after that wasn't as difficult as one might think, according to the Grammy-winner, who offhand commented that "Running for president was hard. Like being a rockstar is easy."

As he gets back into music--some of which has recently been in collaboration with EDM DJ Avicii, who is one of the bigger stars to come from Sweden in a while--Jean might be spending more time in the country. When asked outright if he was planning on moving up north, Wyclef didn't bat an eye.

"Definitely. I'm usually out here so much anyway you know what I mean, it's only right. So we gonna figure that out. I hope that my label's listening. You know so we could work on that advance you know what I mean. Matter of fact, you don't gonna give it to me, just put it towards the crib in Sweden and I'm good."