Wynn Resorts, the third-largest casino operator in the U.S., recently mailed a "2012 General Election Voter Guide" to its 12,000 employees in Nevada. The bound booklet, obtained by The Huffington Post, identifies candidates whom the Las Vegas-based company supports, leading to what one worker described as a feeling of being pressured to vote for candidates favored by the boss. This pressure is compounded by the behavior of company CEO Steve Wynn, who has used corporate time and media to attack President Barack Obama's policies.

The 67-page booklet is titled "WE Vote," a reference to the Wynn Encore resort brand, and opens with a letter from President Marilyn Spiegel. The preferred candidates, she writes, "support policies that help promote a friendly business and living environment to Wynn Resorts, our approximately 12,000 employees, and the gaming industry as a whole."

The favored candidates for state and local offices are identified throughout the document with a Wynn logo. No federal candidate appears with a logo, but the CEO's rhetoric and the company PAC's donations exclusively to Republican candidates and the leadership PAC of powerful Nevada Democrat, Senate Majority Leader Harry Reid, offer their own clues.

UPDATE: 11:15 p.m. -- Wynn Resorts CEO Steve Wynn told the Huffington Post late Friday that he has always encouraged his employees to vote Republican. "It would be a complete disaster if Obama wins, which is why I’m urging my employees to vote for Romney," he said.

Original version of this article resumes:

Employment experts say that the Wynn voter guide represents an unprecedented level of organization and investment by a corporation seeking to push its employees to vote a certain way.

"We've never seen something like this before," said Deborah Weinstein, founding partner of Philadelphia's Weinstein Firm, a boutique law office that advises public companies on labor and employment issues. "It is certainly a post-Citizens United invention," the veteran lawyer said, referring to the landmark 2010 Supreme Court decision that greatly expanded the rights of corporations to engage in political speech and nullified certain employee protections against it.

Michael Johnson, CEO of the workplace compliance training firm Clear Law Institute in Arlington, Va., agreed, telling HuffPost that prior to this year, "I don't recall seeing companies suggest to their employees who they should vote for."

A spokesman for Wynn Resorts, Michael Weaver, initially denied that this was the company's first printed voting guide, telling HuffPost that the company "does this every year" and had sent around a similar employee voting guide in 2008. Weaver later reversed himself, admitting that Wynn Resorts didn't create voter guides until 2010, months after the Citizens United ruling. He sent HuffPost the 2010 guide, which he said had been made available to workers online.

While the Wynn Resorts Ltd. PAC has not contributed directly to the campaigns of either GOP nominee Mitt Romney or President Obama -- but has backed Republican congressional candidates -- one Wynn Resorts employee, who agreed to speak about the mailing on the condition of anonymity, said there was little doubt in her workplace for whom employees were supposed to vote.

"If I had an Obama bumper sticker, I'd be scared for my job," she said. Other Wynn casino workers refused to talk to reporters.

"We're not supposed to talk politics at work," the woman said, which is why she said she was shocked when the document arrived in the mail. A registered independent, she's worried what might happen to employees who are caught backing non-Wynn-sponsored candidates outside work, like with "a yard sign, a donation or a blog [post]."

Asked what prompted this fear, the woman said it had a lot to do with Steve Wynn, the flamboyant CEO and chairman of Wynn Resorts.

During the past few years, Wynn has emerged as one of the nation's leading Republican donors, known for his fiery diatribes against Obama during TV appearances and corporate conference calls about quarterly earnings. A onetime Democrat, Wynn has repeatedly blurred the line between his business interests and his personal politics.

"Steve Wynn is a powerful man, and this is a small town," said the worker.

One reason Steve Wynn's views casts a long shadow over the Wynn Resorts voting guide is that the document itself doesn't actually say much. Most of its 67 pages are taken up with brief, sugar-coated biographies of candidates running in down-ballot races for local office, including the Nevada state Assembly and the Clark County School Board.

Moreover, the contributions of the Wynn Resorts PAC in local races don't line up along party lines. Instead, like most other casinos, Wynn Resorts' donations are skewed heavily to favor incumbents over challengers, regardless of the candidate's political party. From the company's perspective, incumbents are a safer bet, given that people already serving in public office tend to be reelected.

The revelation that Wynn Resorts wrote a voting guide in 2010 means the company was among the first big employers in the post-Citizens United era to formally advise employees of its political preferences. Koch Industries, controlled by billionaire brothers Charles and David Koch, also sent out voting guides in 2010 and again in 2012. This year a growing list of CEOs, including real estate tycoon David Siegel and ASG Software's Arthur Allen, have sent emails to their workers suggesting that Obama's reelection would threaten their jobs.

Have you received voting guidance from your employer? The Huffington Post wants to know about it. Email us. Your information will be kept confidential.

It's a strategy that Romney personally endorsed in June, telling business owners, "I hope you make it very clear to your employees what you believe is in the best interest of ... their job ... in the upcoming elections." Romney made the comment on a conference call hosted by the National Federation of Independent Businesses, a lobbying group that plans to host an Oct. 30 call to "train" business owners how to speak to employees about the election.

Johnson, the Clear Law compliance consultant, pointed out that "unions have for years provided sample ballots to its members showing which candidates the union endorses," but added that "the union, of course, doesn't have the ability to fire, or threaten to fire, a member because he or she votes for another candidate."

Weaver, the Wynn Resorts spokesman, said that the guide "allows employees to make better informed decisions" and that the Wynn logos next to certain candidates were only there "for transparency."

But the Wynn Resorts worker who agreed to speak said she was offended at being instructed on which candidates her employer backs. "I understand that my corporation can endorse people, and I understand that there's a political climate and a business climate," she said. "But I never asked for who Wynn would prefer in local races, and I'm going to vote how I vote for my personal situation."

According to Johnson, there's a downside to attempting to influence how employees vote. "I'm not sure that most employees are going to be swayed in their vote by an email from their CEO," he said, "and that email runs the risk of alienating lots of employees who support the opposing candidate."

The Wynn Resorts worker, who said she was still undecided how to vote, put it more starkly: "Now that I'm being told who to vote for by my overlord, maybe I'll just vote for Obama."

Here's the cover of the 2010 Wynn Resorts Voter Guide. Click on the image to see inside: 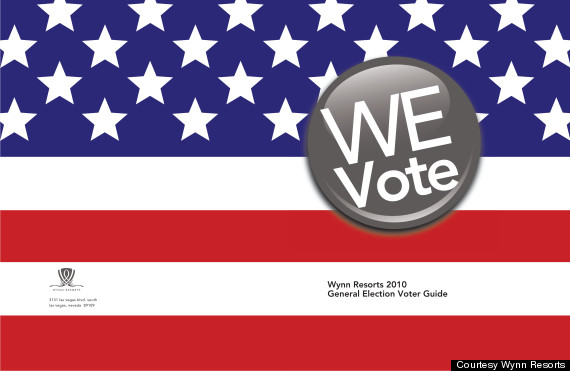 Clarification: The story has been updated to note that the Wynn company PAC has donated money to the leadership PAC of Nevada Democratic Senate Majority Leader Harry Reid.