Well, this certainly puts the size of our planet in perspective.

The sun unleashed an enormous solar flare on Wednesday at 12:22 p.m. EDT. NASA's Solar Dynamics Observatory captured a remarkable photo of the flare -- being called the largest of the year so far -- and the space agency added an image of Earth for scale.

(Story continues below image and GIF.) 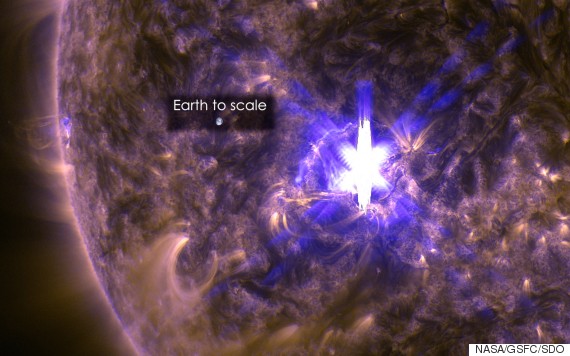 The X2.2-class solar flare of March 11, 2015, seen as a bright flash of light in this Solar Dynamics Observatory image. Earth is shown for scale.

The sun emitting the solar flare, seen in 304 angstrom light.

The flare was directed toward Earth, Space.com reported, and that meant it caused a bit of trouble for earthlings. According to NOAA's Space Weather Prediction Center, radiation released by the flare caused a radio blackout.

Solar flares occur when magnetic energy that has built up in the solar atmosphere is suddenly released.

Flares are rated as a class B, C, M, or X, according to their intensity. The recent flare was rated X-class, which is the most intense category. Within that class, flares are numerically ranked, with higher numbers being more intense. This flare was classified as an X2.2, which means it was twice as intense as an X1 but less intense than an X3.