For "Breaking Bad" creator Vince Gilligan and "Hunted" creator Frank Spotnitz, writing for "The X-Files" was their first job in television.

That wasn't the case for Howard Gordon, but he said in a recent interview about the show that his time as an "X-Files" staff writer and producer had a big impact on him.

How to sustain suspense; how to create a story "engine" to which other writers can add and yet retain their own voices; and how to scare and surprise the folks sitting on their couches at home -- Gordon learned or honed a lot of those skills during the first four seasons of "The X-Files" (the show's classic era, in my humble opinion).

What he learned certainly came in handy during the long, successful run of "24," where Gordon rose to the level of executive producer/showrunner. And in a way, "The X-Files" made "Homeland" possible: Gordon and Alex Gansa started out as writing partners on the Fox show, and several years ago, they reunited to work together once more on the hit Showtime drama.

The 20th anniversary of "The X-Files'" debut arrives in September, and to commemorate this pop-culture landmark, there's a reunion panel with the cast, creator Chris Carter and several producers on Thursday at San Diego's Comic-Con International. HuffPost TV will be in San Diego to cover that event, and don't miss our recent interviews with star Gillian Anderson and writer/producers Gilligan and Spotnitz, both of whom shared memories about their time writing for Mulder and Scully.

Below, Gordon discusses what he learned from "The X-Files" and the friendly but intense competition in which he and his colleagues engaged during the show's early days. (This interview has been edited and condensed.)

"The X-Files" is a show that has produced a lot of influential TV writers and directors and crew members, and I'm wondering why you think that's the case.

It was such a special show, and unique in its ability to tell stories that were stand-alone and compelling, [but it also had] conspiracy theories and monsters of the week, and it had the satire and parody that ["X-Files" writer] Darin [Morgan] really defined. Vince [Gilligan] did his version of that as well. So it was a show that had its own voice, but also allowed for other voices to add to it. The base was so strong that it allowed for grace notes. I think Chris was wise enough to allow those voices in and give them a chance to be heard.

Chris created a show that had an engine and a voice, and it was incredibly elastic and grew. It attracted talented people. Vince had written a couple of brilliant screenplays before that, and "X-Files" was great for his voice. Certainly you learned what you can do and what you can't do on television, and what works and what doesn't. It was kind of like film school for him. I mean, he'd done these really, really inventive screenplays, some of which got made but none of which kind of hit the sweet spot. They were always kind of more interesting on the page than they were as movies. With "Breaking Bad," you really can see a lot of the voice from those early screenplays and from his "X-Files" episodes.

Going back to "Homeland," it was a good pilot, and we attracted good writers because it was a pilot that people thought they could add to -- and lo and behold, they have. I don't know whether it's a chicken-or-egg thing. I think you have to start with a pilot that draws writers who believe they can add to the story. I do find that shows that last and have longevity -- I mean, aside from the Aaron Sorkins and the David Kelleys [who are known for shows that are much more driven by a single voice] -- I find that a show is really special when it is greater than the sum of any of its parts or any single voice. And "The X-Files" really had both a conceit and an architecture that allowed for many voices, and it had Chris at the helm who allowed those voices to flourish and didn't feel the need to keep the show in a box.

Right. And just to parallel the whole learning experience of it all, for a while in the '90s, I was the editor of the Official X-Files Magazine. It was the first TV set that I ever visited. Everyone up there in Vancouver was so generous with their time and so good at what they did that it was like going to school on reporting.

I absolutely identify with that, with it being the place where I learned a lot. I really, really learned what it was to produce. I learned from my colleagues. I think what was good about that -- and it was good about "24," and it has been good about "Homeland" -- is the collaboration and the competition. It's a learning experience, and you are protected against your weaknesses by the people around you. It's a wonderful collaborative medium when it's good, and "X-Files" couldn't have been a better grad school. We were all each other's teachers, and I think we all benefited from that combination of collaboration and healthy competition.

Do you look around and see the influence of "The X-Files" on TV even now?

Oh, yeah. Aside from whatever cultural impact it had, and it was really kind of a phenomenon in its time, but I do think it raised the bar on network television: "Here's what can be done." You look at it and you see it in everything from "CSI" to "Bones." I think ["Bones" creator] Hart Hanson wrote a Mulder and Scully reference in the pilot for "Bones." I think he sort of hung a lantern or got ahead of anybody who might [compare the two lead characters to] Scully and Mulder. In "CSI," I see some of the science that "X-Files" had. I may be wrong about this, but there was an intelligence behind [the science on the show]. Sometimes it was sensational -- more National Inquirer than National Geographic -- but it was a combination of the two that made it really fun and scary.

Well, my favorite episode is [the Darin Morgan classic] "Clyde Bruckman's Final Repose," which won the Emmy. I still have it literally always within arm's reach. That's how much I love it.

I have probably watched that a dozen times.

It's brilliant. I worked with Darin on "Awake" last year a little bit, and what a treat it was to just get a glimpse inside his mind.

And I knew the "X-Files" pilot was good, but I didn't know quite how good it was, until you saw that the DNA for the nine-year run was all evident in that pilot. When you watch a pilot, so many things can go wrong, and when everything goes right, you appreciate what a miracle it is. I think I understand now, having been doing this now for 25 years, just what a miracle it was.

But then when ["X-Files" writers] Glen [Morgan] and Jim [Wong] handed in their script for "Tooms," there was a simplicity there, but it was way different than the pilot -- and yet it was completely in sync with the pilot. Suddenly it was like, "Wait a second, it doesn't have to just be abductions." Paranormal stuff could be in there, but [the show could incorporate other genres]. [I realized] smart horror movies and thrillers could be done. I read that script, flipping the pages, and suddenly I thought, a whole subgenre of the "X-Files" -- the monster show -- was born. That was a giant epiphany for me.

There was a clarity and a simplicity to Glen and Jim's writing, and at the same time an excruciating quality in their ability to sort of exploit a moment. They would take their time, and you were squirming, because they were never in a rush. They would make you squirm and then squirm some more as you watched. They were using some horror movie tropes, but they were done with a kind of clarity and intelligence that was a big eye-opener to me. But "The X-Files" had many eye-openers. I mean, when Darin wrote his first script, I was blown away. When Vince wrote his, similarly, I said, "Wow!"

I talked to Vince about this, too, about the actual mechanics of suspense, which you obviously built on further with "24" and "Homeland." Do you feel "The X-Files" gave you a grounding in those areas that you're still using now?

How about a favorite episode that has your name on it?

This is really more anecdotal than anything else: It was "Sleepless," and that was the first one that I did alone when Alex and I split up [as writing partners]. When you're part of a partnership, you're never quite sure what you've done and what the other person has done, and [it's big to] know you can do it alone. It was the first time I'd written something on my own since college. Alex and I had been together for eight years or something and we came out here together. We were still great friends, obviously, but I was [on my own for this episode].

[My first solo episode was supposed to be] a completely different episode about genetic engineering and some rural thing, and later, pieces of it showed up in other episodes [but the episode itself went by the wayside]. I spent a month and a half on an episode that I had to throw out, and suddenly the first episode that I was writing alone was due in a very short period of time. I couldn't sleep, and out of that came "Sleepless." I was having a kind of nightmare, a dark crisis of the soul. Proving to myself that I could write something and having it be born out of this personal moment of crisis was [a milestone]. That's where I started working with [director] Rob Bowman, who did most of my episodes that year, and it came out really well. It was a real scramble and trial by fire.

And "X-Files" was always one of those things where I felt like you're mining for coal -- to quote Joseph Conrad, "You're mining for coal with your fingers." Always. [You always had to be] finding something new. At first, it was like you were prospecting. You could get the low-hanging fruit in that first year, and you could deal with defining Scully's mother and father and Mulder's [personality]. You had all those great things that you got to define, but then suddenly, you'd settled the territory and there was less room. You had to build up rather than build out.

And then you got the possessed cats.

And that's where I stopped watching. [laughs]

Note: On a 2012 Talking TV podcast, Ryan McGee and I discussed one of our favorite "X-Files" episodes of all time, "Jose Chung's 'From Outer Space.'" That podcast can be found below and here.

'The X-Files' Anniversary: How Mulder And Scully Led To 'Homeland'
&quot;Breaking Bad,&quot; Season 5 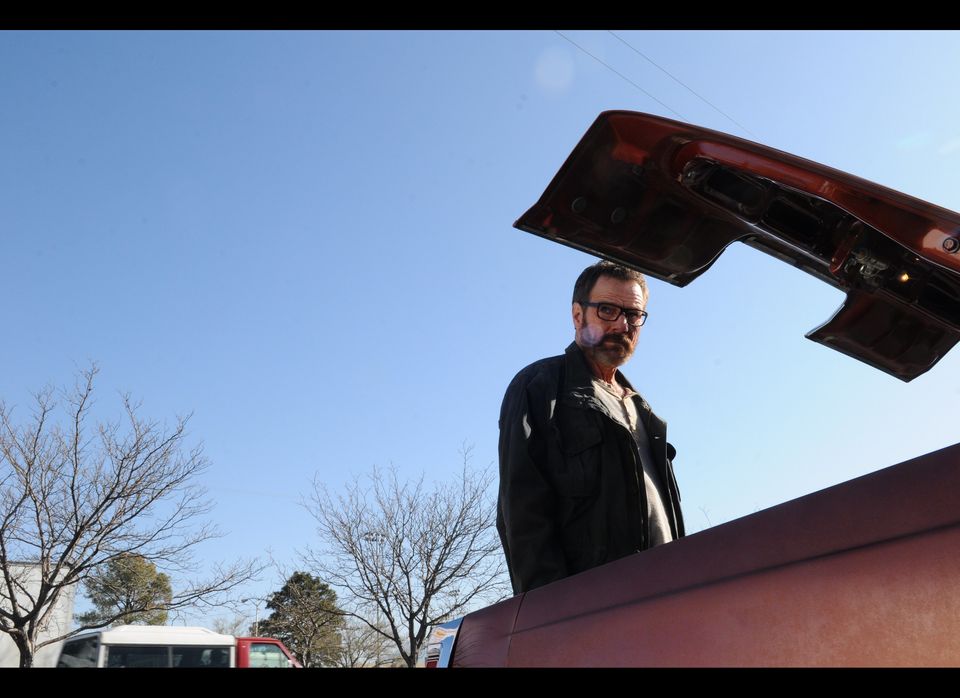