"The X-Files" reunion at Comic-Con International was easily one of the most anticipated events of the 2013 convention and for fans of the late Fox series, which is celebrating its 20th anniversary, stars Gillian Anderson (Dana Scully), David Duchovny (Fox Mulder), creator Chris Carter and writers/producers Howard Gordon (who went on to co-develop "Homeland"), Vince Gilligan (who created "Breaking Bad") and more did not disappoint.

Duchovny and Anderson kicked off "The X-Files" reunion at Comic-Con by "playing" Mulder and Scully again: They came out on stage with flashlights, much to the delight of the crowd.

The stars and producers then took a trip down memory lane and recalled many of their favorite episodes and characters, and answered fan questions about the show.

There were several allusions to and questions about the subject of Mulder and Scully having sex. Did they ever actually get together, Duchovny mused? "Well, something happened. Because we have a child," Anderson said. She recalled that a sex scene between them had been shot at one point, but never aired. "It's somewhere," the actress added.

A fan asked if Mulder and Scully were to ever go on a date, what would they do? "Have sex," Anderson replied matter-of-factly. "Then maybe dinner?" Duchovny retorted without missing a beat. "I think it would be barbecue," Carter added.

When another fan asked when they thought that the characters were in love, Carter said, "I think it was when [Scully] first walked into [Mulder's] office in that basement," eliciting an "awww" from the crowd. "Scully was kind of my fantasy woman," he later added. "Strong, smart, opinionated, tough -- all those things I like. It was kind of a fantasy relationship [between Scully and Mulder] in that it was intellectual as much as anything else."

"I didn't realize that Mulder was so cool until a few years later," Anderson added. "Then I thought, 'Damn, I should have gotten there sooner," she said as the fans erupted in laughter.

It was also revealed that writer John Shiban's son played Scully's baby William on "The X-Files." He was only six-weeks-old at the time of shooting, but he came out on stage looking all grown up. "He looks like me. That's our son," Anderson joked to Shiban. When Carter's asked where William would be in 2013, Anderson says in jest, "He's in rehab."

Moderater Michael Schneider of TV Guide Magazine tried several times to get Carter to announce a third "X-Files" movie, but there was no news on that front. Anderson, however, did say "a film would be great" after she shot down the idea of doing a limited series a la the miniseries version of "24" that is coming back.

Duchovy said he always thought they would do more movies. "I always thought whenever we can come back together, we would as much as we can. So we will," he explained.

Anderson also spoke about playing such a strong female character. "I think just in terms of the feedback that I've gotten from young girls, young women and women the last couple decades, Scully had quite a huge impact on people [both her personality and things she stood up for]," the actress said. "She was also a decent human being. People listened to her, she got to boss people around." Anderson said that she's always heard that thanks to Scully, more women went into science when the show was on the air.

Why'd it take her so long to return to TV? "Mostly because of the time commitment. When the series ended, I didn't know if I wanted to be on another set again, period, for a long time, just out of exhaustion," Anderson said. "But after enough time passed, I was looking at the material coming my way after saying no for such a long time -- it's just about timing. When 'The Fall' came across my desk, it was exactly the the type of material I respond to and would want to watch and I feel very strongly about that piece. And initially, NBC then offered me a short arc on 'Hannibal.' I thought it would be the three episodes and I said I wouldn't be likely to do more than that [but I had so much fun with Mads Mikkelson, I kept doing more]."

Gilligan said that "there'd be no 'Breaking Bad' without 'The X-Files.'" He added that his first experience with the show was as a fan, noting, "By the end of the first commercial break, I was hooked." The Emmy nominee said that he learned everything he knows from his seven years on "The X-Files." (For more from Gilligan on how "X-Files" influenced "Breaking Bad," click over to my interview here.)

When the conversation moved to guest stars, Gilligan recalled that "Breaking Bad" actor Bryan Cranston appeared in a Season 6 episode of "The X-Files" called "Drive." Gilligan said that working with Cranston on "The X-Files" kept the actor at the forefront of his mind when he started thinking about casting "Breaking Bad's" central character Walter White. Who knows who would've played the role if it weren't for "The X-Files."

Moderator Schneider made one last effort to talk about another "X-Files" movie with Carter. "You need a reason to get excited about going on and doing it again, because it's hard, hard work, but this is very inspirational," the "X-Files" creator said coyly of a third "X-Files" movie.

At the end of the Comic-Con "X-Files" 20th anniversary panel, Anderson pointed to a standing cardboard poster of Scully and Mulder and said she'd auction it off for charity. "This is how we're going to get the movie made," Duchovny joked. "This is our Kickstarter," Anderson retorted as fans shouted out bids. (It got up to near $3,000.)

Gillian jokingly auctions off a standee of she & David. "It's our Kickstarter!" #xfiles20sdcc pic.twitter.com/gTtc6DQFj9

The truth is out there: There's no Kickstarter for the show, but maybe, just maybe there's a third "X-Files" movie in our futures.

Update: During the course of the panel, the cast and writers talked about some of their favorite monsters, episodes and moments, and if you're dying to know what those were, you can watch the entire panel below: 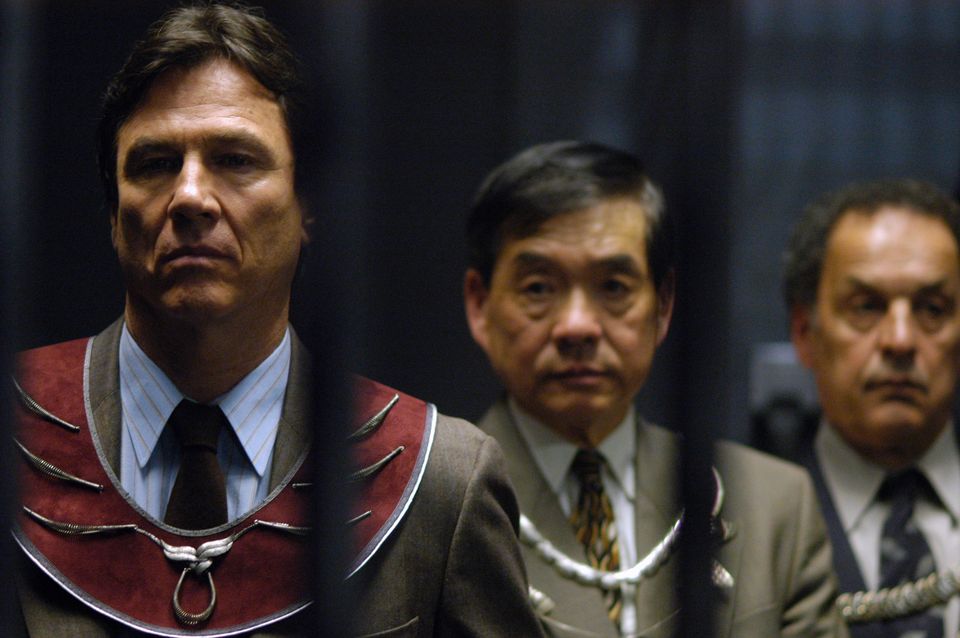