Most political polls and pundits declared Governor Romney the runaway victor of the first presidential debate, while President Obama was generally credited with winning the second and third debates. However, what matters is not winning or losing debates, but whether the candidates won or lost votes because of the debates. Standard forecasting methods do not provide a clear answer to whether debate performances are accompanied by actual changes in voter preferences (i.e., whether the electorate cumulatively shifts their support one way or another around the events). A comprehensive analysis of the data from the YouGov/Xbox poll shows that Romney made a sizable gain after the first debate and that Obama cut back into that gain after the second and third debates. Overall, across the 30 days that included the ups and downs of the four most important preset events of the campaign, Romney had a net gain of 1.4 percentage point relative to Obama. 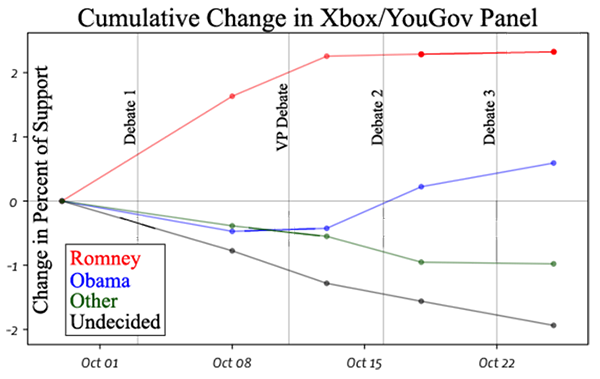 Since Sept. 28, the YouGov/Xbox poll has conducted nearly 400,000 interviews with Xbox LIVE users. The opportunity to interview many of the same people repeatedly creates a "panel" of users who are asked how they intend to vote at different points in time. This process affords us the ability to draw insights that are not possible by looking at the aggregate numbers from typical national polls, which are subject to substantial sample variation and other noise. Specifically, we can measure whether individual voters' opinions are actually changing over time. The data -- comprised of around 20,000 paneled users for each week -- indicate that voters' preferences have clearly shifted.

In the wake of the first debate, Romney benefited from a 1.5 percentage point improvement among Xbox users, while Obama lost roughly half a point. After the vice presidential debate, Romney's improvement continued, albeit more modestly, as he gained just over half a percentage point, while Obama recovered some of the ground he had lost. The second and third president debates saw further gains for Obama of a little more than half a point and a little less than half a point after each of these, respectively, while Romney remained relatively flat during the same time. In every single week, the number of paneled Xbox LIVE users who said they were undecided or voting for another candidate declined.

What has been the cumulative impact of these changes over the last month? Overall, Romney has improved roughly 2 percentage points with Xbox LIVE users, and those gains occurred almost entirely during the period between the first two debates. President Obama has made up some of the lost ground due to his strong showing in the second and third debates. He now stands roughly 0.6 percentage points ahead of where he started in late September, though there is still a net shift of approximately 1.4 percentage points in Romney's direction over this period.

Mike Malecki, Doug Rivers, and Brian Stults (YouGov) contributed to the data work and writing of this article. In the interest of disclosure, I help run the Xbox/YouGov poll in my capacity as an economist at Microsoft Research.