Paleontologists in Canada have discovered fossils of a new 2-ton, 20-foot-long horned dinosaur that roamed the Earth about 80 million years ago. And its headgear would've put on quite a show for the ladies.

The dinosaur, a distant cousin of Triceratops called Xenoceratops foremostensis, is one of the oldest specimens known to date of the ceratopsid group. The beast's name, Xenoceratops, translates to "alien horned-face," referring to its strange pattern of horns on its head and above its brow, and the rarity of such horned dinosaurs in this part of the fossil record.

"It seems to have the general types of ornamentation that we see taken to even greater extremes in later ceratopsids," said David Evans, a paleontologist at the Royal Ontario Museum. "That suggests the elaborate headgear evolved earlier." [Album: Animals' Amazing Headgear] 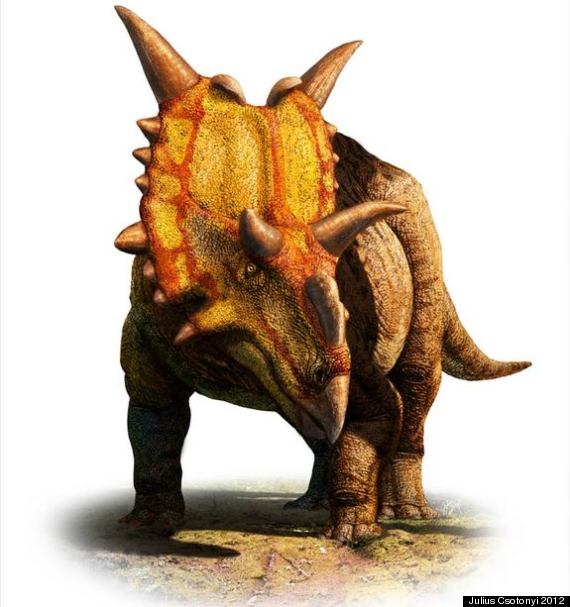 Xenoceratops (meaning "alien horned-face") had massive spikes at the top of its head, two hooks jutting from its forehead, and a ruffled shield around its neck.

A dinosaur in a drawer

In 1958, paleontologist Wann Langston Jr. discovered fragments of three skulls (now known to belong to Xenoceratops) in a rock formation in the badlands of Alberta, Canada. Though the area is now scrubby woodlands filled with hoodoos and sandstone hills, between 77 million and 90 million years ago, the dinosaur's stomping grounds were part of a river system filled with lush vegetation.

But Langston was busy with other discoveries, so he tossed the fossil fragments into a drawer at the Canadian Museum of Nature in Ottawa and promptly forgot about them.

In 2003, Evans and his colleagues learned of the fragments. The team was trying to fill in gaps in the fossil record for the late Cretaceous Period, when some of the most iconic dinosaurs, such as Tyrannosaurus rex and Triceratops, evolved.

As they pieced together the skull fragments and analyzed the distinctive ornamentation on the skull, they realized that Xenoceratops was a completely new species.

"The frills and hooks are the calling card of the ceratopsian species," Evans told LiveScience. "We knew instantly that it was a brand new type of horned dinosaur." 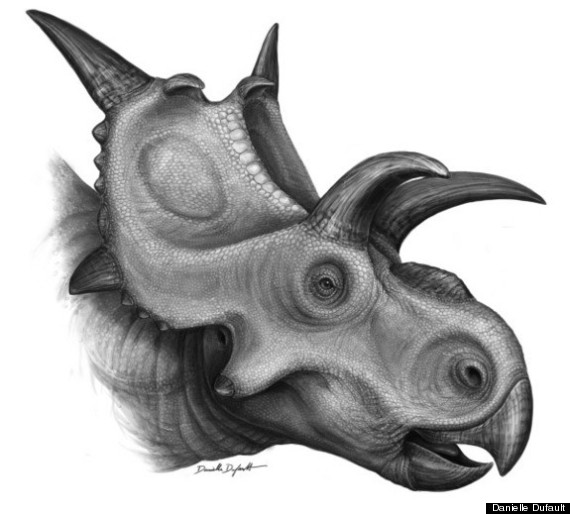 Xenoceratops, a newly discovered Cretaceous-era dinosaur, likely grazed on cattails and ferns in a primeval forest in what is now Canada.

Xenoceratops was about the size of a rhinoceros — about 20 feet (6 meters) long including the tail — and weighed about 2 tons, Evans said. The dinosaur used its birdlike beak to graze on the cattails, ferns and flowers in primeval river deltas.

The species most distinct feature, however, is its spiky head: Two hooks jutting from its forehead, two massive spikes rest at the top of its head and a frilly shield adorns its neck.

The new species helps fill in a gap in the evolutionary record, said Andrew Farke, a paleontologist at the Raymond M. Alf Museum of Paleontology in Claremont, Calif.

"The bits of anatomy that are preserved on this species give us a lot of great information about how horned dinosaurs as a group evolved," said Farke, who was not involved in the study.

The stags of the dinosaur world, male Xenoceratops probably used their outlandish headgear to show dominance or impress the females, increasing their odds of reproducing, Evans said.

"Evolution sometimes produces some pretty amazing -- and sometimes really bizarre -- structures that maybe to us don't seem particularly attractive and menacing," Evans said. "But at the same time they were really important for that species to reproduce."

The dinosaur is described in the October issue of the Canadian Journal of Earth Sciences.