Mysteriously, most of the gas xenon that scientists expected to find in Earth's atmosphere is missing. Now, researchers say they might have the answer to this puzzle: This noble gas, which usually does not bond with other atoms, may chemically react with iron and nickel in Earth's core, where it's held.

Xenon is a noble gas, so, like other noble gases, such as helium and neon, it is mostly chemically inert. Scientists have long analyzed xenon to study the evolution of Earth and its atmosphere.

Strangely, atmospheric levels of xenon are more than 90 percent less than scientists would have predicted based on levels of other noble gases such as argon and krypton. [8 Chemical Elements You've Never Heard Of] 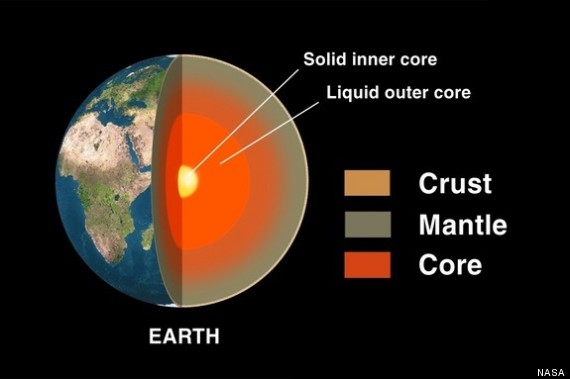 Earth has multiple layers: the crust, the mantle, the liquid outer core and the solid inner core.

Although some researchers have suggested that this "missing" xenon may have escaped from the atmosphere into space, the majority of scientists think it is hidden in the Earth's interior. However, investigators have long failed to find a way in which Earth might incorporate this gas into chemically stable compounds —. For instance, there is no known way for ice or sediments might to rically capture xenon on Earth, meaning it should just escape into the atmosphere.

Past research had suggested Earth's core might hold xenon. However, "all the previous attempts to implicate the capture of xenon in the Earth's core have failed," Ma said.

Earth's core, which contains about one-third of the planet's mass, is made of iron and nickel. In 1997, scientists reported experiments that suggested xenon would not react with iron.

"Through a careful analysis of their work, however, we found that the experiment was carried out only up to 150 gigapascals, a pressure far from the Earth's inner-core pressure of 360 gigapascals," Ma said. (In comparison, 1 gigapascal is more than nine times greater than the pressure at the bottom of the Mariana Trench, the deepest part of the ocean.)

This past research also theoretically extrapolated what might happen if xenon were trapped at the high pressures found in Earth's inner core, and concluded that xenon would not bond with iron. However, those prior studies assumed xenon would form a so-called "hexagonal close-packed lattice" — essentially, a lattice of atoms resembling a solid whose bottom and top faces are hexagons and whose side faces are rectangles. This assumption was made because iron atomsnormally form this kind of structure with other iron atoms.

However, Ma and his colleagues reasoned that, if the structures of iron-xenon compounds are different, they could form a compound. Their calculations now suggest that at the extreme temperatures and pressures found in Earth's core, xenon can bond with both iron and nickel. The most stable of these molecules are ones with one xenon atom and three iron atoms — XeFe3 — or one xenon atom and three nickel atoms — XeNi3. XeFe3 forms cubic lattices, while XeNi3 forms lattices whose top and bottom faces are hexagons and whose side faces are triangles.

These findings suggest Earth's core may hold all of the missing xenon. "We do hope future high-pressure experiments can be carried out to confirm our predictions," Ma said. Such high pressures could be achieved by squeezing objects between diamonds.

However, for those high-pressure experiments, "a high temperature of more than 6,000 Kelvin (10,340 degrees Fahrenheit or 5,727 degrees Celsius) must be applied. Such a high temperature, if not properly controlled, can easily lead to the breaking of the diamonds used for pressure generation. This might be the major obstacle for the experiment."

It remains uncertain what effects, if any, these xenon compounds might have had on the evolution of Earth's core. "This needs to be more deeply analyzed," Ma said.

The scientists detailed their findings online April 20 in the journal Nature Chemistry.