The Pentagon recently announced the deployment of the XM-25, a new "smart gun" designed for the U.S. Army's counterinsurgency operations in Afghanistan.

The XM-25 is said to be the first of its kind. As reported by the BBC, the weapon "uses a laser guidance system and specially developed 25mm high explosive rounds which can be programmed to detonate over a target."

A microchip embedded into each XM-25 shell allows the shooter to take aim at targets that have taken cover. AFP

[The] air-bursting shells [can travel] up to 2,300 feet (700 meters), well past the range of most rifles used by today's soldiers [...] allowing troops to neutralize insurgents hiding behind walls, rocks or trenches or inside buildings. [...] If, for example, an enemy combatant pops up from behind a wall to fire at US troops and then ducks behind it, an XM25 gunner can aim the laser range finder at the top of the wall, then program the shell to detonate one meter beyond it, showering lethal fragmentation where the insurgent is seeking cover."

"This is the first time we're putting smart technology into the hands of the individual soldier," Lieutenant Colonel Chris Lehner, program manager for the XM-25, told AFP.

The image (below) illustrates how the XM-25 works. Take a look and share your opinion about the military's new "smart gun." 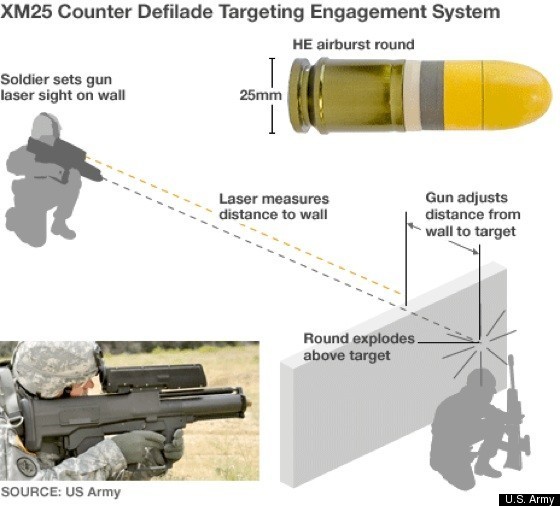