It's the best of the bunch. In a season of crime fighter against crime fighter, super power vs. super power films, this mutant-on-mutant spectacular has the most depth, innovation, majesty and visual wonder. Compared to Batman v Superman: Dawn of Justice (a convoluted snore) or Captain America: Civil War (bombastic and contrived), X-Men: Apocalypse is the one that's worth the price of admission. 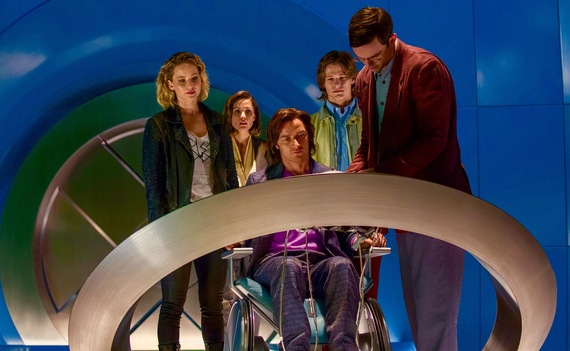 This film's two competitors focused on reckless crime fighting, collateral damage and public outcry. It's like they were both hatched in the same, sterile lab. However, screenwriter Simon Kinberg's (X-Men: Days of Future Past) storyline is never predictable, handles the large JV and Varsity team of heroes better and draws to a fulfilling ending.

Director Bryan Singer, who has had his hand in the series as director and or producer, is in the driver's seat and he has his stuff together. The pacing in the beginning is a bit slow and methodical, but as he sifts his way through a script that is determined to set up the subplots of nearly a dozen lead and supporting characters, the proceedings move into high gear. Have some patience; you'll need it initially. But once the storyline gels and the direction takes hold, the film takes off.

Going back thousands of years, Apocalypse (Oscar Isaac) was the granddaddy of the mutants. He gained his power by zapping the strengths of other mutants. This feat gave him invincibility, dominance and a supremacy that could overwhelm anyone or anything. When he wakes up in modern times, 1983, he is shocked and dismayed to see that so many mutants are living in the shadows of humans as second-class citizens, viewed as freaks and wasting their powers. With an end target in mind, he gathers misfits and miscreants and assembles his own legion: Psylocke (Olivia Munn, Ride Along 2) with the power of telepathy, telekinesis and ninja abilities; Angel (Ben Hardy) who flies and has feathers that can kill; Ororo Munroe (Alexandra Shipp) who can control the weather; and the very moody Magneto (Michael Fassbender) who has just lost his family, blames humans and can move mountains with his magnetic powers. Apocalypse's basic plan is to destroy the world, take its remnants and build a place more to his liking -- one that he will rule.

The veterans from the original X-Men, a group of super heroes who fought for peace and equality between humans and mutants, have largely dispersed. There is Raven/Mystique (Jennifer Lawrence) the shapeshifter and Professor X (James McAvoy) a very powerful telepath. Both are nurturing a new league of young X-Men: the telepathic and telekinetic Jean Grey (Sophie Turner, Game of Thrones); Cyclops (Tye Sheridan) who emits powerful beams from his eyes; and Nightcrawler (Kodi Smit-McPhee) who is agile and can teleport people.

Professor X, with his cohorts the superhuman Beast (Nicholas Hoult) and Havok (Lucas Till) who generates powerful plasma blasts, along with a Dr. Moira MacTaggart (Rose Byrne), a foremost authority on human genetic mutation, is out to stop Apocalypse.

A clear war of good versus evil is what separates this superior screenplay from the Batman v Superman and Captain America: Civil War scripts. Audiences know who to like, who to hate and are even prepared to change their minds as characters evolve. This more traditional approach to screenwriting does the trick. The element of ancient history adds a bit of fascination. The sheer power of the mutants who can destroy whole cities, infrastructures and landscapes is amazing. Plus there is a mystical, spiritual element in this movie that is lacking in the two aforementioned films.

The mutants and their actions are aptly captured (cinematographer Newton Thomas Sigel, The Usual Suspects), placed in perfect settings (production designer Grant Major, The Lord of the Rings: The Return of the King; set decorators Geoffroy Gosselin and Anne Kuljian), stuffed into eye-catching costumes (Louise Mingenbach) and set among the right colors (art directors Ravi Bansal, Michele Laliberte, Veronique Meunier). This is a very handsome looking movie on all accounts.

Whenever McAvoy, Fassbender or Isaac are on-screen the acting goes up several levels. They lift the performances around them. Shipp and Munn as Apocalypse's stooges play the misguided card very well. Lawrence doesn't bring much new to her role as Raven. Her performance has the same preachy echoes of Katniss from The Hunger Games. The scene-stealers are Evan Peters as Quicksilver and Smit-McPhee as Nightcrawler. Both portrayals have verve to spare.

It's obvious that Bryan Singer is a champ at choreographing complicated sequences when all the mutants and their powers converge. However, he is also brilliant with smaller scenes that display humor: The X-Mansion, the home and training school of the young mutants, is about to be blown to smithereens. The highly kinetic Quicksilver is tasked with saving the day, and the teens. He goes about his work with an impish, naïve spirit that is sublime and off-kilter. It will make viewers smile. These quirky moments, interspersed with the detailed beginning, the amazing fight scenes and visions of the earth being destroyed make this episode of X-Men one of the best.

In the singular competition between super heroes Vs super heroes movies, the very inventive X-Men: Apocalypse wins. That said, all three films combined aren't as good as one Deadpool.