Today, Google is celebrating the X-rays' 115th anniversary with a special Google doodle that links directly to search results for "X-rays."

X-rays began on Nov. 8, 1895 through Wilhelm Röntgen's work with tubes and radiation.

HowStuffWorks notes, "As with many of mankind's monumental discoveries, X-ray technology was invented completely by accident."

Also known as X-radiation, X-rays is a form of electromagnetic radiation.

Google's Marissa Mayer noted that the small 'g' in today's special doodle is a homage to PigeonRank, a past April Fool's joke at the company.

Google often plays with its Google logo. Some of its most discussed doodles this year have included a Pacman game, bouncing balls and birthday cake.

See the X-rays Google doodle below: 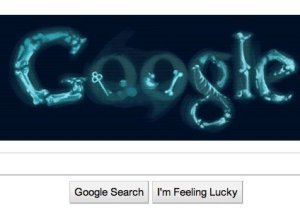