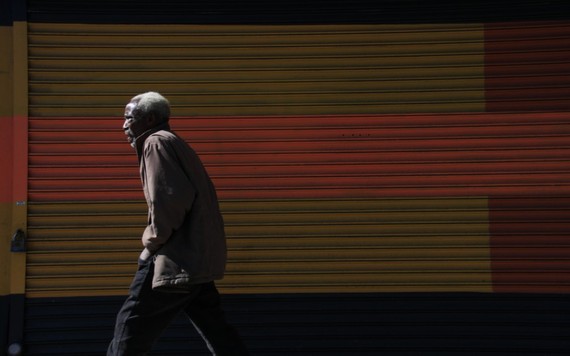 Storytelling in the visual arts context has the ability to shock and impose layers of juxtaposition that correlate with roots of history while embracing revival through subject, space and lighting choice. These three latter components caught my attention when taking in the photography of West Philadelphia artist Shawn Theodore, popularly known as xST (pronounced "exist"). His thematic works address the reality of vanishing Black neighborhoods and the sea of people enduring the loss.

His technique is street. Working in the moment and opening self to the spontaneous quarrels of possibility, his subjects are passersby operating in their daily livelihood. After an introduction and conversation, xST's muse of the moment is photographed against a colorful wall--random words and phrases, or simply unique spaces with hopes of refueling the Black existence currently fighting to stay alive. 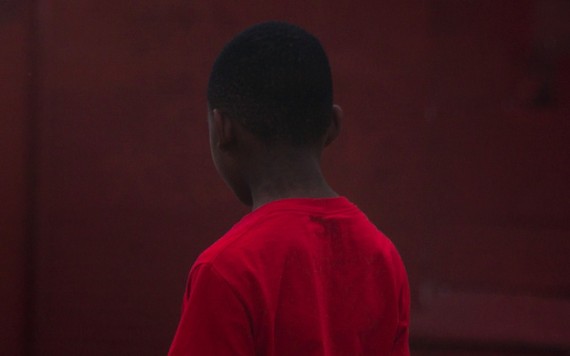 Capturing faces and spaces across Philly, New York and Baltimore, xST's work embodies the essence of Ralph Ellison's Invisible Man, acknowledges the vibrancy of character within a destructive construct, and flourishes with hope that gentrification will not wholly displace a culture.

EBONY.com's LaToya Cross spoke in-depth with the artist about his initial concept, artistic connection to the Black community and its neighborhoods, in addition to the role Philadelphia plays in formulating and understanding his artistic eye.

EBONY: What was the visual or situation that sparked this concept?

XST: The whole thing started in 2008. I didn't actually set out to be a street photographer. I met Jamel Shabazz and had this amazing time and experience with him guiding me into it. I watched how he would talk with people and how he made people want to take a photograph. I thought it was beautiful to see someone as dynamic as him have such a great dialogue with people.

When I decided to do my own work, I didn't immediately want to jump out and just do portraiture. I thought it was a bit over saturated. I'm a fan of the candid. When I started to just walk around, I started to pick up the emotional levels of where I was and where I would be and then started noticing the vibe and weight on people. Early on, I didn't know what it was or how to describe it. I didn't know that there was some type of macro psychological thing happening. Then getting deeper into it, I started realizing that what attracted me was these areas where people were getting marginalized right in front of their door.

On one side of the street, you have brand new homes with $25 million tax statements, and then on the other side of the street, it's just hard times. That started to predominate my idea. I was watching TV and they were talking about all these indigenous people getting pushed out of Africa, and I'm like, that's happening right here in my neighborhood. And the light bulb went off. It's evident. These people are feeling the pressure of being pushed out.

And then I started rereading Invisible Man. I would be walking through the neighborhood and that same sort of displacement and despair I was watching on this macro level in Crown Heights, Bushwick, Fort Greene, and all these other places that I would travel to shoot, I started to feel it on a micro level--on my level. It's like I'm here but nobody is ever looking at me or having a conversation with me. So I was invisible until somebody needed help.

EBONY: I've been really into the translation of juxtaposed imagery and messaging. I've noticed those nuances in your work. The theme can bring upon a wave of depression, but the way you capture your subject against vibrant spaces expresses elements of pride in a way. Being a street photographer and the spontaneity that comes with that, can you discuss the process in approach and final product?

XST: A lot of people don't realize that because they're in it, you know? I'm saying, 'hey, where you are right now is beautiful, man' and they're like, 'what?!' So I have to show them, and sometimes the easiest way is just giving them my phone and telling them to scroll the pictures on my Instagram account. That kind of statement about technology, it automatically chills people out.

I shoot in color. It's [about] the moment. The moment to me, sometimes it needs to be said in black and white. Some things are so magical that I can't put color to it or pull the right colors out of it. It feels more epic of course, but I'm always trying to capture people as they are, even in contrast. I try to position myself so that it's in the right light, and I don't go home and just throw it into Photoshop. A lot of people think I do, but if you look real close at the picture, you'll see deep shadows. 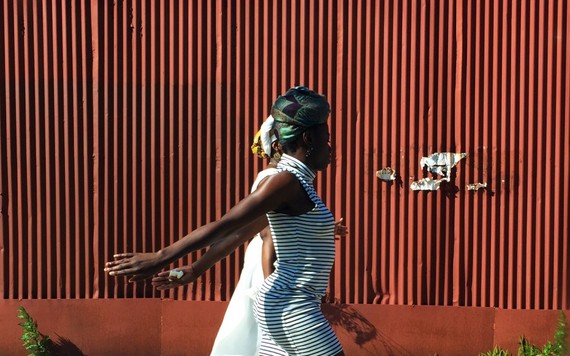 EBONY: Yeah, I can tell, and it even almost seems that the way in which you capture the photo brings a sense of power to the subject. Do you see a shift in character/attitude in the way your muses assess their situation after you share your purpose and they see themselves in this new light?

XST: Once I give them an idea of what exactly it is that I'm doing and there's a level of respect, then it's cool, and a lot of appreciation for being able to identify with something they felt that they didn't know how to verbalize. This is the only way I know how to make the rest of the world feel and understand what's going on. So talking to people and giving them the full run down becomes "I appreciate you doing this. What can I do?"

I hear a lot of that, and it's just going online, repost it, bring it up in conversation to keep it going and stay aware. Don't think that the steamroller has any care or intention to stop. What can we do as a people to reunify once we're pushed out of our place? Once Black neighborhoods are chopped up and divided, pushed beyond the borders of comfort, how do we reconnect? That's been my big thing. So I tell people to just be strong and continue our conversations, knowing that when we, Black people, talk among ourselves everyone, is watching.

EBONY: Would you consider yourself an activist in a sense?

XST: I'm not necessarily an activist or a social worker or anything like that, but I do try to talk to people to see what their goals are. If I met somebody three blocks down, a councilman or something, I'm going to drop a name and tell you to go down there because they have jobs. There may be something that I can help you with personally. So, there's a lot of watching in that way. If I see a person six or seven times in a day as I'm walking around, you start thinking what their daily lives may be, and that could be a conversation about employment and purposefulness. Who am I if I don't have something to do? That's the thing that drives me. 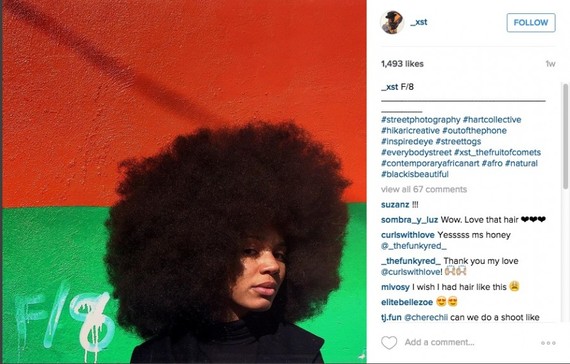 EBONY: Shooting on your iPhone 6, there's a beauty that comes across, an aesthetic that exudes vibrantly, even if the image isn't at its highest quality. Is this something intentional to further the vision and initial concept?

XST: At first I didn't have a camera that I was comfortable with. I do take my cameras out with me. I might have a bag full of cameras--a film camera, two DSLRs, sometimes my Polaroid just to mix it up. But the phone is the fastest thing I have, and sometimes these images, these moments... the only thing that I can hold in my hand that doesn't distract the subject from the moment is the phone, because they may not be aware of it immediately. A lot of the work that you see is candid, so it may not be the shot that I wanted and that's cool. A lot of those are the people that you see in a silhouette or deep contrast, and I use that as a dignifying language of this whole person that doesn't have an identity.

EBONY: In grasping the full context of your art, what was the journey like in terms of understanding your vision and then having the ability to articulate and translate it into your photographs?

XST: It was a little bit of a light bulb moment when I started to hear people tell me online, that weren't Black, that what I was doing mattered. I didn't really check for praise or anything. This was all really about me trying to exercise my creative flow. And then when more Black folks started to tell me things like, "this reminds me of so-and-so..."

It started getting really intriguing to me when I took a picture of a 90-year-old and posted it a few months later and his relatives started hitting me up like, 'Where did you get that picture? We haven't seen him in years.' For me, that's when it got deep. I connected a family that had been missing their grandfather. And it happened again with a family of a guy I didn't know, and he passed away a few days later, and his family hit me up saying "You have the last photo of him."

I started to really understand that there was a deeper purpose to it, and whatever path I was already on, I started connecting those dots. Why aren't these people connecting? And it was all these people getting pushed around with no control of their own. I asked why and started to figure it out. The neighborhoods are getting gobbled up and people have to separate, and this separation is causing families to splinter in a lot of ways. Of course, there are other factors too. That's when I started figuring out that this all makes sense. So with finding comfort in articulating my vision, I had to be strong enough to become this lighting rod. It's like I had to do it. And then getting the love and support... when it started to really kick in, it was time to get going full speed.

EBONY: Being a Philly native but having traveled and currently residing in New York, how would you say your Philly upbringing helped to shape your artistic eye?

XST: Philly is my whole art. It's literally the only city that I've hated to love and loved to hate. All the different levels of what Philadelphia is known for. I am a true Philadelphian. It's so much character. They're kind of stuck in a time warp, and there are people who are sort of like benchmarks within these different points of time. We're not deeply affected by outer trends.

It's vibrant but soulful in West Philly. I love to remember. That's what drives all of this. I love remembering how fun and beautiful and soulful it was. It's a recharge for me. And that's what I talk about with my work: being able to communicate with your neighbors and have this context to be able to pull together and just build.