Dressed in a beige skirt suit (no bunny tail), Christie Hefner, chairman and CEO of Playboy Enterprises, daughter of Hugh, and the country's 80th most powerful woman according to Forbes magazine, declares herself to be both a feminist and an activist. 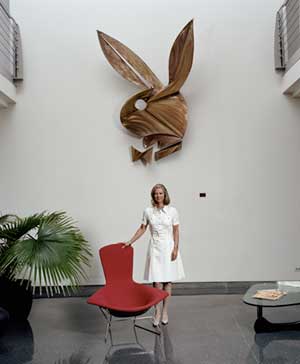 She is preparing to announce the 2007 winners of the Hugh M. Hefner First Amendment Awards but remains mum on dropping any specific names. Previous winners have included famed First-Amendment lawyers; the comedian Bill Maher; a high school student who successfully defended her right to form a gay/straight alliance at her Texas school; and the AP reporter who sued for the release of thousands of pages of Guantánamo Bay tribunal transcripts that revealed evidence of prisoner abuse.

Never afraid of being outspoken, Hefner, 54, explains that her politics developed while coming of age during Vietnam and Watergate. Though she ascended to the Playboy presidency at age 29, she was originally "very suspicious of all business. It was business that was prosecuting the war and dirtying the environment. Business was the establishment."

But Hefner now leverages her multimillion dollar business--built on naked ladies and bunny-emblazoned products--to take high-visibility positions on controversial issues, a tradition begun by her father decades ago. The company filed an amicus brief in Roe v. Wade, was the only corporate sponsor of Masters and Johnson's groundbreaking sexuality research, and has come out strongly in favor of gay marriage. Both the company and the Playboy Foundation provide large-scale support for civil liberties, sexual health, reproductive freedom, gay rights, and women's rights.

The magazine's content often intertwines with both the foundation (which has disbursed $20 million since 1965) and Christie Hefner's personal philanthropy. For instance, in 1983, Playboy became one of the first national magazines to write about AIDS--at a time when the syndrome was still being referred to as "gay-related immunodeficiency disease." Hefner has also helped raise $30 million to build the CORE Center in Chicago, the first outpatient facility in the Midwest for people living with AIDS.

Hefner dismisses what she describes as the "puritanical, antisexual, antimale" wing of feminism, but she nonetheless identifies herself as a feminist, declaring, "To say you're not a feminist is virtually the same thing as saying you're a racist." Still, it's hard to deny that the women in Playboy's pages have become increasingly airbrushed and silicone-enhanced over the years, as the magazine competes on a newsstand now crowded with lads' magazines. Is Playboy doing the average woman any favors? Hefner argues that Playboy women represent what she already sees at the gym, but given the power of the brand, it's hard to conceive of Playboy merely as a reflection of culture and not a cultural instigator in its own right.

Though Playboy may have slipped from its halcyon days of cultural relevancy, when contributors included Alex Haley and Truman Capote, it still has a U.S. circulation of 3 million. The magazine's stories, like a recent investigative piece on untreated post-traumatic stress disorder in Iraq veterans, can have a much broader impact than niche political publications.

A Chicago-dwelling supporter of Democratic presidential candidate Barack Obama, Hefner has a palpable passion for politics and, perhaps, slightly less passion for partying in the grotto at the Playboy Mansion. Jokingly contrasting herself with her famous father--who oversees the editorial content of Playboy while she manages the business side--she notes, "I don't want to live in a bathrobe."