LONDON, May 26 (Thomson Reuters Foundation) - A Filipina maid in Hong Kong has published stark photographs of burned and beaten domestic workers to highlight the "modern slavery" she says has long been the city's shameful secret.

"Hong Kong is a very modern, successful city but people treat their helpers like slaves," said Xyza Cruz Bacani, whose black and white portraits won her a scholarship from the Magnum Foundation to start studying at New York University this month.

"The abuse happens behind doors. It's common but no one talks about it, so I want to tell their stories, I want to tell people it's not OK to treat your domestic workers that way."

Bacani is one of the 330,000 domestic workers in the former British colony, most of them from the Philippines and Indonesia.

She told how maids are frequently forced to sleep on toilets, kitchen floors, cabinet tops or even baby-changing tables because they are not given beds.

Many work up to 19-hour days. Some are underpaid or not paid at all. Others are denied food or beaten, she said.

"It was a big shock to me when I listened to their stories and they told me they slept on toilets, that their boss slapped them or their boss didn't even feed them," Bacani, a self-taught photographer, told the Thomson Reuters Foundation by telephone.

"It shocked me how people could treat other people like that. It's very barbaric. When I talk about it I feel angry." 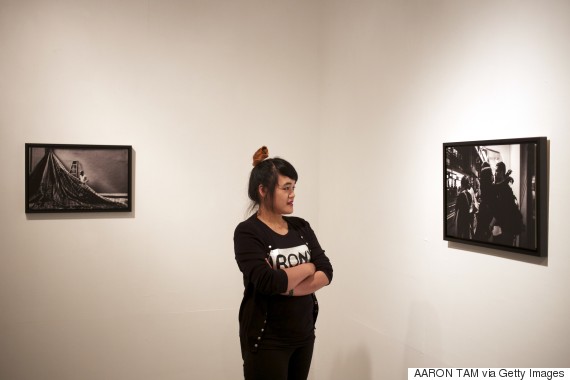 In a picture taken on March 21, 2015, Filipino photographer Xyza Cruz Bacani poses for a photograph in Macau. (Aaron Tam/AFP/Getty Images)

Bacani, who comes from a village in Nueva Vizcaya, moved to Hong Kong when she was 19, giving up her nursing studies so she could help pay for her younger brother and sister's schooling.

For the last decade she has worked alongside her mother for an Australian-Chinese businesswoman in the affluent Mid-Levels neighborhood on Hong Kong island.

She rises at 5:30 most mornings, serves breakfast, cleans the apartment and looks after her boss's six grandchildren, who visit almost daily.

But whether she is shopping in the market or taking the children to the park, she always has her camera in her bag.

Last year Bacani volunteered at Bethune House, a shelter for abused domestic helpers, and was horrified by what she saw.

"Many work until 1 a.m. and start again at 5. They work every day without stopping. I have friends who are underpaid and others have been physically hurt," she said.

"It's modern slavery. It's 2015 and people should be more educated, but still it happens."

Bacani's most shocking photos are of a Filipina woman called Shirley who suffered extensive third degree burns when a pot of boiling soup fell on her after someone left it on a rack.

Her boss said it was an accident, but Bacani says he refused Shirley medical leave and fired her after she fainted.

The maid started legal proceedings but appeared to be getting nowhere. Bacani says things changed when the CNN website reproduced her photos of Shirley's burns.

"After we published some of the images her boss paid her compensation for her injuries, her dismissal and three years of salary because she cannot work," Bacani said.

Shirley's story is not uncommon. The abuse suffered by the city's domestic workers made headlines this year when a Hong Kong woman was jailed for six years for attacking and abusing her Indonesian maids and threatening to kill their relatives.

The case sparked calls for Hong Kong's government to revise its policies on migrant workers.

Campaigners say domestic workers are often reluctant to report abuse for fear of being deported, trapping them in a cycle of exploitation.

But Bacani says many maids are paid less, especially Indonesians who are often treated worse than Filipinas, partly because of the language barrier.

She describes herself as "one of the few lucky ones." She says her boss is a "great lady" who encouraged her to apply for the Magnum program, which aims to help photographers tell stories that can advance human rights in their home countries.

Bacani plans to return to Hong Kong later this year to mount an exhibition of her images of domestic workers.

"Awareness brings change," she says. "I hope my work can change people's perspective on domestic workers and help end this modern slavery." (Reporting by Emma Batha, Editing by Katie Nguyen)