Entering Yael Bartana's latest exhibition at Petzel Gallery in New York, entitled, "And Europe Will Be Stunned," it's hard to tell whether you're entering an art exhibition, a political headquarters or a historical monument of an alternate, ruptured history. Stacks of massive red posters in a corner read "A MANIFESTO" in capital letters above an insignia conflating the Star of David and the Polish eagle. The posters read, in part:

"We want to return! Not to Uganda or Madagascar, not even to Palestine. It is Poland that we long for, the land of our fathers and forefathers..."

"And Europe Will Be Stunned" is a recent film trilogy chronicling the activities of the Jewish Renaissance Movement in Poland (JRMiP), a political group founded by the Israeli artist that calls for the return of 3,300,000 Jews to the eastern European nation.

Bartana centers this triptych around a singular question: What if the streets of Poland were full of Jews again? Yet this one question summons and weaves a series of movements, beliefs and potential future visions. Issues of Zionism, multiculturalism, homeland, the right of return, anti-semitism and identity are raised and left to linger on disturbingly ambiguous terms. In an interview with Art in America, Bartana says, "Conceptually, the return, to go back to the primal scene, this is a kind of collective therapy."

In the exhibition, she toys with the aesthetics of power, using bleeding reds and potent symbols to acknowledge totalitarianism and power via striking visuals. The effective employment of uniforms, flags and massive crowds in the films turn individuals into geometric patterns, and leaders into near-deities.

The first film, entitled "Mary Koszmary (Nightmares)," features a young political leader delivering a speech, part poetry and part propaganda, calling for the Jews' return to Poland. Speaking to an abandoned Warsaw stadium the charismatic leader appears between dream and reality, past and future.

In the following film, Wall and Tower, actors donning 1930s garb begin building a settlement on the site of the Warsaw Ghetto. Fences and barbed wire complicate the utopian vision of a new homeland for Jews, again muddling our sense of time.

Finally "Assassination" depicts a procession for the young political leader after he has been killed by an unknown opponent. At the funeral various figures, some acting and some playing themselves, provide possible next courses of action following the leader's death. Some demand Jews continue on their quest for the Polish homeland, while others plead that Israel is the only place with a safe future for the chosen people.

In three 20-minute films, Bartana not only creates a frustrating and deeply moving artwork, she creates a space for a new political idea, albeit one that seems farfetched. Through this utopian vision, Bartana uses art as a means to trigger imagination, action and real political effects that reverberate beyond the rigid white walls of the gallery.

Yael Bartana's "And Europe Will Be Stunned" shows until May 4 at Petzel Gallery in New York. 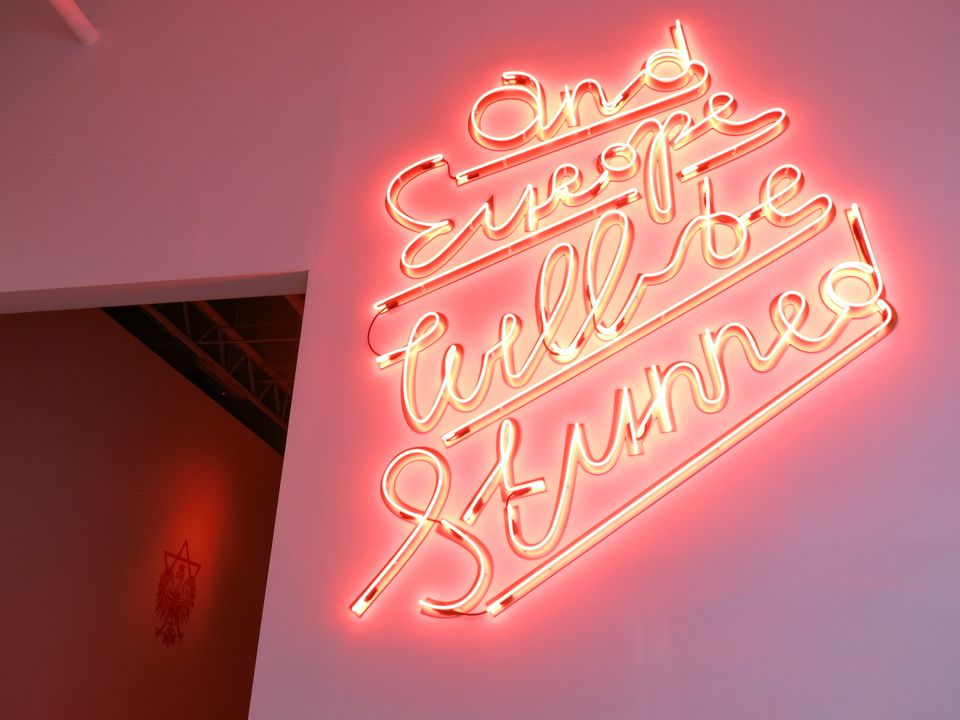 1 / 8
Courtesy of the artist and Petzel, New York.