First of all, there are only two names that matter right now. One you know, and one you should.

The first is Tim Armstrong, the former Google sales leader who spent the past seven years turning AOL from a moribund web portal into a rapidly growing and acquisitive ad tech and web content driver. Under Armstrong, AOL bought Huffington Post and a number of ad tech companies, and his focus and drive continues. There were rumors back in 2014 that Armstrong wanted to buy or merge with Yahoo - but those overtures were rebuffed by Marissa Mayer. 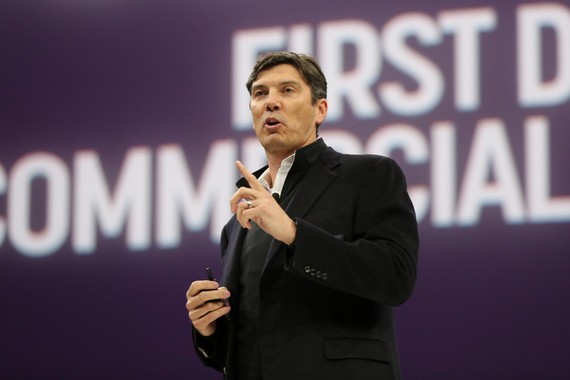 It's worth remembering that Verizon is a very different organization than AOL/Huffpost. Verizon is a public company with a market cap of 206.85 billion and a headcount of 177,900 employees. AOL, on the other hand, was a small, agile and fast-moving tech company with just 5,600 employees and a market cap of $3.92 billion when it was sold. So there's no doubt that the melding of these two cultures won't happen overnight. But one thing is clear, Verizon CEO Lowell McAdam and Tim Armstrong have a shared vision - and a strong working relationship.

McAdam has said that there is a three-tier strategy to Verizon: Connectivity, Content and Traffic.

Jim Cramer of CNBC's Mad Money asked McAdam if Yahoo would support the three-tier strategy; McAdam said: "At the right price I think marrying up some of their (Yahoo's) assets with AOL under Tim Armstrong's leadership would be a good thing for investors. Armstrong has set aggressive largest for growth - from its current 700 million users to two billion in just four years. Armstrong's AOL will be the top global media company with revenues between $10 billion and $20 billion by 2020."

"Verizon is looking to the future," Brett Sappington, director of research of consulting firm Parks Associates told the LA Times. "It's about being able to create an audience, and increasingly that audience is going to mobile and moving away from traditional forms of media."

Does this mean Verizon wants to attract an audience of millennials and teens who prefer watching videos on their mobile devices than on television? In a word, yes. And Yahoo's 1 billion users would be an enormous addition to AOL's 2 million and Verizon's 105 million wireless subs.

So, the good news is Tim's plan to own what are essentially the last two 'portals' seems likely to come true. The question is, at what price?

When you look under the hood, there's a good news and a bad news piece to the Yahoo assets.

A Re/code reports that Yahoo expects a 15 percent fall in revenue for 2016, shrinking earnings by more than 20 percent - so that's bad.

But it turns out the silver lining might be Yahoo's treasure trove of technology patents. There could be as much as $4 billion in value in that IP according to the NY Post. Yahoo holds 6,000 patents including early IP in mobile messaging, data mining, behavioral ad targeting, and more.

One executive who knows the value of patents is Tim Armstrong. Armstrong sold AOL patents to Microsoft for $1.1 billion In April 2012.

Whether or not Verizon closes a deal with Yahoo - their focus and direction are clear. And last weeks small, but telling investment in AwesomenessTV may be a clue.

The company will partner with AwesomenessTV to create a "first-of-its-kind premium short-form mobile video service.'' Packaged with Verizon's Go90 product, this content will be exclusive to Verizon users. As reported by Barrons: "$160 million is small change for a company like Verizon, we believe this deal gives another clue where Verizon is going."