Sometimes the journey is better than the destination.

While GPS units typically map the shortest path between two locations, researchers at Yahoo have developed a way to find the most "beautiful" route. Their new mapping algorithm determines the prettiest locations within a given area and plots the most pleasant course to a pedestrian's destination.

How did researchers determine which locations were the most enjoyable? They asked around.

Daniele Quercia of Yahoo Labs in Barcelona worked with a team to develop the method for gauging an urban environment’s most beautiful locations. Starting in London, the researchers aggregated Google Street View and Geograph images of the city. They took these photos and, using a crowdsourcing website called Urbangems, asked people which locations they thought were "beautiful," "quiet" or "happy."

Once they factored these opinions into the algorithm, a sampling of 30 people tested the new GPS routing methods and determined that the more enjoyable routes were only 12 percent longer than the shortest routes. This means that taking a more scenic walk through the city won't necessarily add a ton of time to your trip.

In addition to crowdsourcing, researchers looked at 3.7 million Flickr photos of locations around London to gauge the relative beauty of certain areas. Judging by the 30 participants' reactions to these photos, the researchers surmised that Flickr geotags and likes could eventually eliminate the need for the tedious crowdsourcing process. 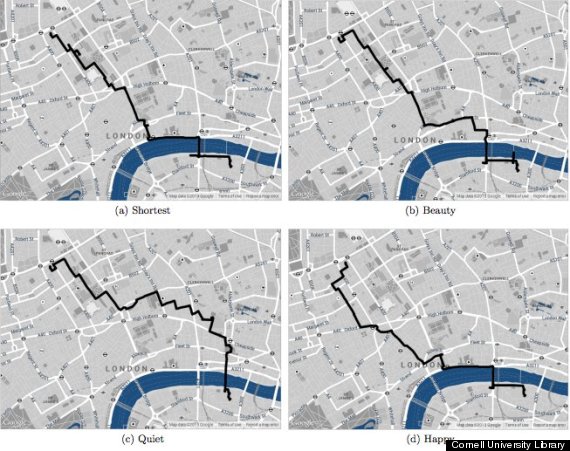 A map of different paths between point A and point B in London, based on different "beauty" criteria.

Taking their research to Boston, they aggregated metadata from 1.3 million local Flickr photos. By measuring factors such as location popularity and likes, they were able to get an accurate enough gauge of the city's most beautiful spots, based on how many people have taken pictures there.

Then, 54 people in Boston were recruited to test this new data method, and the general consensus was that the algorithm had indeed found a beautiful route that could be used as an alternative to the shortest route.

The researchers hope to apply the Flickr model to even more cities.

"The use of Flickr metadata plays an important role for the generalization of our approach to different cities. The idea is to go beyond the crowdsourced data available for London," study co-author Rossano Schifanella told The Huffington Post. "In this way, we are able to apply our methodology to any city for which geo-tagged Flickr pictures are available."

Routes A and B (above) were created using beauty scores based on Flickr metadata.

MIT Technology Review points out potential problems with relying on people's opinions of the prettiest routes: "Some locations are less attractive at certain times of the day, for example during rush hour when traffic is heavier or at night when the character of some parts the city can change dramatically. The algorithm cannot account for these differences."

Schifanella says there is still more work to be done.

"The next step will be to implement a mobile application available on different platforms and let the users of different cities around the world play with it," he told HuffPost. "In this way, we will be able to collect feedback on the users' perception of the suggested routes that will allow us to adjust our algorithm accordingly."

The research paper was published July 3 by the Cornell University Library.