Yahoo is eyeing the one social network it can afford that would make it feel young again.

The company is considering buying Tumblr, according to two separate reports on AllThingsD and Adweek. UPDATE: The deal was made official on Monday.

And so another social network that hasn't proven profitable might earning a 10-figure buy. It seems it's become an annual tradition. If you'll recall, Facebook scooped up Instagram in 2012 in a deal that at the time was worth $1 billion, although ultimately worked out to $736.5 million, after the company's stock dropped.

What gives? It's the need for the youngs. Tumblr may be Yahoo's best shot at gaining an audience of young people.

The aging tech company, which Marissa Mayer took over as CEO to much fanfare last year, is struggling to attract web users in their teens and 20s while it holds onto an older audience tethered to the company with 90s and early-aughts-era email accounts. Though Yahoo itself doesn't offer solid numbers, the app Hunch estimated in 2011 that 42 percent of Yahoo email users are between 35 and 64. Only 27 percent of Gmail users are in that age bracket.

Yahoo is missing the the sweet-spot demographic of 24- to 35-year-olds that advertisers climb over each other to get. And it certainly is missing teens, the young adults of the future that brands also spend lots of money to impress.

That's where Tumblr comes in. Yahoo has a small fortune of $3 billion in cash to spend, a remainder from its heyday in the 1990s. And surveying the landscape of websites teens use, the blogging network is the most popular one that Yahoo can afford. 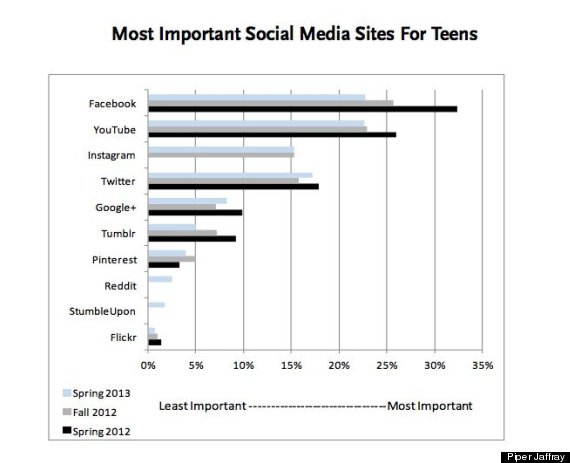 Above is a graph from the investment bank Piper Jaffray, which asked teens which social network is most important to them. Despite Facebook's supposed problem retaining teenage users, it ranked No. 1, with its subsidiary Instagram ranked third. YouTube and Google+ are both owned by Google, while Twitter, an independent company rumored to be valued at $10 billion, is out of Yahoo's price range.

That leaves Tumblr. If Instagram was a good purchase for Facebook at $1 billion (a big if), then Tumblr certainly is for Yahoo. At the time of acquisition in April 2012, Instagram had 30 million users. The site has not yet sold a single advertisement. In April 2013, Tumblr had 113 million members and plans to be profitable for the first time this year.

Correction: The original version of this article stated that a report of Tumblr's possible sale to Yahoo was from AdAge. It was actually from Adweek.

The 8 Most Positive Blogs On Tumblr