For most of her life, Yajaira Saavedra thought that her hazy memory of crawling through a hole in a chain linked fence in the Texas desert was merely a childhood nightmare. But a few years ago, Saavedra, now 23, found out that she entered the United States illegally with her parents and little brother when she was just four years old.

Now, she says, the real life nightmare may keep her from her dreams.

Although Yajaira graduated from CUNY with a degree in marketing last year, unlike most of her classmates, she won't be able to obtain most paying jobs in the field due to her undocumented status.

So Saavedra has taken her marketing skills to the streets to promote a cause close to home. She founded the DREAM Scholars, a Manhattan-based advocacy group devoted to promoting "equity in education regardless of immigration status" through the passage of the national DREAM Act, a bill which would allow some young undocumented immigrants to gain legal status.

"My immigration status has also been a huge hurdle in my education career," Yajaira said in an interview with The Huffington Post. "Even though congress has failed us by not passing the national Dream Act, the undocumented youth did not give up. We are united more than ever."

The Immigration Policy Center estimates that there are nearly 2.1 million undocumented children and young adults in the United States like Yajaira who would be eligible for legal status under the Dream Act.

Yajaira's group is also working to pass the DREAM fund and New York State Dream Act, bills which would grant undocumented students the opportunity to apply for private and public tuition assistance.

DREAM Scholars, which Yajaira estimates has more than 20 members, recently protested at a Romney fundraiser at the Sheraton New York Hotel and Towers in Manhattan. The candidate has promised that he'd veto the legislation if elected president, despite it's widespread support in the Latino community. The group holds that while its members cannot vote because of their undocumented status, they can still be heard via protest.

Yajaira was dressed as the Statue of Liberty. She says the monument is her first real memory of the United States, and the first place her father brought her when they arrived.

For Yajaira, the statue also represents America's greatest promise as well as one of America's greatest lies. Even though it has been denied to her, she believes deeply in the promise of the American dream, and the inscription on Lady Liberty's base that reads,

"Give me your tired, your poor
Your huddled masses yearning to breathe free
The wretched refuse of your teeming shore.
Send these, the homeless, tempest-tost to me,
I lift my lamp beside the golden door!"

Her family came because they had no other choice, Yajaira says. As fruit farmers, Yajaira says her relatives couldn't compete with foreign produce prices and lived in "terrible conditions", she said. 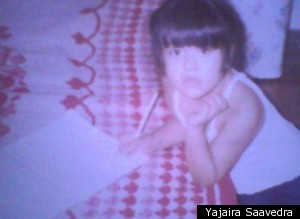 Yajaira Saavedra as a young girl.

"There were many days in which I would satisfy my hunger by eating dirt – just as long as my brother had something to eat," Yajaira wrote in a blog about her experiences.

Yajaira says she takes after her mom. She considers herself "very hard working" and she loves school. She's been a lifeguard for five years at a local pool and her mother has cleaned houses in New York City for nearly twenty years.

Although the Saavedras would like to become legal residents, returning to Mexico and "getting in line," as many suggest, doesn't seem like an option as they would likely face a three- or 10-year ban to reenter the country. Nonetheless, they see the United States as their home.

Now that Yajaira's out of school, her mother, who is trilingual (in Spanish, English, and an indigenous dialect) has started taking college courses, too -- to improve her written English.

"She reads to me in English every night now. Just to practice," Yajaira said.