Like good ideas, the Yale AIDS Memorial Project started as a simple one to change the world. In a brainstorming session held toward that purpose at magazine N+1’s office, YAMP founder Christopher Glazek contributed his idea to better memorialize victims of foggy, institutionalized past. Each editor spoke of a project to change one aspect of society. Starting in the Yale community, people would tell stories to bring life and awareness to victims, so a better memory could affect the future.

Project Director Richard Espinosa, a designer and Yale graduate ‘10, says the journal’s merits are many. Institutional memory requires ongoing transmission of shared facts and experiences, but Yale, like many institutions early-on, practiced a complicated approach to the crisis.

Glazek's history of AIDS at Yale featured student activists and professors in positions that held the front lines of progress against the disease, but his descriptions of administrative action characterized Yale as slow or appeasing to mounting pressure from these men and others.

Given its place in the political, medical and social environment within the crisis, however, Yale Professor and historian George Chauncey noted in his introduction that he was shocked to discover how little the students in his Gay and Lesbian History class knew about AIDS. Many were born after the crisis, knew it as an African disease, and while some had family members who died of the disease, families often obscured the events. In one generation, hardly a student knew the disease that withered and killed so many gay men.

The journal and the eight men featured within are considered a great start to their education.

Brief factoids introduce each man with date of birth, hometown and year of death before the "yearbookish" facts. Colleges are remembered -- majors and on to extracurriculars too. The effect strengthens their connection to young readers as predecessors. It also introduces context for the different times and conditions each lived through as well as those taken from them -- often just years after graduation.

Story continues after the slideshow. All text and photos are courtesy of YAMP. Choose to view fullscreen for a better reading experience.

They remind Chauncey that Yalies were never immune, and he writes a line that places Yale appropriately within the crisis’ scope. Focusing on Yale's place within the crisis could certainly be considered self-serving to a community that needs little more than it has. Still, Chauncey wonders if the enormity of the crisis can only be understood chapter by chapter, institution by institution -- precisely how the journal was designed to catch on.

Yale, like most universities, is made up of great and small parts named for prominent alumni. The beauty of the journal, according to Espinosa, is its mission to spread to other schools and honor victims with written memorials. After all, an alumni-funded journal published at one of the world’s richest and most powerful institutions wouldn’t be hard to work out. Harder is to scrub out any mention of Yale when registering the nonprofit (AMP, Inc.) and packaging your concept as necessary in others’ schools.

Glazek, a recent Yale graduate (’07), told the Huffington Post’s Michelangelo Signorile, “We’re hoping to lay the foundation and get up the infrastructure, and we want to make our digital platform available to other schools and others institutions, churches, theater companies, whatever.”

Espinosa told HuffPost College that YAMP will be proof-of-concept for other “_AMPs.”

“This is all on the level of technology and infrastructure, but additionally we hope to inspire other places to think in terms of this recent and ongoing history, to not whitewash the death of a people and to insist their deaths have no reason to be shrouded in stigma or shame,” he said. 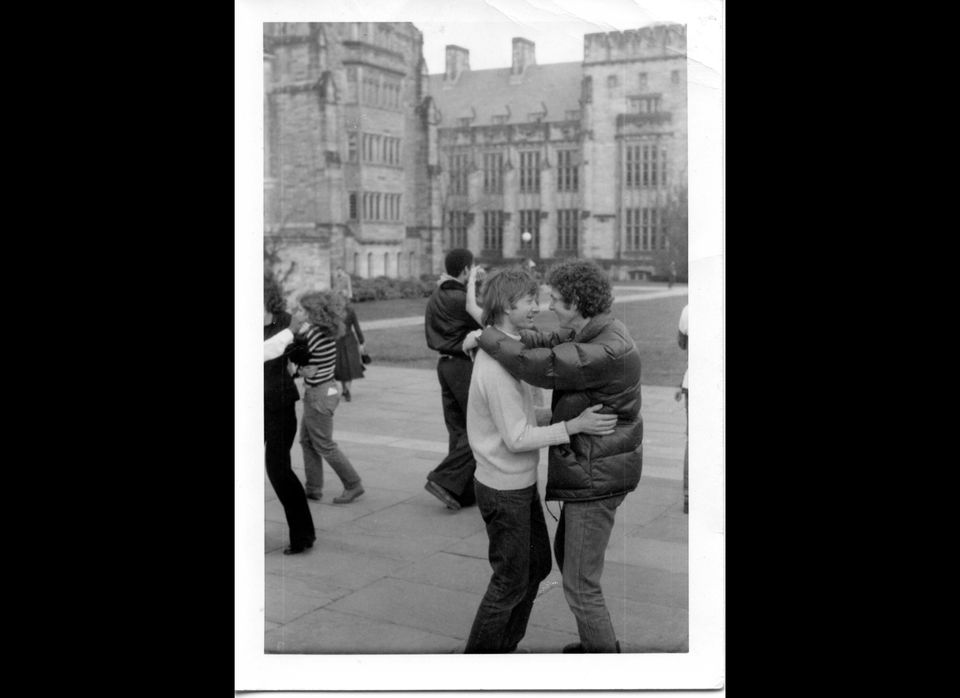 1 / 11
Jack Winkler
Winkler and Mark Singer dancing at the first Gay Rights Week at Yale, 1977. Winkler was a classical scholar, queer theorist and political activist who taught at Yale and Stanford. He published prolifically until his death at age 46. Diagnosed with AIDS in August, 1987, Winkler announced a two-year sabbatical during which he wrote at an intensified pace and published his most influential work, <em>Constraints of Desire: The Anthropology of Sex and Gender in Ancient Greece.</em> He died in Palo Alto on April 25, 1990.
YAMP