I've spent a great deal of time over the past year observing (and playing backseat driver to) the Greek Crisis. So when Greece's polarizing former finance minister Yanis Varoufakis released his latest book, And The Weak Suffer What They Must, I knew I had to read it. While the book was severly lacking in economic theory and flirted too closely with conspiracy theories over historical analysis it leveled legitimate criticisms about the structure of the European Union and the opacity with which decisions that affect millions of people are made.

The temptation with Varoufakis is to embrace him as a messiah or denounce him as a charlatan and this book will reinforce most people's predisposed notions about him. In fact, I got the sentiment, reading this book, that he relishes the visceral binary reaction he evokes in others, setting you, the reader, up for a frustrating struggle as you try to get through it. 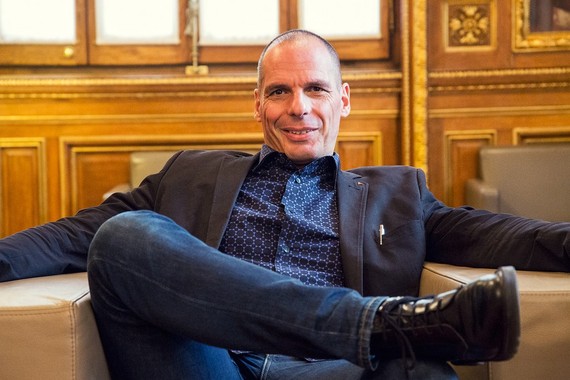 One gets the impression from reading the book that central bank policy is the outcome of petty squabbles between politicians and central bankers rather than a dispassionate reaction to market/economic fundamentals. While it might be naive to assume that personalities don't play a role in how policy is decided, it is stranger still to see an economist assign such a marginal role to things like "inflation" and "unemployment" when it comes to deciding where to set interest rates. In his reading of history Volcker's interest rate hikes weren't to break inflation's back but to stick it to Europeans and the Japanese for building up trade surpluses with the US. The various moves of Germany's Bundesbank over the years are also explained away as bouts of Francophobia/philia depending on the political mood du jour.

The book also exposes just how unfit Varoufakis was for the delicate role Greek PM Alexis Tsipras entrusted to him: to negotiate an exit from the bailout death trap that Greek and European politicians had imposed on the country. One can't tell if it is an incredible lack of self-awareness or twisted malice that drives Varoufakis to constantly compare his German counterparts to Nazis and then be shocked that they don't take kindly to the comparison. His allusion to their totalitarian ways is particularly hollow when you consider that Varoufakis' government was, during his entire tenure, supported by the Neo-Fascist Independent Greeks party while he faced down Schauble's Germany.

But you shouldn't throw out the book entirely. Many of Varoufakis' arguments against the EU's decision making processes, its slavish dedication to the failed dogma of austerity and the seeming disdain the Brussels-Frankfurt elite have towards the democratic process are valid. Eight years into the crisis and Europe remains firmly wedded to economic austerity that is so discredited even the IMF has sought to distance itself from it. Elections in many European countries that have challenged this dogma have only caused its powerful proponents to cling to it even more vigorously. Behavior that Varoufakis rightfully criticizes.

His criticisms are particularly pertinent when you consider that the Greek Crisis is about to rear its ugly head once more this summer, and Europe's politicians can't exactly blame Varoufakis' abrasive style for their failure to definitively end the crisis. With millions of European citizens from Athens to Helsinki suffering from rising poverty, stagnating wages and political dysfunction a change of course can't come soon enough.

Sign up for Daily Pnut, an email on world affairs that will brighten your mornings and make you sound marginally more intelligent.