By Lefteris Papadimas and John O'Donnell

ATHENS/FRANKFURT, July 6 (Reuters) - Greece's outspoken finance minister resigned on Monday, removing one major obstacle to any deal to keep Athens in the euro zone after Greeks voted resoundingly to back the government in rejecting the austerity terms of a bailout.

Leftist Prime Minister Alexis Tsipras promised German Chancellor Angela Merkel that Greece would bring a proposal for a cash-for-reforms deal to an emergency summit of euro zone leaders on Tuesday, a Greek official said. It was unclear how much it would differ from other proposals rejected in the past.

Gloomy officials in Brussels and Berlin said a Greek exit from the currency area now looked ever more likely.

But they also said talks to avert it would be easier without Yanis Varoufakis, an avowed "erratic Marxist" economist who infuriated his fellow euro zone finance ministers with an informal style and hectoring lectures. He had campaigned for Sunday's 'No' vote, accusing Greece' creditors of "terrorism."

"I was made aware of a certain 'preference' by some Eurogroup participants, and assorted 'partners', for my... 'absence' from its meetings; an idea that the Prime Minister judged to be potentially helpful to him in reaching an agreement," Varoufakis said in a statement.

His sacrifice suggested Tsipras is determined to try to reach a last-ditch compromise with European leaders.

Greece's political leaders, more accustomed to screaming abuse at each other in parliament, spent the day locked in talks at the president's office trying to produce an unprecedented national unity statement.

Austrian Finance Minister Hans Joerg Schelling said publicly what other euro zone figures had said in private: "Varoufakis was someone who massively destroyed trust through his name-calling and by repeatedly criticizing the institutions ... that's why I hope that the basis for talks will now be better."

To win any new deal, Greece will have to overcome the distrust of partners, above all Germany, Greece's biggest creditor and the EU's biggest economy, where public opinion has hardened in favor of cutting Greece loose from the euro. 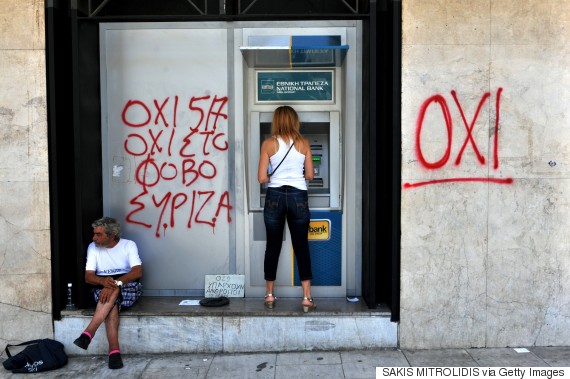 While jubilant Greeks celebrated their national gesture of defiance late into the night, there was gloom in Brussels.

European Commission Vice-President Valdis Dombrovskis told a news conference there was no easy way out of the crisis and the referendum result had widened the gap between Greece and other euro zone countries.

Tsipras has also spoken by telephone to French President Francois Hollande, who is trying to broker an agreement ahead of Tuesday's Brussels summit. Hollande was due to meet later on Monday with Merkel in Paris to seek a joint response from the euro zone's two leading powers.

But an EU source said barring some major Greek concession, euro zone leaders were more likely to discuss a Greek exit, and how to reinforce the remaining currency union, than any new aid program for Athens on Tuesday.

While France and Italy have emphasized the importance of more talks, German public opinion is running out of patience.

Merkel's vice-chancellor, Social Democrat Sigmar Gabriel, told a news conference: "If Greece wants to stay in the euro, the Greek government must quickly make a substantive offer that goes beyond its willingness thus far."

On Sunday he said Tsipras had torn down the last bridge for a compromise.

A German Finance Ministry spokesman brushed aside Greek demands for a big debt write-down, which the International Monetary Fund said last week may be necessary. He said the IMF was promoting its traditional stance but Europe had opted for solutions other than debt cuts to put countries back on track.

Bankers said the Greek government would issue a new decree on Monday extending for at least a few more days an eight-day-old bank closure that has crippled the economy. There were long lines at cash machines, where Greeks are rationed to withdrawing 60 euros a day, and 20-euro banknotes have started to run out.

Greece's immediate fate is in the hands of the European Central Bank, which has kept Greek banks open with a trickle of emergency cash. The ECB's policymaking governing council delayed until late afternoon a conference call to decide how long to go on keeping Greek banks afloat.

Several people familiar with ECB policy said it would probably reject a Greek request to raise a cap on emergency liquidity assistance and leave the limit unchanged, slowly tightening the noose but giving banks a few more days' air. 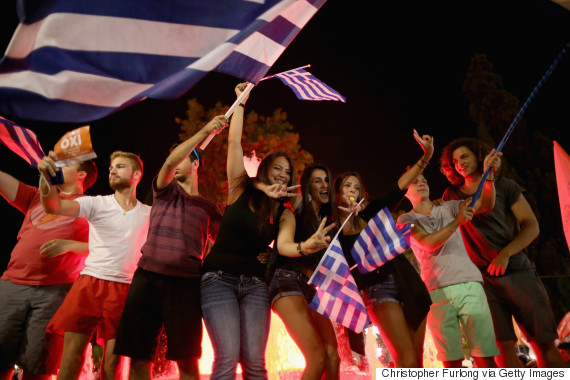 After five years of economic crisis and mass unemployment, Greek electors voted 61.3 percent 'No' to the bailout conditions already rejected by their radical leftist government, casting Greece into the unknown.

"You made a very brave choice," Tsipras said in a televised address as jubilant supporters thronged Athens' central Syntagma Square to celebrate the act of defiance of Europe's political and financial establishment.

"The mandate you gave me is not the mandate of a rupture with Europe, but a mandate to strengthen our negotiating position to seek a viable solution."

The euro tumbled against the dollar on Asian markets after the setback for Europe's monetary union, and European shares and bonds took a hit when markets opened after the weekend. But the losses were contained and there was no sign of serious contagion to other weaker euro zone sovereigns.

Analysts with several international banks including Citi, Barclays, BNP Paribas and J.P. Morgan said a "Grexit" from the euro zone was now their most likely scenario.

EU officials said it would be hard to give Greece easier terms, not least because its economy has plunged back into recession since Tsipras' Syriza party won power in January. Public finances were now in a far worse position than when the rejected bailout deal was put together.

But on the streets of Athens, citizens were unrepentant at their defiant vote.

"I voted 'No' to austerity; I want this torture to end," said 42-year-old Katerina Sarri, a mother of two manning a Kiosk in Athens.

"I'm aware that we will suffer for years but I'm still hopeful. I need to know that there is light at the end of tunnel, that the lives of my children will be better," she said. (Additional reporting by Renee Maltezou, Deepa Babington, Lefteris Karagiorgiannis and Angeliki Koutantou in Athens, Paul Carrel and Andreas Rinke in Berlin, Julien Ponthus in Paris; Writing by Paul Taylor; Editing by Peter Graff)