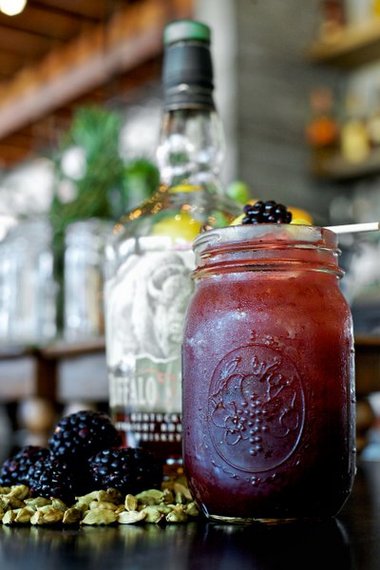 Yardbird, the new Southern restaurant at The Venetian in Las Vegas, is further proof that Southern food definitely remains on trend. The Sin City location is Yardbird's second. The first, located in Miami, has been a huge hit: it earned a pair of James Beard Award nominations -- for Best New Restaurant and Best New Chef -- and was one of Bon Appetit's "50 Best New Restaurants" in 2012. 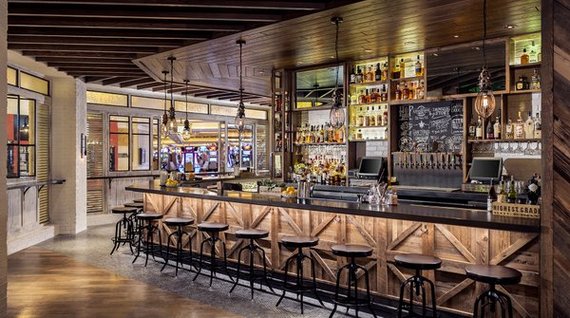 The bar at Yardbird, Las Vegas

It's an inviting, rustically glamorous space featuring reclaimed wood, light fixtures set with Edison light bulbs, and 75 black-and-white photos by John R. Hamilton of old-school celebrities, including the likes of Johnny Cash and Paul Newman. The expansive bar, which serves over 100 bourbons, has assembled an excellent cocktail program of such precision, it features five types of ice -- various spheres, blocks, and cubes -- all hand-cut on the premises. 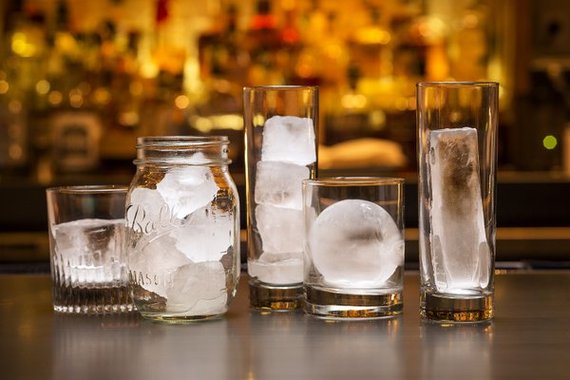 I tried Yardbird's elevated Southern cuisine over two visits during a recent trip to Vegas. On my first visit, I partook of cocktails and small plates. The creamy deviled eggs, simple and perfect, are served with double the yolks and topped with smoked trout roe, aka "redneck caviar," and fresh chives. The bright flavors of the warm farmer's cheese with watermelon were refreshing. The ideal comfort food came in the form of Mama's Chicken Biscuits. Yardbird perfected its fried-chicken recipe over 100-plus experiments, and the tender chicken -- free-range, incidentally -- is nestled on a buttermilk biscuit with pepper jelly and house pickles. Said biscuits were a perfect accompaniment to Yardbird's Southern-style cocktails. I tried two: the Blackberry Bourbon Lemonade, a restorative, slightly tart medley of Buffalo Trace, blackberry puree, fresh lemon, cardamom, and Angostura bitters, and the Old-Fashioned, which, according to legend, was first served during the 19th century at a gentleman's club in Louisville, Kentucky. The Old Fashioned here is composed of bacon-infused Buffalo Trace Bourbon, Angostura bitters, orange bitters, and maple syrup. It's well balanced and not too sweet. 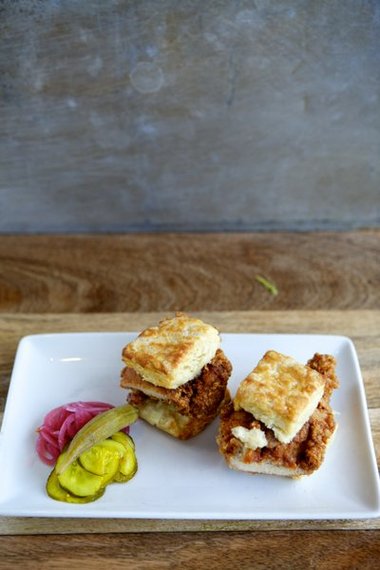 During my brunch visit, I savored the chocolate-chunk sour cream coffee cake with espresso walnut streusel. Served with blackberries, the cake isn't overly sweet, and is the perfect mix of soft on the inside and crunchy on the outside. The Fried Green Tomato BLT was top-notch. Breadless, other than the breading on the fried green tomato patty, it's topped with a slab of rich pork belly, tomato jam, house-made pimento cheese, and frisee. Another good brunch item is the Yardbird Benedict, their version of Eggs Benedict. Served in a cast-iron skillet, this rich indulgence features an organic, softly poached egg, house-cured bacon, hollandaise sauce and a buttermilk biscuit crumble, with a simple side salad of greens and cherry tomatoes. 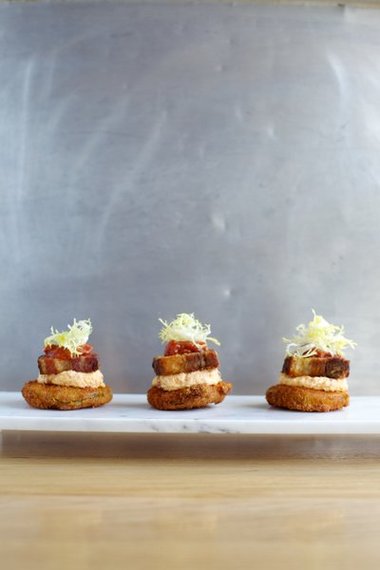 Though I was very satisfied with brunch, visions of pancakes were dancing in my head. I'm already dreaming of my next meal at Yardbird - I plan to try the '77 Elvis Pancakes: studded with chocolate chips, they're topped with banana compote, bourbon-maple syrup, and peanut butter.

All photos courtesy of Yardbird