WASHINGTON -- When the Obama administration began military action against the Islamic State back in August 2014, one of its stated goals was to defend Iraq's Yazidi religious minority from mass killings by the militant group. Almost a year later, hundreds of thousands of Yazidis have fled their historic homes in northwestern Iraq to escape what many argue is a genocide perpetrated by the Islamic State.

After successfully conquering the Yazidi areas of Iraq in August, the Islamic State, also known as ISIS, summarily executed hundreds of Yazidi men over the age of 14 and took hundreds of women as hostages. The United Nations suggested in March that the group's extremist behavior showed that it intended to carry out a religiously motivated genocide to wipe out the Yazidis.

The Huffington Post spoke with Bayan Sami Abdul Rahman, the Kurdistan region's representative in the U.S., about the actions of ISIS and the current status of the Yazidis.

"What happened to the Yazidis is nothing but genocide," Rahman said. "Anybody who denies that, I think, is just using political maneuvering, which is shameful and despicable in my book."

Rahman is a representative, not a formal ambassador, since the Kurdistan region is a part of Iraq and not an independent state. She took up her post in January, after serving as the region's representative to the U.K.

Though the Yazidis are usually distinguished by their religious identity -- their faith being a distinctive mix of ancient Assyrian, Zoroastrian, Christian and Islamic beliefs -- they are considered ethnically Kurdish. That binds them to the Muslim Kurds in Iraq, Turkey and Syria, who have been involved in defending the minority group against the Islamic State onslaught. As a result of the mass killings by ISIS, more than 400,000 Yazidis are now living as internally displaced persons in Iraq's northeastern Kurdistan region.

The U.N. report argued that the Islamic State's actions constituted a genocide because of their focus on the Yazidis' religious identity. ISIS killed male Yazidis even if they had agreed to convert -- in contrast to its treatment of other religious minorities, whom the group has instead forced to convert or to pay special taxes. Weeks after their massacres, the extremists again highlighted the Yazidis' identity in a chilling piece of propaganda saying that Islamic law required captured women who were non-believers to be treated as concubines and slaves. 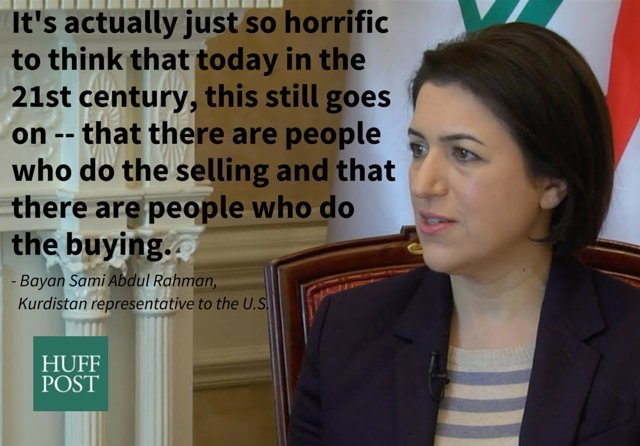 Accounts have since emerged of the women's treatment at sex slavery markets, their suffering in the homes of their new "owners" and their efforts to escape their plight -- from reaching out to relatives via hidden mobile phones to slashing their own wrists.

The regional government of Kurdistan, which Rahman represents, is working to recover those enslaved Yazidis. It revealed last month that it has paid Iraqi residents of Islamic State-controlled areas to "buy" Yazidi women and liberate them.

Rahman maintains that what the Yazidis went through should be considered a genocide. Her government has pushed for the U.N. and the U.S. Congress to pass resolutions declaring as much, even though she explained why it would be politically difficult to make that kind of statement.

Rahman underscored the importance of this recognition by referring to a prominent Yazidi political leader, the Iraqi parliamentarian Vian Dakhil, who said in Washington earlier this year that the Yazidis' suffering should be classified as a genocide.

"[Dakhil] said that in Yazidi oral history -- it's an oral tradition -- there have been 73 episodes of genocide. But there's no written record, there's nothing to say that this happened, other than what the Yazidis pass on to their children."

"This time, the world witnessed it," Rahman continued, "and for the Yazidis, it's important that not only they and their children recognize this as genocide but also the international community does so."