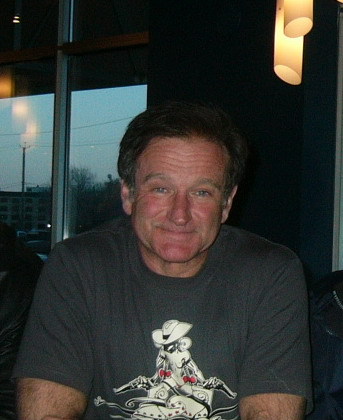 I have a friend who lives in L.A. and writes about celebrity. Mostly cynically. The day after Robin Williams died, in typical fashion, he posted to Facebook and his exactly 5,000 followers, that he didn't think Robin Williams was funny. The response was just what you would expect, and just what he was looking for: Some people yammered in agreement, others howled "too soon." I responded with, "who gives a fuck if you think Robin Williams was funny?" Then there was more yammering and howling about those who were and weren't outraged.

That totally misses the point. It misses every point.

In the immortal words of Denzel Washington in Philadelphia (and the countless other places it has been said), I'll explain it to you like you are a four-year-old. We feel pain when a celebrity dies, not because of their celebrity, but because we feel like we know them through their work. It's like a friend has died, or multiple friends. In the case of Robin Williams, some of our very best friends. And that, makes us think about ourselves. It's upsetting because it's personal.

So knowing that I can spar with the best of them, my Facebook friend retorted to my "who gives a fuck if you think Robin Williams was funny?" with "you certainly don't, but seriously, do you think he was funny?" I responded that the man tied a belt around his neck yesterday, and my grandfather killed himself the same way ... and the rest really is personal, but the point is, regardless of whether I find Robin Williams funny, I felt like I knew him through his work and I have personal experiences with suicide. In fact, I have personal experiences with depression, manic depression, attempted suicide and a variety of mental illnesses, because for one, it runs in my family, and for two, I studied clinical therapy and for three, I studied clinical therapy because I have personal experiences that made me interested in clinical therapy. So I also said, "I don't give a fuck whether either of us thinks Robin Williams was funny."

Feeling brokenhearted because a celebrity dies doesn't have a damn thing to do with their celebrity, it's entirely about us. It's why we cry at their movies, or books, or music or what have you. It evokes personal experiences that make us feel. And that's Okay. My Facebook friend, to my explanation of my grandfather, said "depression is one of the most difficult diseases to empathize with." For him. And lucky him for not having that personal connection. I empathize with it easily.

It's true that we have a tendency to milk tragedy in our present-day culture. I don't know if that is historically true, or true in other cultures, but I speculate that it's a pretty common human response. The "too soon?" joke is a point well taken. And, "comedy equals tragedy plus time," so they say. But really, sometimes it is too soon, because actual humans are having actual human experiences, even if you aren't.

So seriously, give us a day to grieve Robin Williams, because our grandfathers may have also hanged themselves with a belt. Give us a day to grieve whatever it is. There is no specific amount for the time part of the formula "comedy equals tragedy plus time," and maybe you need less time than someone else. That happens with humans. It starts wars. But those who haven't had enough time aren't getting outraged -- well, some might be -- but mostly they are grieving, for themselves.

I enjoy me some good cynicism as well, I'm from NY. But for me, yeah, it's too soon with Robin Williams.