I was asked in a recent AP interview (New York Times Saturday, Feb 20, 2010) what I would say to Tiger Woods, what the Buddha would say, and if I felt that he was sincere in his conviction to both recovery and Buddhism. On TV's EXTRA, I was asked to help their viewers understand Buddhism. To further clarify these questions, here's my letter to Tiger. However, it might well be a letter to which all suffering addicts can relate. Following that I analyze some of this week's blogosphere scuttlebutt on this topic.

I know from experience how difficult it is to be an addict, both in and out of recovery. The shame, guilt, and rage over this condition is totally overwhelming. Yet the proverbial bottom can be the perfect place to be, because as you've heard by now, the bottom must be hit. And we get to the bottom when we stop digging. Sounds like you've hit yours, but that depends exclusively on your perspective, willingness, and open mindedness. From what I've heard from you, you've got all three. As we say in the program, "You're in the right place."

Your example is very important to all of us, whether we're addicts, non-addicts, sports fans, Christians, Muslims, Jews, JUBUs or anything else. Through your success and your troubles you've shown the world something that spiritual teachings in general and Buddhism in particular have been saying for thousands of years: All of the worlds riches, sex partners, fame and mastery of one's field are not the source of true, lasting happiness. The Dharma (Buddha's words) teaches us that samsara (cycle of birth, suffering, death, and rebirth) is infinite. We can try a hundred trillion types of Band-Aids--physical, emotional, or mental--but all actions in samsara lead eventually to more suffering. Until we actually have had a pile of money or a stable of lovers we can continue to believe in the fantasy that more stuff will "fix" us. It never does.

For an addict, once we do Step One and admit we're powerless and our lives are unmanageable, we can see the implication of how our attachment leads us to our misery. It hurts like hell, but this is fortunately or unfortunately the prerequisite not only to recovery but to true, lasting spiritual happiness. What feels like the worst day of our lives is often the best possible thing ever. But to get that we need to move towards Step Two, coming to believe in a power greater than our addicted selves. That involves asking for help, which you've done, and developing faith or confidence in the process, the Higher Power, the 12-Step Community, our therapy and if we're inclined towards Buddhism, the plethora of teachings and practices given to us by the Buddha himself and hundreds of enlightened masters before and since.

This is the beginning. You can have it all or you can become another celebrity tragedy. That too is entirely up to you. Follow the advice of your recovery management team and ignore the ignorance of the general public. Many people are uninformed not only of the nature of addiction and recovery but the amazing quality of living possible by integrating a 12-Step recovery program and the unsurpassable teachings of the Buddha with modern psychology. But we know from the teachings that attachment, aversion and most of all ignorance are the root of the problem. The suffering that you're experiencing can be the impetus for spiritual realization that destroys these delusions--if, as we say in 12-Step, you work it.

If the Buddha were to speak to you he might say, "Bring me your suffering." If you show up in a 12-step meeting, we'll surely say, "Welcome home," and when you walk out the door, "Keep coming back. It works. It really does." Because like the Buddha, your recovering community has touched suffering deeply. As we say, "It takes what it takes--until it takes." We've been there, and have learned to live full, meaningful lives as recovering addicts of all types --from process addictions like sex, gambling and love addiction to the more widely known substance addictions.

If you are able to incorporate ongoing 12-Step support into a comprehensive, multi-faceted recovery program as I discuss in the 12-Step Buddhist, your example could have the potential to show millions of addicts all over the world--who would otherwise not try 12-Step recovery because of the Judeo-Christian leanings--that it's possible to be free and clean and sober in the modern world. You don't have to become a monk or renounce your riches to practice Dharma. There are many forms of Buddhism that lend themselves nicely to contemporary life. Nor do you have to permanently give up your life's work to be in recovery. My guess is that you'll be better than ever once you've got some "sobriety" under your belt.

Tibetan Buddhists recently celebrated Losar, the Tibetan New Year. For us, this is the Year of the Iron Tiger. Show us what being the Iron Tiger really means. You can do it! Besides your millions of fans, those of us who are 12-Step Buddhists are also behind you. Don't hesitate to ask for help.

For readers who haven't been studying the discussion by renowned experts and uninformed bloggers, here's a bit of a summary that will hopefully clear up some misconceptions.

What we know about sex addiction
It's a brain disease. In the 12-Step Buddhist Podcast, available on iTunes and at the12stepbuddhist.com, I interviewed neuropsychologist Dr. Sarah Ullman on sex addiction last year. Dr. Ullman says that sex addiction stems from neurological damage in the pre-frontal lobe. This damage can be the result of early childhood trauma such as sexual abuse, which can "change the brain's structure and chemistry deep within the cortex, at the cellular level. Neural plasticity was seemingly at once the answer to the question of how does an otherwise healthy but sexually abused child, without any physical injury or disease process, become a sexually addicted adult"?

Dr. Gabor Mate, in his bestselling book, In the Realm of Hungry Ghosts, describes how several systems of the brain are impaired during pregnancy or early childhood. These systems include stress management, impulse control, mood regulation development that, when impaired, can play a major role in the tendency to become an addict. Dr. Mate takes it a step further by stating, somewhat provocatively, that addiction is all nurture and no nature. I'll leave that argument to him, however. Suffice to say that while addicts engage in all sorts of immoral acts, most are traumatized at some point in life in ways that lead them to addiction. Dr. Drew Pinsky supports this notion as well.

Those in the public who are quick to make moral judgments on the character of addicts may be right to do so if they judge the act, not the actor. So far, that's not what we've been seeing. Our tendency is to oversimplify an issue which is anything but simple. Dr. Drew says that addiction is "a terribly complex psychiatric and psychological condition that might present with sexual acting out and features that we commonly lump together as simply "greedy and hedonistic," and that by definition it's "a behavior that an individual wishes to stop but can't." As one recovering sex addict tells me, "When a golfer admits he's an alcoholic, there's not much public recrimination." There's quite a bit more stigma attached, however, to sex addiction. But like any other addiction, it's easy to judge the addict instead of the behavior.

While generally self-centered in the extreme, most addicts aren't of the level of accomplishment of a Tiger Woods. Dr. Drew writes about this issue of narcissism in celebrities, "What we are talking about here are narcissistic traits. My research has demonstrated very clearly that celebrity and its trappings do not cause these defects so much as give them a fertile environment in which to flourish, unchecked by the usual constraints experienced by the rest of us." It makes sense that any addict with world fame and unlimited money would develop an addiction to sex. But if you add the personality mix necessary to become one of the world's greatest athletes, it seems impossible not to develop some kind of addiction as part of that set of traits.

Yet unlike individuals with narcissistic disorders, addicts with narcissistic traits can recover. Dr. Drew states, "Now addicts routinely present with this spectrum of, as the recovery community refers to them, defects of character. Yet when the addiction is thoroughly treated, the narcissism diminishes tremendously." (Dr. Drew, NYT. Feb 25th, 2010)

• "I do not believe for one nano second Tiger is a sex addict." (Comments from the New York Times Feb 25th)

• "There is no hope for Tiger in rehab, therapy, personal atonement, Buddhism, or anything else he might try if he has an addiction." (Paul Dean Pastor, Counselor, http://www.crosswalk.com/blogs/dean/11626625/)

Waste of time...
On the contrary, the issue of addiction is anything but a waste of time. Chances are that you have an addict in your family that will die from the disease, whatever form it may take. Addicts affect a minimum of 10 people in their lives. It's therefore very unlikely that you are unaffected by addiction. Many millions die each year. Perhaps the discussion in mainstream media will save a life. Who would be against that.

Don't believe...
Someone is an addict if they and their treatment providers have made that admission and diagnosis. To tell someone that you don't believe they're an addict makes about as much sense as telling your mother you don't believe she has breast cancer. My mother had a mastectomy, as did my sister. I wouldn't have considered telling them that they were wrong for either having the disease or seeking treatment. Note: having a disease isn't an excuse for bad behavior. But as I said above, the behavior is a separate issue from the quality of the individual.

No hope...
Last and best, it's amazing that fools can be called pastors and counselors and bloggers and even analysts and still say entirely, utterly stupid things. In fact, I'm literally dumbfounded by the lameness of this one. Sir, your comments make it hard for me to be compassionate. Thank you for the opportunity to deepen my practice. That said, if there was any truth to the good Pastor's statement, you'd be reading something else because I'd probably be dead. There is indeed hope for the "seemingly hopeless" condition of addiction. I'm living proof. 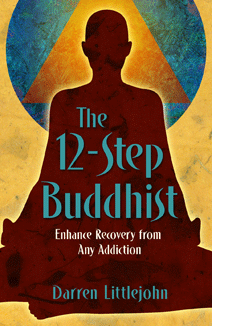 The 12-Step Buddhist: Enhance Recovery from Any Addiction

US Presidential Election 2020
Breaking news, analysis and the latest polls on the presidential race from HuffPost’s politics team
See More
More:
healthy livingBuddhismsex addictiontiger-woods-apologizes12-steps
Newsletter Sign Up
The essential guide to taking care of your mind and body
Subscribe to HuffPost’s wellness email
Successfully Subscribed!
Wellness delivered to your inbox