It seems that 2016 has been the Year of the Monkey in more ways than one. In both the United States and the United Kingdom the use of primates in research has been under increased scrutiny this year.

From the US Congressional mandate that the National Institutes of Health (NIH) review its use of nonhuman primates for research, to last week's publication of an open letter in the UK Independent signed by 21 experts including Sir David Attenborough and Dr. Jane Goodall raising concerns about the use of monkeys in brain experiments.

As one might expect all this attention seems to have put the primate research industry on the defensive.

Last week, the NIH essentially facilitated a circling of the wagons at what I hoped would be an open and critical discussion on the use of non-human primates in research as requested by Congress.

To take a step back for context, the 2016 spending bill passed by Congress last December included language authored by Representative Lucille Roybal-Allard (D-CA) that requested the NIH to 'conduct a review of its ethical policies and processes with respect to nonhuman primate research subjects, in consultation with outside experts, to ensure it has appropriate justification for animals research protocols and to provide and update on these efforts in the fiscal year 2017 budget request.'

In a follow up letter sent to the NIH in January by five members of Congress [Roybal-Allard, Sam Farr (D-CA) Dina Titus (D-NV), Eliot Engel (D-NY), and Brendan Boyle (D-PA)] it was reiterated that the review should be, "as independent as possible, so that the most difficult ethical questions with regards to the use of all non-human primates in a wide range of experiments can be honestly asked and answered." Unfortunately the workshop held by the NIH last week, largely failed to meet this stipulation.

As I monitored this workshop online, I was struck that the meeting seemed to be more of a cheerleading session for primate experiments and, at times, a macabre audition for researchers to make a case for their experiments to receive continued funding.

The few "outside experts" who were invited and not financially tied to primate research, were Dr. Tom Beauchamp, an ethicist at Georgetown University and Dr. Jeffrey Kahn a bioethicist at Johns Hopkins University but they were not invited to give presentations and had to vie for time in the discussion sessions where they were frequently shut down. This was especially shocking since Dr. Kahn had such relevant expertise, having chaired the 2011 review committee on the use of Chimpanzees in Biomedical and Behavioral Research, which led to the decision by the NIH to end support for invasive chimpanzee research.

The lack of balance was, I believe, no accident. When the workshop was first announced I contacted the workshop organizers to encourage a robust review and specifically suggested our own Dr. Jarrod Bailey who has published multiple peer-reviewed papers on the use of non-human primates in biomedical research and who participated in the aforementioned review of chimpanzees. Despite his impressive resume he, and many other possible candidates, were not invited to participate in the workshop.

A few weeks ahead of this workshop the NY Times published an opinion piece titled "Second Thoughts of an Animal Researcher" by Dr. John P. Gluck, an emeritus professor of psychology at the University of New Mexico, who seemed to suggest that the NIH workshop was poised to miss the mark from its inception; he wrote, "...the N.I.H will hold a workshop on, "continued responsible research" with these animals. This sounds like a positive development. But as someone who spent decades working almost daily with macaque monkeys in primate research laboratories, I know firsthand that "responsible" research is not enough. What we really need to examine is the very moral ground of animal research itself."

Across the pond, Dr. Gluck joined Dr. Jane Goodall, Sir David Attenborough and 18 other scientists, primatologists and animal welfare experts in signing an open letter, organized by Cruelty Free International, to bodies in the UK and EU responsible for funding and licensing controversial brain experiments on monkeys. Of particular concern is neuroscience research involving monkeys being subjected to invasive brain surgery, water deprivation and prolonged restraint. 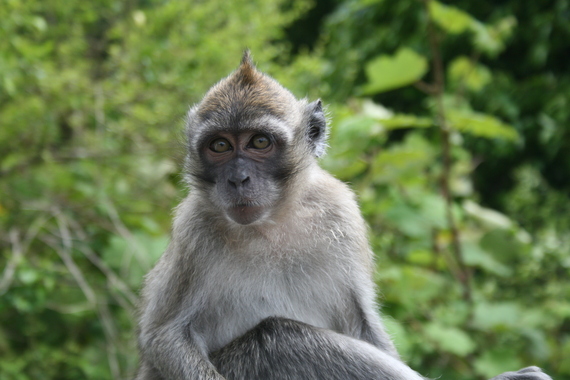 A recent review of the claims of the human relevance of data made by researchers, who use monkeys in these kinds of experiments, were found to be overstated and the availability and use of ethical studies involving humans were of more value to medical progress.

"The recognition that apes, certainly, and to an extent other primates, are so akin to ourselves, and can suffer so much, as we can, has transformed our attitude, or should have transformed our attitude, to using them for our own benefit. They are sentient beings that have mental lives comparable to ours, and sensitivities, and pain and deprivation mean things to them, just as they mean things to us."

"I and my team have studied chimpanzees, our closest living relatives, for over 50 years. I can state categorically that they have a similar capacity for suffering, both mental and physical, and show similar emotions to many of ours. We also study baboons and other monkeys and there is no doubt they too can suffer and experience fear, depression, anxiety, frustration and so on. To confine these primate relatives of ours to laboratory cages and subject them to experiments that are often distressing and painful is, in my opinion, morally wrong. To restrain their movement and deprive them of water is inhumane and extremely cruel and we have no right to exploit them in this way for any reason."

In response to the letter, a group of UK primate researchers have gone on the defensive, attacking the credibility of those scientists who disagree with them.

Last week's lopsided NIH workshop and the hostile response to the open letter seem to suggest that those directly involved with primate research aren't quite ready for an open, honest, discussion about the ethics of non-human primate research and the inevitable soul searching that will come with it. But whether they are ready or not, the conversation with the public and policy makers has begun.