Chinese welcomed the arrival of the Year of the Snake with raucous celebrations on Saturday, setting off a cacophony of firecrackers in the streets and sending fireworks blazing into the sky to bring good fortune.

Celebrations will carry on into the early hours of Sunday, officially the first day of the Lunar New Year.

Residents of Beijing braved freezing temperatures to let off brightly coloured fireworks, with clouds of smoke in the air, red wrappings from firecrackers covering streets and explosions rattling windows.

A plea by the government to set off fewer fireworks to help deal with Beijing's notorious air pollution seemed to fall on deaf ears.

"Every year we set off fireworks and this year will be no different," said Lao Guo, 45, a convenience store worker.

"People won't not set them off because of pollution. It's the custom."

Firecrackers are believed to scare off evil spirits and entice the god of wealth to people's doorsteps once New Year's Day arrives.

China's cosmopolitan business hub, Shanghai, saw similar scenes, though not everyone had reason for cheer.

"Business now is very weak. It's related to the financial crisis," said Chen Yongliang, who used to run a street stall. "The U.S. and other major countries have seen their economies slide and we've gone with them."

Maintaining a tradition of leaders visiting ordinary folk at this time of year, Communist Party chief Xi Jinping, who takes over as president in March from Hu Jintao, met subway construction workers in Beijing ahead of the week-long holiday.

"Migrant workers have been the labour force behind China's reform and opening up ... so we must look after you properly," Xi said in comments carried on state television.

"I hope the construction firm has organised some new year entertainment for you so you can have a happy holiday," added Xi, who has tried to cultivate an easy-going, man-of-the-people image since becoming party boss in November.

People born in the year of the snake, including Xi, are believed to be thoughtful and stylish yet complex characters.

Practitioners of the ancient art of feng shui say the year ahead will see financial markets slither higher as optimism grows, though the risk of disasters and territorial disputes in Asia also looms.

The lunar new year is marked by the largest annual mass migration on earth, as hundreds of millions of migrant workers pack trains, buses, aircraft and boats to spend the festival with their families.

For many Chinese people, this is their only holiday of the year.

Almost half of Beijing's population of 20 million have left the city for the holiday, according to state media.

Taboos abound over this period. Crying on New Year's Day means you will cry for the rest of the year, and washing your hair signifies washing away good luck.

Woe betide those who clean on new year's day, for you will be sweeping away good fortune in the year ahead. (Additional reporting by Sally Huang and Beijing newsroom, and John Ruwitch in SHANGHAI; Editing by Robert Birsel)

PHOTO GALLERY
Year of the Snake 2013
Download
Calling all HuffPost superfans!
Sign up for membership to become a founding member and help shape HuffPost's next chapter
Join HuffPost 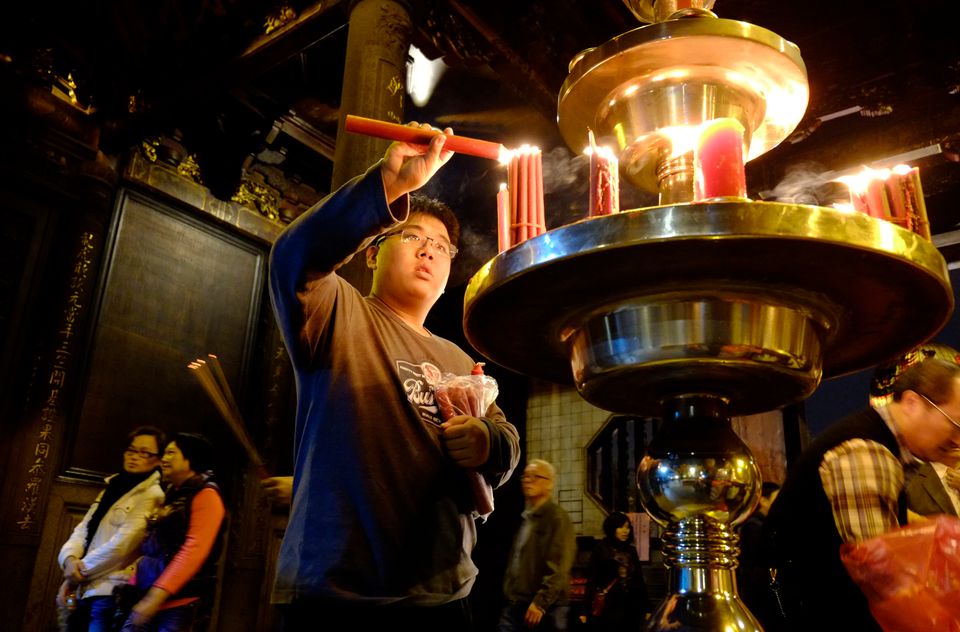 1 / 38
Year of the Snake 2013
Devotees light candles at the Lungshan Temple on the eve of the Chinese lunar new year in Taipei, Taiwan, Saturday, Feb. 9, 2013. The Lunar New Year falls on Feb. 10 this year, marking the Year of Snake in the Chinese calendar. (AP Photo/Wally Santana)
AP