There's this photo that's been circulating online which shows Asian men holding up a sign that reads, "YELLOW PERIL SUPPORTS BLACK POWER." The photo was taken in 1969 during a rally in Oakland supporting Huey Newton.

Huey Newton, a PhD in sociology, was an African-American political activist and revolutionary who co-founded the Black Panther Party in 1966. 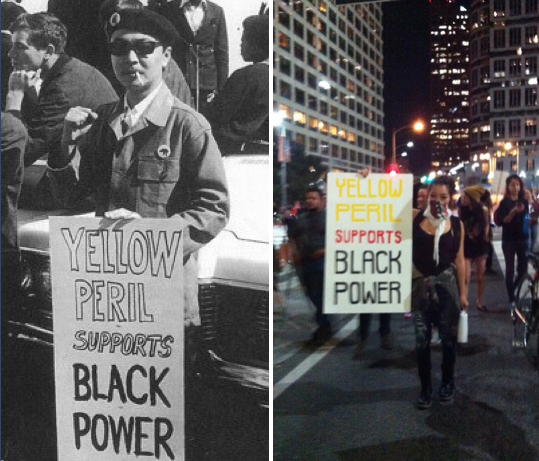 I didn't start seeing this phrase until the fallout of the shooting of Michael Brown last summer. And with each subsequent instance of police violence against black lives, this phrase would, without fail, pop up again, either in the form a status, a protest sign, or a shared link to another article. This slogan has a deep historical significance that clearly resonates with the Asian-American youth of today, and I'd like to explore why the phrase is especially salient now.

There are a few reasons I can think of as to why this phrase has been making its rounds around the blogosphere (never thought I'd be saying that unironically!):

But I think there's something more at work here. What does "yellow peril" have anything to do with "black power" at all?

There is a sentiment among minority groups that what affects one minority group affects every minority group. That, I think, is what lies in the spirit of this phrase. This sense of camaraderie and brotherhood Asian-Americans can give to black Americans stems from the recognition that Trayvon Martin could just as easily have been "Tranh Van Minh." Any Asian could easily have fallen under the historically ingrained system of othering George Zimmerman clearly used to make his decision. Asian-Americans recognize this type of "other"-based violence because we've experienced it our entire lives. It's just that this time, it wasn't a micro-aggression, but a very big macro- one -- an aggression that took an entire life. Trayvon had dark skin; I have small eyes. The fact will always remain the same: we are not white.

Going even further: the stereotypes of Asian-Americans and black American couldn't be more...err... pardon the expression, black and white. Asians are smart, quiet, apolitical, subservient, meek, etc., while blacks are uneducated, outspoken, gangbangers, troublemakers, and other toxic stereotypes. The idea that Asians are these role models is precisely why black culture and the black struggle jive so deeply with Asian-Americans. Black culture fills the hole that Asian stereotypes have ripped wide open. Asian-Americans have never had the chance to speak out against their oppression; instead, their struggle has always been rarely acknowledged, more implicit, and unspoken. The black American struggle, on the other hand, has been at the forefront of issues literally since before America's day 1.* These two groups, along with every other minority group in America, have always struggled against the same evil: the white majority's refusal to accept the reality of these two incredibly nuanced and diverse groups; however, the means of their struggle could not be more different. And so, by adopting the ways and means, and now the rhetoric, of the black American struggle, Asians have developed a voice they can use to speak out. Knowing this, it's not hard to understand why the yellow peril supports black power.

*It's telling when, at the time of this posting, the Huffington Post Blog has a Vertical tag for "Black Voices" but doesn't have a tag for "Asian voices."