Restaurant-goers curious about the cleanliness of the environments they're eating in and how safe the food is have had to rely on two different strategies: peeking in an establishment's window for the local health deparment's letter grade, or visiting the agency's website to search for it.

But now, community review site Yelp is being added to the mix as a new source of information on the health grades of various establishments.

The move is already being rolled out in San Francisco in coordination with the mayor's office, according to the San Francisco Chronical's SFGate blog. New York, Chicago and Philadelphia are following suit.

“We’re taking information already created with consumer tax dollars and making it highly visible,” Jeremy Stoppelman, chief executive of Yelp said on a phone call with journalists, according to the SFGate.

What's more, the news outlet reports that it's possible the letter grades could soon be added to other review sources, such as Google, TripAdvisor and CitySearch.

The New York Restaurant Association told the New York Post it was not in favor of such changes.

“Online information on health inspections is often out of date or has nothing to do with food safety,” Andrew Moesel, a spokesman for the association told the Post.

But for others, the news will be a welcome shift. Two City University of New York journalism students and their readers should be especially pleased. The students reported this past summer about an analysis of restaurant health grades compared to star-ratings on Yelp, and they found that many restaurants have a "C" grade (the lowest letter grade that the New York Health Department gives) but still maintain four or five stars on Yelp.

The Local, a New York Times-run neighborhood blog for Fort Greene-Clinton Hill in Brooklyn, cited some of the students' findings:

Take the Park Avenue Luncheonette near the Walt Whitman Houses. Yelp’s two reviewers give it five stars, even though in January, city inspectors found evidence of cross-contaminated food, mice, roaches and “filth flies.” The restaurant failed that inspection, and a subsequent one was no better.

Another top-ranked Yelp eatery, Hall Street Kosher, failed its last city inspection based on “evidence of rats or live rats in facility’s food and/or non-food areas.” But that didn’t stop the lone Yelp reviewer, who identified herself as a “gefelta [sic] lovin’ shiksa” from giving it five stars.

In the statement about the new partnership on its blog, Yelp pointed to a study of the Los Angeles restaurant industry, which found that hospitalizations from food-borne illness decrease as restaurants' hygiene scores increase. 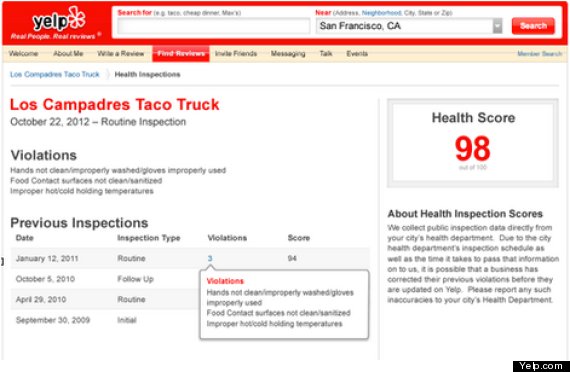