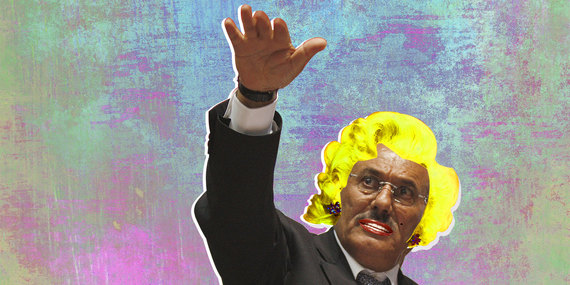 Visualization is an integral part of how we perceive the world, so visual images about Yemen do construct how Yemen is perceived. That's the case, as well, in how Yemenis perceive each other. Having said that, I tackle Yemen and Image Politics on two levels. One, how western media use images to portray Yemen? Second, how Yemenis use images to narrate stories about each other. Between the misleading political image and misogynic image, images from Yemen are confusing.

It is difficult to tell when exactly the relationship between the western media and the Old Sana'a's beautiful architecture began. That relationship was contagious that it was duplicated in the Arab media. No doubt that the Old Sana'a's dazzling architecture is difficult to ignore; but as I just mentioned, it's called the "Old" Sana'a; meaning that there is a new one. To box all Yemen, with all its cities and diversity, in a bunch of images from the Old Sana'a is not only doing injustice to the rest of Yemen's cities and their beauty, but it also gives a flawed impression that Yemen is just the Old Sana'a. And when western media wants to dig deeper into Yemenis' lives, it boxes their lives in limited topics about weapons, tribal culture and Qat, and other easy and repeated topics.

The image of an Arab has always been demeaned in Western media; we are told that we, Arabs are barbarians, terrorists and uncivilised. Yemen falls into that stereotyped image which perhaps can be summarised in the "Salmon Fishing in -the- Yemen" movie. The movie demonstrates to be one of the best movies that wrongly portray Yemen. It's based on the novel with the same title for a novelist that has never been to Yemen. The movie crew, including the actors and the actresses never been to Yemen, as well. The movie was never shot in Yemen. How can we have a movie depicting a country without touching its ground for real is something I don't understand!

Images' Use among Yemenis

As movies are discussed, here is a Yemeni movie that's one of the best movies that genuinely used images to relate to Yemenis. "I am Nojoom, Age 10 and Divorced" by the Yemeni filmmaker, Khadija al-Salami is a movie inspired by the book "I Am Nujood, Aged 10 and Divorced" which was about the real story of the Yemeni child Nujood who is believed to be the first Yemeni child to get divorced in Yemen. The movie was shot in Yemen and following its release has won several international awards. The movie is genuine and honest; its message is to raise awareness about the child marriage tragedy in Yemen. Unfortunately, the movie has not been shown in Yemen, due to the absence of established cinema and, most importantly, the consecutive occurrence of armed conflicts and violence, since the release date of the movie in 2014. This made politics dominate any intellectual and cultural debate in the country.

Media in Yemen is obsessed by a political debate that mainly revolves around today's political leaders. For instance, topics that dominate media in Yemen are the states of the ousted president, Ali Abdullah Saleh, president, Abdurabou Mansour Hadi, and Houthis' leader, Abdelmalik al Houthi. Images about this or that political leader represent a mirror in which Yemenis see through each other. Polarisation is extreme and any middle ground is inevitably absent. 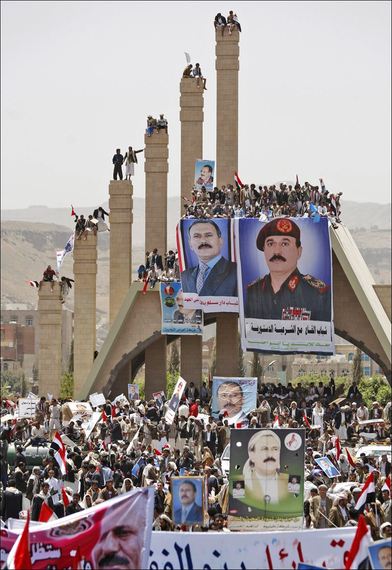 In this regard, one of the issues that concerned me the most is the issue of Misogyny and how images are used in Yemen's political debate. Throughout the past 5 years, since the beginning of Yemen's 2011 uprising, and along the way with my blogging experience, I found one pattern of a concept being repeated whenever images are used and meant to demean a political leader. That is, whenever any political camp wants to insult another political camp, the easiest thing to do is to portray him as a woman. For example, when ousted president Saleh is meant to be demeaned, he's being portrayed with full make-up and jewellery so he can supposedly look like a woman. In that way, there is an association being drawn between a demeaned status for men and being a female; an expression of an insult is channelled by describing the other as a female. 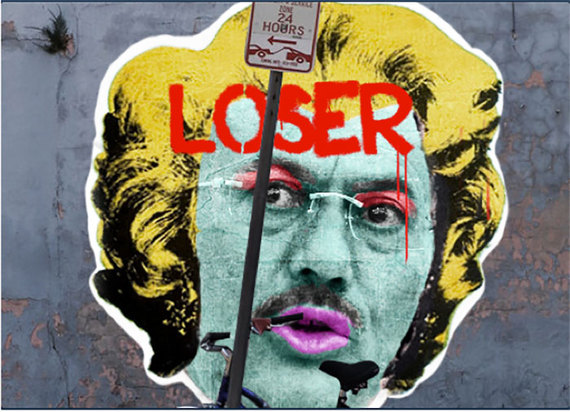 I collected the following images over the past five years. As the political phases in Yemen develop, Yemen's social media users seemed busy designing and posting these images - which sometimes found their way to the streets' protests as posters. 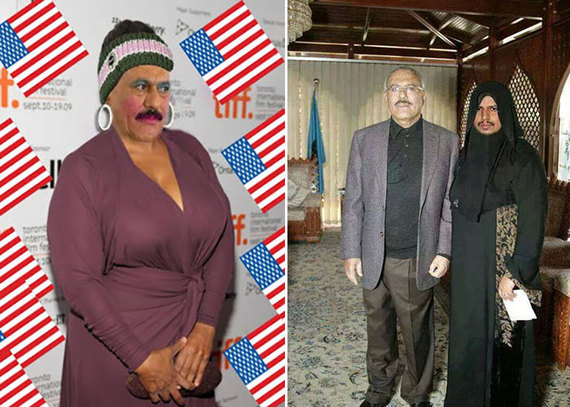 Speaking of protests, the world was impressed in 2011 by Yemeni women's participation. Little did they know that those women were to a large extent affiliated to the second largest political party, the Muslim-brotherhood version in Yemen, Al-Islah party. Their participation was only out a decorative move. However, the women who took the streets independently, challenging ousted president Saleh's regime and Patriarchy -which obliges a gender-based segregation between the two sexes in public space- did not receive the same worldwide attention; even worse, they were doomed to be hit by the walls of Patriarchy. These women's rebellion provoked Yemeni men. At the beginning of Yemen's 2011 uprising, a group of men and women tried to hold a gender-mixed protest, but the protest was not only fated to be dispersed but also to be violently attacked. In particular, the women had the biggest share of humiliation and assault. 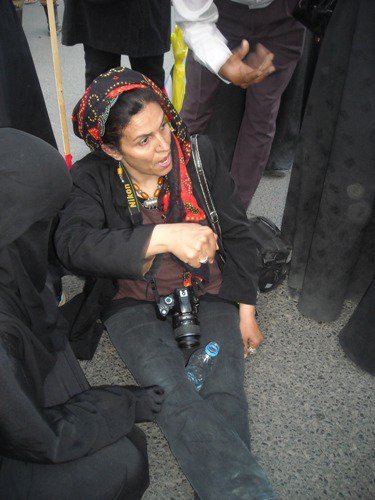 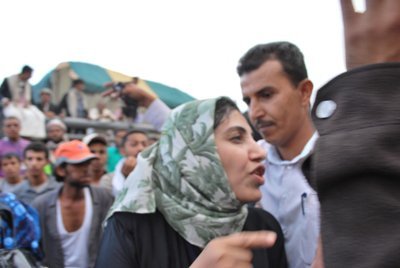 The perception that women are inferior exists in Yemen; as much as, it exists in the Arab world. Women are believed to be "3awrah". At the start of the Arab Spring, a group of Arab feminists created a page on Facebook that calls for the uprising of women in the Arab world. People rushed to the page with their posts, protesting against how females are treated in the Arab world; as 2nd class citizens, if not even worse. I was struck by this post from Yemen, which dismays any claim that says women in Yemen are not perceived as inferior. 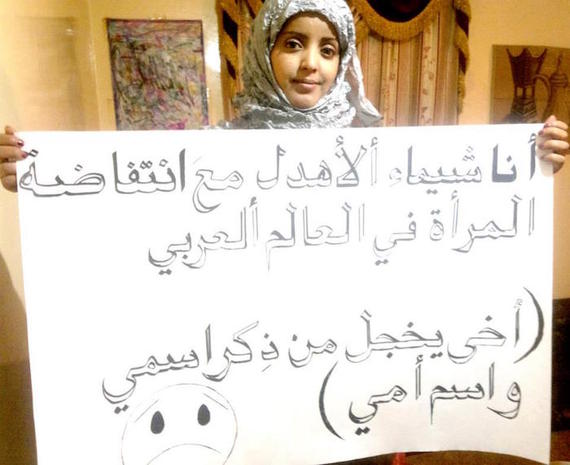 (I am Shima'a Al-Ahdel with the Uprising of women in the Arab world. My brother is ashamed to say my name and my mother's name.)

The problem of insulting a male political leader by describing him as a female is something that a Yemeni man won't understand unless we reverse the meaning. I once had a discussion with a Yemeni male friend who used to like using sexy women images on his facebook to tease and provoke the rival political camp. "I don't mean to insult women," he told me, "I just want to tease my enemies." I said, have you ever seen a woman using images of sexy men to insult her enemies?" My friend stopped to do such moves after he understood my point.

The issue of "Misogyny" and media is a global problem and it doesn't only exist in Yemen, but it is rarely discussed in the Arab and Yemeni media. We often condemn how western media portray us, Arabs; but we don't condemn how our media portray our women. And here, Yemeni media concerns me the most.