WASHINGTON -- When President Barack Obama prepared the nation in September for yet another military engagement in the Middle East, he made sure to cite some success stories -- bright spots on an otherwise gloomy map, to prove that U.S. policy in the region could work.

"This strategy of taking out terrorists who threaten us, while supporting partners on the front lines, is one that we have successfully pursued in Yemen and Somalia for years," Obama said on Sept. 10, in a marquee speech outlining his strategy to combat the Islamic State militant group in Iraq and Syria.

Now the administration is conceding that one of those bright spots may go dark, which could serve as further ammunition for critics who say Obama has mishandled the volatile region.

On Thursday, a leading general said that Yemen -- which has been a ready and willing ally in the United States' drone war against al Qaeda -- may soon fall off the list of U.S. partners, a consequence of a brewing civil war in which the Obama administration has been loath to involve itself, and that most U.S. media has largely ignored.

"We're in danger of losing a key parter in our counterterrorism fight," Gen. Lloyd Austin, the chief of U.S. Central Command, said at the Atlantic Council on Thursday.

Austin was describing the risks facing Yemen's U.S.-friendly President Abd Rabbu Mansur Hadi, who is struggling to prevent a takeover by the tribal Houthi movement, an increasingly powerful Shiite group. The Houthis began fighting the central government in the tenuous aftermath of Yemen's 2011 revolution, and also clashed with the country's population of al Qaeda militants. In recent months, the group has made stunning military advances against the government, even overrunning the Yemeni capital in September.

Following the capture of the capital, Houthi fighters forced the resignation of the prime minister, freed prisoners who were being held at the government’s intelligence headquarters, and secured an influential spot for themselves at the negotiating table amid Hadi's attempts to salvage his government.

Some good news emerged on Friday when a deal was reached to form a new government, with Hadi remaining as president and Houthi ministers entering the new cabinet. Yet there is no guarantee of a lasting peace, particularly with the Houthis more powerful than ever.

Yemen, a small country on the southern tip of the Arabian Peninsula, is largely separated from the Islamic State crisis burgeoning just across the Persian Gulf. But it is a focal point of the ongoing drone war against what many analysts continue to describe -- despite the rise of the Islamic State -- as the single most dangerous terrorist threat to the homeland: al Qaeda in the Arabian Peninsula. Gen. Austin noted in his Thursday remarks that he sees AQAP as "one of the most dangerous" al Qaeda affiliates.

Hadi is keen to cooperate with the U.S. on targeting al Qaeda in his country, as part of the broader ongoing offensive against Islamist extremism. In stark contrast to other nations targeted by U.S. drone strikes, such as Pakistan, Hadi has welcomed strikes, and even praised the drone war. Targeted strikes have killed hundreds of al Qaeda militants in the country, as well as dozens of civilians.

Following the 2011 overthrow of the country’s longtime military ruler, Western ally Ali Abdullah Saleh, Yemen was hailed as an example of a peaceful Arab Spring transition, especially once Hadi came into office in early 2012.

To make matters more complicated, the expansion of the Houthis, who are Shiite Muslims, pits the group not just against the U.S.-backed Hadi government but also against Sunni al Qaeda forces. Clashes between the Houthis and al Qaeda have resulted in dozens of casualties on both sides and a growing number of civilian deaths.

Yemenis and outside analysts describe the clash as yet another flashpoint between the region's Shiite and Sunni blocs, which are led, respectively, by Iran and Saudi Arabia.

Baleeq al-Mikhlafi, a leading Yemeni politician, told The Wall Street Journal days ago that Saudi Arabia, a U.S. ally that has helped shore up the Western-friendly Hadi government, seems "worried today more than ever" about the situation in Yemen.

"Yemen is Saudi’s backyard,” said al-Mikhlafi. “Iran is the new big brother in the region, and the West understands that. Iranians haven’t lost a political war in the Middle East in ages.”

For now, U.S. cooperation with the Yemeni government is ongoing, giving the U.S. some accomplishments to point to as its ISIS strategy falters at the other end of the Middle East. On Friday, Yemeni officials said their security forces had killed a senior al Qaeda leader, and just days earlier, several of the group's leaders were killed in drone strikes.

Still, the U.S. seems to have no idea what exactly the newly empowered Houthis want.

“We don’t have a clear understanding at this point about their intentions,” State Department spokeswoman Jen Psaki said last month, shortly after the group made a series of territorial gains.

The next steps for the U.S. remain unclear. Austin said in his Thursday remarks that the U.S. is "very, very interested in seeing how this plays out in the coming days ... [and] must do what we can to continue to help President Hadi and the government to stabilize and reassert control." The U.S. has managed to secure U.N. sanctions on two Houthi leaders and the still-powerful Saleh, who is believed to be helping the Houthis.

But more overt involvement would likely be unwelcome: The U.S. ambassador to Yemen has already been accused of trying to shape events by forcing Saleh's departure.

The White House declined to comment on the U.S. approach to the situation in Yemen, and U.S. Central Command did not immediately respond to The Huffington Post's request for clarification on what steps Austin would like to see taken. 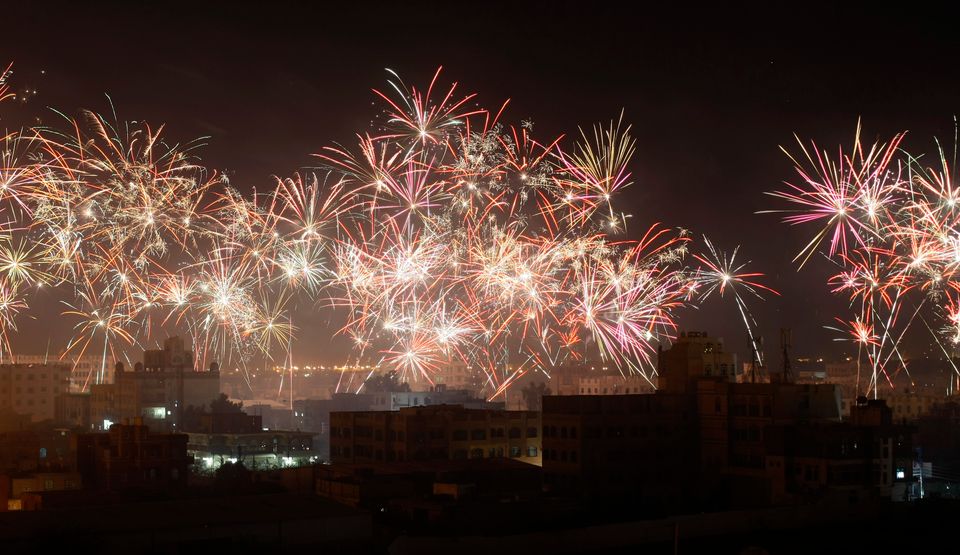 1 / 13
Houthi Shiite rebels release fireworks as they celebrate Sunday's signing of a U.N.-brokered deal that gave them unprecedented influence in the presidency and over the Cabinet, in Sanaa, Yemen, Monday, Sept. 22, 2014. (AP Photo/Hani Mohammed)
ASSOCIATED PRESS