By Mohammed Ghobari and Mohammed Mukhashaf

The U.N.-brokered pause in the fighting was meant to last a week to allow aid deliveries to the country's 21 million people who have endured more than three months of bombing and civil war.

A coalition of Arab states has been bombing the Iranian-allied Houthi rebel movement - Yemen's dominant force - since late March in a bid to restore to power President Abd-Rabbu Mansour Hadi, who has fled to Riyadh.

That coalition said on Saturday that the Yemeni government in exile had not asked it to pause, according to a news flash on Saudi-owned Arabiya TV. Yemeni government officials were not immediately available to comment.

Air raids pounded Houthi and Yemeni army units in the capital Sanaa and in the embattled southern cities of Taiz and Aden, where residents also reported intense artillery exchanges between the fighters and local militiamen.

In Aden, one of the country's most deprived and war-torn areas, witnesses said Houthi forces fired mortars and Katyusha rockets toward opposition fighters based in northern areas and around the city's international airport.

A 15-year old boy was killed in Houthi shelling on a civilian house in the southern city of Dhalea hours after the truce, residents said.

Bombing by the Arab alliance and fighting have killed more than 3,000 people since March 26. 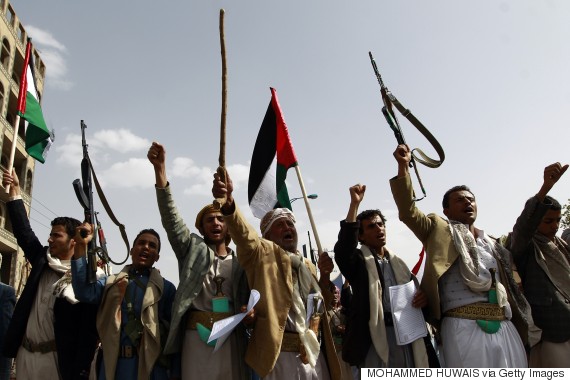 Yemeni Houthi supporters during a rally in support of Palestinians, on July 10, 2015 in capital Sanaa. (MOHAMMED HUWAIS/AFP/Getty Images)

The Houthis, who hail from the Shi'ite Muslim sect, and their army allies say their spread throughout the country is part of a revolution against a corrupt government and hardline Sunni Muslim militants which they say are allied to the opposition forces, and they vowed to keep up the fight despite the truce.

"Our security and armed forces maintain their right to fight and hunt down al Qaeda and Islamic State elements as part of our just defense of our people," Colonel Sharaf Luqman, spokesperson for the Houthi-allied army, said in a statement on Saturday.

All parties in Yemen's conflict had welcomed the announcement of the truce and called for it to be extended.

But the exiled government wants the Houthis to release prisoners and give up land they have seized in battle, while the Houthis say they doubt any calm will last.

Washington fears turmoil in Yemen will strengthen al Qaeda in the Arabian Peninsula (AQAP), the deadliest branch of the global militant group.

AQAP's new leader Qassim al-Raymi, appointed after his predecessor was killed in a U.S. drone strike last month, called for attacks on the United States in a taped speech released on Thursday. (Writing by Noah Browning; Editing by Toni Reinhold and Pravin Char)