The close race between Hillary Clinton and Donald Trump has stymied everyone with a rational brain. How could a human cheese doodle with anger issues possibly be this close to the presidency?

Many people are saying Trump's similarities to He Who Must Not Be Named are deeper than we could have ever imagined. I have heard from hundreds of people who say there are very very many similarities.

Did you notice the sniffling during the first presidential debate? Have you ever wondered what happened to the Dark Lord's nose? Let me be clear, I am not saying there is not a connection, believe me.

I believe there is one very very very good way to defeat Trump, and that is to destroy the Horcruxes. Because I am a very very tremendously smart and talented woman, I have already found out what they are. Some people say they have experience looking for Horcruxes, but it's bad experience. They don't have the stamina. Believe me, I have a winning temperament and I know what they are.

It's up to you now, Hillary.

The Seven Horcruxes of Donald Trump

Hillary's emails - Have you ever wondered why Trump is so angry about the deleted emails? Wouldn't you be irritated if a piece of your soul was literally destroyed? One down, six more to go.

Obama's birth certificate - Conservatives suggested that Obama did not even have a birth certificate. This made Drumpf very nervous since it happened to be a Horcrux, so he jumped on the bandwagon to have it paraded out. He wanted to make sure it was safe.

Miss America crown - What can I say? He likes expensive, pretty things.

His other daughter - Why was Tiffany missing from the creepy millennial photo? He is hiding her in his hair to keep her safe. The rest of his children appear to be under the Imperius Curse to keep them quiet. Don't worry, you don't have to kill her - just bring her down from a ten to a nine on the Trump scale of objectifying women. 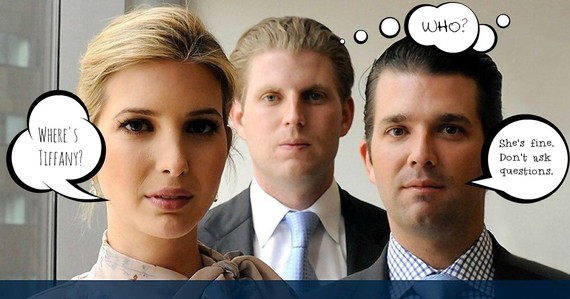 His tax returns - Yes, there are probably enough legal issues with his taxes to keep the world's top accountants busy for decades, but the real reason he is keeping them hidden is that if you read them backwards you destroy a piece of his soul.

His hair - He keeps his coiffe close (except when the wind catches it). It may look like a dead fox spun in a cotton candy machine, but it is actually his most important Horcrux. Let Biden destroy this one.

I know you may be disappointed that Hillary is not the last Horcrux. I'm sorry, but this is not a fantasy book, this is real life.

"Of course it is happening inside your head, Hillary, but why on earth should that mean that it is not real?"