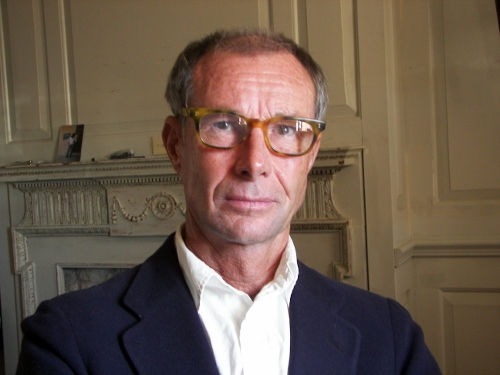 When the flea-market find of a possible Renoir hit the news, my first thought was: Pierre-Auguste Renoir? Or Ken Perenyi? I had just that morning come to the end of Perenyi's fascinating memoir, Caveat Emptor: The Secret Life of an American Art Forger (Pegasus Books), and my thoughts about art, the art market, and confidence games had been perfectly scrambled. Now I wasn't sure which made for a better fantasy: that the mystery painting was a long lost Renoir bought for seven bucks, or a newly-found Perenyi that would sell for more than $70,000. But one thing was certain; to capture the attention of the art world as it has, the painting must be remarkable. And so, too, is Caveat Emptor.

In Caveat Emptor, released August 15 to critical acclaim, Perenyi tells the story of how he stumbled into the forgery game as a working class kid in New Jersey in the late '60s, eager to please some new and older friends whose own artistry and escapades would leave any kid star-struck and clamoring to fit in. As his education in fine art and antiques evolves, so do his talents, and in no time he is cranking out reproductions of mid-19th century masters that easily fool the experts. Eventually, however, after making millions and traveling the world and hobnobbing with the rich and notorious, Perenyi finds himself face to face with the mob and the FBI -- escaping both by the seat of his pants through sheer audacity and good fortune.

Now, the statutes of limitations long past, Perenyi's confessions of his confidence game and remarkable art career make for a captivating read. Yet as I reached the end, I was expecting some sort of spiritual evolution, a concluding chapter where the narrator would have confronted the morality of his deeds and recognized the shaky moral ground he stood on. I got no such closure. Instead I was left disappointed -- but less because he didn't apologize and promise he was reformed, but more because the book was over. I wanted to read more, to learn more, and to spend more time inside the puzzling mind of such an astounding artist.

But first back to that Renoir. The emergence of this painting on the art scene led me to wonder, has Perenyi really retired from the forgery game altogether, as he says, selling his "reproductions" to well-heeled buyers who now sign acknowledgments that they know their purchases are "fakes?" Are there other fakers out there, equally as skilled and audacious? And just what makes for a fake anyway, when the skill of the painter is so great that art dealers will readily pay six figures to acquire them?

So I decided to ask Perenyi himself about the Renoir, and dropped him an email. "The painting looks correct in every way," he wrote, explaining how the details of the frame and backing supported the conclusion it could well be a Renoir. "All of this would be very difficult to fake, but not impossible." Yet Mr. Perenyi has established that he is a master at making possible the impossible. Whereas most forgers today focus on modern works that require great technical skill at painting, what distinguishes him among the great forgers is his ability to fake not just the techniques of the masters, but the antiquity of their works. In other words, he can fabricate a damned convincing antique painting, from the cracks on the paint to the aged stretchers and joints of the canvas, a process he details in his memoir as he shows how he simulated everything from fake repairs to tarnished fly excrement.

Perenyi joins a long pedigree of world-renowned art forgers of incomprehensible talent, going all the way back to Michelangelo. Unable to sell his early work, Michelangelo went so far as to damage and bury a sculpture he had made in order to simulate age. He then passed it off as an ancient Roman statue, thus fetching a much higher sum than his own authentic efforts could bring him at that time. And at the end of World War II, Han van Meegeren's faked "Vermeer" was so good that he found himself facing a potential death sentence for looting national treasures after he was arrested for selling a painting to Nazi officer Hermann Goering. Unable to convince authorities that he was no thief, but a mere art forger, van Meegeran proved his innocence of the greater crime by painting a "Vermeer" in his jail cell.

Even more recently, Wolfgang Beltracchi was imprisoned for six years in Germany after making millions in his long career of painting forged masterpieces. It was a mislabeled paint tube that did him in, when traces of titanium dioxide (unavailable in paints before 1916) were found on a painting that he thought he had painted in pure zinc white. And throughout the 20th century, few could rival Elmyr de Hory who was immortalized by Clifford Irving in his novel F is for Fake (and which led to the author's own disastrous, but near successful, attempt to forge Howard Hughes' supposed autobiography). These men were not only masterful con men, but they were masterful artists.

Yet for all their mastery of art, there remains the troubling issue of morality. What does it mean to turn such a phenomenal skill toward criminal ends? And just how criminal is it, really? After all, the audible silence of the art world in the wake of Perenyi's tell-all book speaks volumes to their own complicity in profiting from works that they know or should know are not authentic. So I gave Perenyi a call and what followed was a long and fascinating conversation about art, technique, the art market, his career, and the thrill of the con. Stay tuned for a taste of that conversation, in Part II.

And as for the Renoir, which is scheduled to be auctioned on September 29? As Perenyi's title suggests, let the buyer beware. And as the glowing reviews suggest, if you have an interest in art, read Caveat Emptor to discover just how utterly strange, surreal and susceptible is the art world that brought us Renoir and, like it or not, Ken Perenyi Chances are you'll like it.