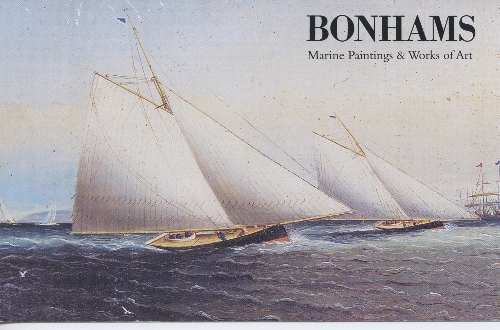 Just what does it mean to paint a beautiful picture and pass it off as a masterpiece? If the experts are fooled, is it any less masterful? In my review of Ken Perenyi's memoir, Caveat Emptor: The Secret Life of an American Art Forger, I touched on the issues raised in the book. But after talking at length with Perenyi it became clear that the stories he has to tell are not just about his own career, but instead raise morally complex issues of authenticity, fakery and tom-foolery, issues that go beyond a single art forger to point a gilded paintbrush straight in the eye of the global art industry and its authoritative experts who would simultaneously revere the work while reviling the artist who produced it.

Or have they reviled him? One thing is certain, while Caveat Emptor makes clear that anyone in possession of a 19th century James E. Buttersworth or Martin Johnson Heade might well have in their hands a 20th century Perenyi instead, no one has come forth to have their masterpiece checked out. And no one from the art establishment, which is to say the brokerages, the auction houses, the galleries, the dealers or the collectors, has said a word in response to the first American art forger to go public.

"My lawyers said at the time, 'Ken, when your own victims circle the wagons to prevent you from being indicted, that's got to be the definition of the perfect crime.'" Why would they protect him? Perhaps a better question is why would they turn him in? To do so would reveal not only the fact that they were duped. It would also mean they could not continue profiting from his work.

"I would say from the art world establishment... the money is immaterial. They're not interested in trying to recover money at all. What they are worried about is their reputation. ... At the time of [the FBI] investigation, they had several important paintings that had gone through the auction houses that they knew were authored by me. And by looking at those paintings they would say, 'Oh my God, if he was good enough to do this, this certainly wasn't the first. So if he's indicted, what is this going to open up?'" What it would open up, Perenyi suggests, is that there are well over a thousand of his paintings out there right now, masquerading as "authentic." How does that impact the buyers of these works?

"If anybody discovered a painting they bought some time back was in fact one of mine, they could go back to the auction house even today and get a refund from it," Perenyi says. But they would only get what they paid, he concedes, not the potential profit they might have made had the painting been authentic. Yet no one has returned demanding their money back. Once they know, they can no longer claim the painting to be authentic without themselves committing fraud.

Moreover, an original Perenyi forgery might well be worth hanging on to. European art forger Han Van Meegeran's paintings became so valuable after his arrest that even his own son began forging his forgeries. Similarly, the work of renowned art forger Elmyr de Hory is so valuable that his forgeries are often forged. The value of these masterful forgeries is so significant that Perenyi describes it as "a perversity in the art world."

"There is a definite market for great fakes today. And especially from a famous forger," he concedes. But investing in forgeries has other ramifications that raise questions as to the complex ethical implications of art fraud. "I was targeting an area of art, most notably 19th century American paintings, when they were just breaking out as a new, exciting area to invest in. ... It was the perfect area to exploit." Perenyi describes in detail, both in the book and in our conversation, how he succeeded by tapping a market where no one expected to find forgeries.

The result was not just Perenyi's own profit, nor the handsome profits of the dealers and auctioneers and investors who made tidy sums with each passage of the artwork from hand to hand. And just as the value of Heinrich Campendonks tripled after German art forger Wolfgang Beltracchi introduced a series of Campendonk forgeries on the market, so, too, did interest in mid-19th century American paintings increase when Perenyi introduced his forgeries to the art market. "I've brought to light a lot of names of American painters that people are going to pay attention to now; they otherwise never would have heard of these guys like James Buttersworth and Martin Johnson Heade."

Indeed, Perenyi's contribution to the art world is not one to be dismissed with mere condemnations of his fraud. It could well be argued that he has made far more money for investors than he has cost them, he has contributed to greater awareness of a whole genre of American art, and he has introduced an enormous body of work to the art market that will remain in circulation for centuries. But do these "fakes" count as authentic art?

One thing few people realize is that art forgeries are only sometimes replicas of actual paintings. After all, if a forger copied a known masterpiece, unless it were lost or stolen, the fraud wouldn't hold up for long. Sooner or later the location of the original artwork would be confirmed and the forgery spotted as a fake. Instead, art forgers are more likely to paint in the style of the masters, finding periods when the artist did not produce known works and filling in the empty space with a series of "newly discovered" paintings. Or they replicate a theme or feature that the artist was known to repeat in many paintings, such as the hummingbirds in Perenyi's "Heades" that he noted Heade had used repeatedly in his Gems of Brazil series.

Achieving the level of perfection that such forgeries require, however, requires doing more than mimicking a painter's technique. Like a method actor who lives the role he plays with such intensity and focus that he begins to instinctively move and speak and think like the character he is playing, an art forger needs to channel his ancestral muse so that he can envision a convincing -- and compelling -- fabrication.

"The only way you can create a great fake," Perenyi explains, "is you have to be extremely familiar with the work of the painter. You have to study it, you have to dream about it at night, you have to meditate on it, you have to look at endless examples of it, until you're inspired yourself to create something as he would." Just as students of the great masters studied their teacher's techniques until they could produce paintings so similar to their mentor's that the master himself would sign his name to it, so too does an art forger approach his task.

Yet the troubling issue of morality remains: unlike the master's student who "ghosts" a painting his teacher takes credit for, the art forger executes his fraud without the original artist's consent, exploiting a known name for his own prosperity. And yet, and yet...

Why is it so much easier to demonize the forger than those who make his deceit so possible? Because he perpetrated a fraud? Yet is not the art market itself a fraudulent enterprise? Given the incomprehensible explosion of prices paid for masterpieces (and a whole lot of junk), a far more compelling question of morality emerges. When Edvard Munch's iconic painting The Scream recently sold to a private collector for nearly $120 million in the midst of a global depression that has left millions homeless, hungry and jobless, one can only wonder what such a price for colored cardboard says about our social priorities.

A great painting? Yes. Yet that $120 million version of The Scream is a pastel drawing on cardboard that is one of several copies Munch himself had made from the original. From a painter who was known to throw his paintings on the floor to be stepped on, use them to cover pots of food he was cooking, and otherwise treated his own work with less respect than most people give to their junk mail, the authentic "value" of his work is as much a product of the art world's trickery, illusion and quest for artificial profit than Munch's artistic execution.

All masterpieces have their histories and social constructions, and these social constructions do as much to create "value" as the works themselves. As long as the art market thrives on profit in the mega-millions while artists themselves remain disparaged, ignored and forced to "brand" themselves to succeed, art forgery will be a lucrative career for the most talented and visionary among them. Who better to tell us what it means to the original artist whose work has been replicated than Pablo Picasso. "If the counterfeit were a good one," he once said, "I'd sit right down and sign it." For all we know, he did just that.