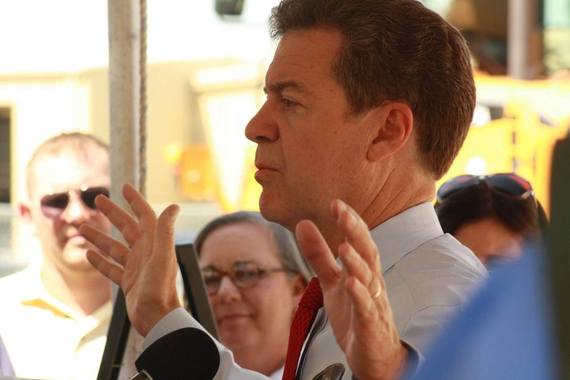 Let's start with the obvious: The person at the top of the ballot is going to get the most attention in any presidential election year. Donald Trump being what he is only exacerbates that reality. The Democratic nominee, presumably Hillary Clinton, should focus most of her energy on explaining why she would be a better president than Trump.

However, there are hundreds of House seats up for grabs, not to mention one-third of the seats in the U.S. Senate. In close races, most if not all of the Republican candidates already appear to be running away from Trump. The most endangered Republican Senate incumbents are all finding excuses to miss Trump's Cleveland coronation, including John McCain, Ron Johnson, Kelly Ayotte, Mark Kirk, and even Rob Portman, whose state is actually hosting the Republican National Convention. Portman apparently plans to host his own "miniconvention" down the road from Trump's.

These Republicans will attempt to fool voters into believing that even though Trump is the leader of their party, they will somehow provide an independent voice. Democrats need to be able to counter that attempt. Fortunately, in addition to candidate-specific responses, we have a clear argument to make that is easy to understand and will move chunks of voters away from any Republican--if we take advantage of it, that is. The argument is: Kansas.

Give Republicans credit--they know how to take an argument and make it stick. Republicans spent years shouting "Remember Jimmy Carter" at every Democratic presidential nominee after 1980. And it worked, for a while at least. They also shouted "Look at California," at least until Democrats actually, finally, got control of the governor's mansion and won the necessary supermajorities in the state legislature to make real changes, including raising taxes on the wealthy. After they did so, California became one of the most successfully governed states in the union, paying down debt and turning huge deficits into multibillion dollar surpluses, all while achieving above average economic growth. Thanks to Kansas, Democrats across the country have the opportunity to make a similarly powerful argument, one that has the advantage of being, well, true.

In January 2011, Gov. Sam Brownback took office, and his arrival gave the Kansas Republican Party control over the legislative process. They proceeded to implement the Republicans' wet dream agenda: They passed huge tax cuts for the wealthy along with tax cuts on business profits, significantly reduced business regulations, and at the same time cut spending on welfare, rejected federal Medicaid money, and put the delivery of Medicaid services into private hands.

One of Brownback's advisors was Republican economics charlatan Arthur Laffer--the guy behind the idea that cutting income tax rates, at least to a certain, never-defined level, would increase revenue. In other words, the guy behind the Reagan tax cuts that helped create the contemporary era of income inequality. Mr. Laffer called what Kansas Republicans did "a revolution in a cornfield."

Brownback's budget director was Steve Anderson. Who is Mr. Anderson? He's the guy who created a budget model for Americans for Prosperity. That's the organization the Koch Brothers founded to advocate for their right-wing, Ayn Randian vision of America. Brownback wanted to take his Kansas vision nationwide: "My focus is to create a red-state model that allows the Republican ticket to say, 'See, we've got a different way, and it works.'"

If you define "works" as "sucks," then Brownback was 100 percent right. By implementing the conservative Republican blueprint for governing--what the governor called a "real live experiment"--Kansas has run itself into the ground:

Marginal gains at the municipal level were dwarfed by the $688 million loss that Brownback's budget wrought in its first year of operation. Meanwhile, Kansas's job growth actually trailed that of its neighboring states. With that nearly $700 million deficit, the state had bought itself a 1.1 percent increase in jobs, just below Missouri's 1.5 percent and Colorado's 3.3.

Those numbers have hardly improved in the intervening years. In 2015, job growth in Kansas was a mere 0.1 percent, even as the nation's economy grew 1.9 percent. Brownback pledged to bring 100,000* new jobs to the state in his second term; as of January, he has brought 700. What's more, personal income growth slowed dramatically since the tax cuts went into effect. Between 2010 and 2012, Kansas saw income growth of 6.1 percent, good for 12th in the nation; from 2013 to 2015, that rate was 3.6 percent, good for 41st.

Meanwhile, revenue shortfalls have devastated the state's public sector along with its most vulnerable citizens. Since Brownback's inauguration, 1,414 Kansans with disabilities have been thrown off Medicaid. In 2015, six school districts in the state were forced to end their years early for lack of funding. Cuts to health and human services are expected to cause 65 preventable deaths this year in Sedgwick County alone. In February, tax receipts came in $53 million below estimates; Brownback immediately cut $17 million from the state's university system. This data is not lost on the people of Kansas -- as of November, Brownback's approval rating was 26 percent, the lowest of any governor in the United States.

In comparing the economic performance of Kansas along with Wisconsin, another state that swung to Republican control after the 2010 elections, to the performance of California and Minnesota (another state that switched from a Republican to a Democratic governor in 2010), the Democratic-run states did far better in terms of job creation and overall economic performance. And as previously mentioned, California is now running budget surpluses while Kansas' debt grows month after month, as revenues keep on falling short of expectations month after month. That's some real live experiment.

We could also talk about the radical steps Kansas has taken to suppress the vote, but let's stay focused on its economic performance for now. Just this week in fact, Kansas' "red-state model" has created a "constitutional crisis" over the state's failure to provide adequate funding for public education. Red-state model, indeed.

Every Democrat running for the House and Senate needs to explain what happened in Kansas, and explain to voters that this is exactly what will happen to our country if we elect Donald Trump along with a Republican House and a Republican Senate.

Trump isn't interested in particular budget details, which means that if Republicans win, the Congress--which would be dominated by right-wing conservatives who think just like the Koch Brothers and their puppet Sam Brownback--will pass a budget that will bring the Kansas meltdown to all 50 states. Democrats should hang Brownback's quotation around the neck of every GOP candidate: "My focus is to create a red-state model that allows the Republican ticket to say, 'See, we've got a different way.'"

We have to make sure the American people know that the Republican "way" has been implemented--and it has failed miserably. A vote for any Republican is a vote for that failure.