My son just had turned five. This was the first birthday where he really understood the importance of his big day and the magic that comes with no longer being four years-old. I wish I got that excited about my birthdays. 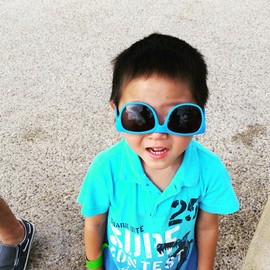 "Yes darling, you are big." I assured him.

A few days later, we were out running errands. While standing in line at the deli, a woman smiled warmly at us and asked how old he was.

"I'm five," my boy heartily announced in a way that only a newly-minted five year-old can.

The woman looked at me with a question mark in her eyes. Is he really five?

I smiled and nodded, not thinking it was any big whoop that she wanted to fact check. When my daughter was in grade school, she had a cute little habit of telling people she was 27. Kids are weird.

"Wow. But he's so tiny," she reached out to ruffle my son's hair. "Doesn't your mommy feed you enough?" Her tone was playful, but her words cut me.

Yes, I know my kid is small. I know the lady in the deli didn't mean to be rude or hurt my child's feelings. I know she didn't intend to question my fitness to be a parent. She was simply pointing out the obvious even though it was... well, obvious.

We bought our cheese and moved on. My son was uncharacteristically quiet, not greeting every shopper we passed in the aisles with an energetic "hi, what's your name?" or trying to convince me we needed that jumbo box of Spiderman fruit snacks, which was his normal MO.

"Mommy, you said I was big." He looked at me reproachfully.

He had a point. I'd spent that last week or so talking about how big and grown up he was, only to have that bravado shattered by the casual comment of a stranger.

How in the hell do I answer that?

Although Kyle is five he's about the size of tall two year-old. Size 2T pants fit him fine around the midsection but they're a tad too short. I guess you could also say he's the size of a short three year-old but you catch my drift. He's little.

In spite of his size, he's a healthy kid, although he didn't have the greatest start in life. He was born with complex digestive problems and was orphaned when he was just days old. Medical care and nutrition during his early years were marginal at best. We adopted him shortly after his third birthday. He was severely underweight and malnourished on the day we met him. I've spent the last two years making sure his belly is full and trying to play catch up.

He's tiny. Maybe his lack of care during those important developmental years is the reason he's so small. Maybe his biological parents were short and skinny. I don't have that piece of the puzzle. Maybe he'll have a growth spurt next month and be the tallest kid in the class. Who knows?

He's not even on the growth charts for kids his age, but he's holding his own. I spent the first few months home with him spooning heavy cream and butter into his food to up the calorie content and worrying about whether he was getting enough nutrients. In spite of his bumpy beginnings, my boy is thriving and growing. Healthy. But still small. I know my kid is small.

I find myself internally cringing each time someone asks how old Kyle is because the "wow, really? He's such a little guy;" or "gee, I thought he was younger" are getting harder to swallow as he gets older and is able to process what people are saying about his body. I tell him what a big boy he is because... well, that's what moms of five year-olds do. I find myself having to give him pep talks about differences more and more often because of the things that innocently fly out of people's pie-holes. People who mean no harm whatsoever.

What if my kid were chubby? Would people make the same kind of comments? Out loud, in his presence? Such as:

"What are you feeding him?"

Fat-shaming and body image are hot-button topics right now. All you have to do is hop on the interwebs and you'll see a bazillion articles about why it's important to teach kids that it's what's on the inside that counts. About why what your body can do is more important that how you look.

Or does that only apply to people who are overweight? While it's generally considered rude to tell someone they're too large, pointing out that they're too skinny doesn't seem to be taboo. It's not okay to make comments about anyone's body, no matter what size or shape they come in.

I know my kid is small, but he's strong. His body may be tiny but he can run, climb, and kick a ball... although interestingly, being asked to pick up his toys is "too hard" and makes him incredibly tired. Will he one day be the tallest kid in his class? Maybe. He's five. So much of his future has yet to be written. Will he be a star basketball player or an award-winning jockey? I'll settle for a happy and well-adjusted human and I think he's off to a great start. His future potential isn't defined by his stature.

Yes, I know my kid is small. Keep your comments about his body - and anybody's body - to yourself, thank-you-very-much.

Jill blogs about motherhood, midlife and adoption at Ripped Jeans and Bifocals. She would love to connect with you on Facebook and Twitter.

More:
body confidenceinternational adoptionraising kidsParenting Parents
Newsletter Sign Up
Raise the kind of person you'd like to know
Subscribe to our parenting newsletter.
Successfully Subscribed!
Realness delivered to your inbox