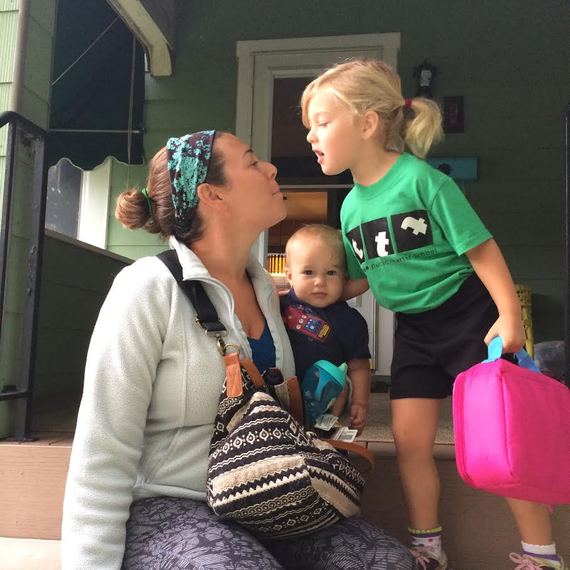 Recently, a British principal sent out a PSA about the school's dress code. But it wasn't for the students -- it was for the parents, concerning their increasingly slovenly appearance at school drop-off. Some parents, the note said, had been showing up to bring their kids to school in pajamas (even slippers!), and the principal, Kate Chisholm, said she felt this was setting a poor and potentially damaging example for the students. The message has since gone viral, and Chisholm says she is shocked by all the attention her note has received.

Sure, on one hand, I can see her point. We want our kids to look and feel their best, and as their parents, we should follow suit (pun intended). But the well-intentioned message fails to consider a few important points. For starters, many schools begin early in the morning (some before 8 a.m.), which means some parents simply don't have time to look their best by drop-off time. Most of us would much prefer our children are properly prepared for school instead. With the increasing demands of education, at younger and younger ages, parents have no choice but to play a bigger role in their children's schooling. That often means parents are prioritizing their kids' preparedness over their own.

Some parents may be returning straight home after school drop-off to shower and change before heading off to work. Others might be spending the day taking care of younger sibs who, quite frankly, don't really care what mom or dad is wearing. Other parents might show up in their jammies if they were up all night with a sick child or are not feeling well themselves. (I know when my family is sick, my appearance is pretty much the last thing on my priority list.) But the point is, there are a lot of different reasons why one might not be able to find the time to get dressed for school drop-off, and most of them probably don't have to do with pure laziness. But who are we to judge, anyway?

While I usually manage to slip into some yoga pants, boots and a hoodie for school drop-off, that's about as good as it gets. And if I'm not feeling well or was up all night with the baby? PJs it is. Mornings are crazy in my house, and I only have one school-aged child. Getting a kindergartner and a toddler out the door in the morning is a lesson in patience, and if anyone was going to call me out on my appearance in the morning, I think I'd be pretty annoyed, too. Isn't the fact that my daughter got to school prepared and on time the most important thing? I think so, and we're pretty lucky on the days when that happens. Usually, I'm dragging her out of bed, shoveling oatmeal into everyone's mouths, slapping lunch together and racing off to school. It isn't pretty, but I know from hearing about the experiences of others that it's not an easy feat for most.

Mornings are simply tough for parents, no matter what their situation, and I think we should exercise compassion towards one another, rather than judging each other's appearances. Personally, I'm meeting the needs of a toddler and a kindergartner, and working most days of the week with little childcare. I'm lucky that I get to work from home so that I can be there for school drop-off and pick-up each afternoon, but that means I don't need to look my absolute best in the morning, and I'm thankful for that.

Right now, squeezing everything into my day that needs to be done is a serious hustle, and I can totally understand how on some days, it's easier for parents to simply do school drop-off in their sleep clothes. Maybe it's not desirable, but I get it. My pants aren't too high up on the priority list in the morning, and I'm OK with that. I do, however, do everything in my power to make sure that my child has her schoolwork done, a clean shirt on her back, her teeth brushed and a brush run through her hair. I want my child to look and feel her best, yes, but I don't think my outfit at 7:55 a.m. has a huge impact on that. If that's not enough, then I give up.

Honestly, most parents are doing the best they can, so let's stop talking about appearances. If it's deemed too damaging to see adults in their pajamas, maybe this school should simply implement the good old drop-off line, where parents don't have to get out of their cars at all. If not, they can probably expect to continue to see parents not looking their best once in a while, because welcome to parenting -- it ain't always pretty! On a personal note, my kid's principal can probably expect the same from me. Mornings come early, and as long as my kid is presentable and on time, I'm calling it a win.

More from Mommy Nearest:
29 Parenting Acronyms You Should Know
When It Comes to Parenting, Never Say Never
5 Reasons Why Bribing Your Child Is Awesome

This piece was originally published by Sarah Bregel on Mommy Nearest. Sarah is a freelance writer based in Baltimore. She is also a yoga teacher and self-proclaimed "Mediocre Mama." Join her growing Facebook community, follow her on Twitter or find her at the yoga- and wine-fueled StreeetchyPants.com