It may not have broken the Internet, but a series of photos featuring Kim Kardashian full-frontal and, um, full-buttal, have caused quite a stir.

In the Paper pics, Kim looks predictably hot, and as is the nature of the modern news cycle, everyone's had a theory as to what the reaction to her hotness means. The Daily Beast has done an excellent job rounding up some of the media's most interesting thought pieces, tackling everything from butt love to gender roles to race issues.

But my reaction to the titillating photos, and indeed any female nudies, is a bit more crude: Why are there so few naked photos of men?

The imbalance between female and male nudity in the media is well-documented to the point of being a cliche. And the prevailing notion is pretty simple: Women just look better naked than men. The curves. The suppleness. The smooth skin. For both genders, the female form evokes natural lust.

I know for myself, this definitely holds true, and that I'd much rather stare at this: 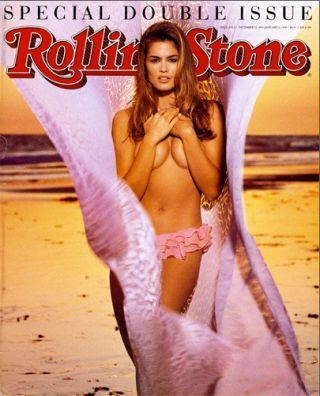 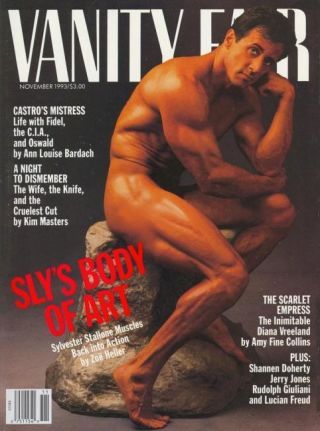 In fact, I find the latter kind of humorous (sorry, Sly)--a reaction validated by a media that routinely plays the male nude form for laughs.

But why? Is the female body really just more objectively interesting? Are naked men really just laughable lumps of flesh? Or are there other forces at play?

So if some sort of base impulse isn't at play, what does shape our different reactions? The obvious answer is socialization . . . and how exactly this shakes out is both complex and fascinating.

In one particularly compelling study, sociologist Beth Eck showed men and women the photos above, of Cindy Crawford and Sylvester Stallone, and discovered some very telling reactions divided along gender lines.

Because men are socialized to be sexual subjects (ie, ones who are conditioned to perceive others as sexual objects), they were more than comfortable objectifying Cindy's naked bod, even registering reactions of condescending praise ("I like that") (Why thanks!). At the same time, they were incapable of seeing a naked man as anything but a sexual object--and so found it hard to appreciate the male form without the suggestion of homosexuality.

When women looked at Cindy, though, no such assumption was made. As Eck put it:

"When women view the seductive pose of the female nude, they do not believe she is 'coming on to' them. They know she is there to arouse men. Thus, they do not have to work at rejecting an unwanted advance. It is not for them."

What they did do was compare their own objectified bodies to Cindy's objectified body. And get this: They even played the comparison game when showed a photo of a woman not conventionally attractive. Lamented one woman after looking at an image of an overweight naked female, "I am disgusted by it because she is fat, but I'm also . . . I need to lose about 10 pounds."

And as for looking at Sly in his bare glory? Like men, women just weren't into it--in this case, because they felt uncomfortable when placed in the more "masculine" role of serving as an ogling sexual subject.

What's interesting about all this is that it's more than unfair to women. It's also unfair to men, like poor Stallone, who can't be viewed as desirable by either gender in their most vulnerable sexual state. And the whole thing, of course, becomes a vicious cycle: fewer images of naked men in a non-funny context means fewer opportunities to reshape how we view said men.

It's just another example of the ways in which gendered social norms cut both ways, hurting both women and men. In a fair and truly gender-equitable world, there would be an equal assortment of nude shots featuring both genders, and we wouldn't be conditioned to perceive of them as anything other than damn fine.

If my feminism makes me fight for some naked Ryan Gosling alongside my naked Kim Kardashian . . . is that really such a bad thing?

This story first appeared at Ravishly.com, an alternative news+culture website for women.