The Drudge Report and several conservative blogs are working themselves into a lather over the new Obama ad noting that John McCain doesn't know how to use a computer.

Their claim is that McCain is simply unable to use a computer because of his POW injuries, citing a March 2000 article in the Boston Globe that states, with no supporting evidence...

McCain's severe war injuries prevent him from combing his hair, typing on a keyboard, or tying his shoes.

Of course, this directly contradicts what McCain and his campaign manager have said. McCain told the New York Times in July:

I am learning to get online myself, and I will have that down fairly soon, getting on myself. I don't expect to be a great communicator, I don't expect to set up my own blog, but I am becoming computer literate to the point where I can get the information that I need.

Campaign manager Rick Davis said in June that McCain would grab Blackberrys from reporters and tool around on the internet:

He actually is, he always is grabbing people's Blackberrys on the bus. In fact, no reporter's Blackberry is safe from his prying eyes. He loves to tool around on the internet, he especially loves the videos that get produced that usually poke fun at him. I think that's his most entertaining part of the internet.

And in a Politico interview, McCain said again that he uses a blackberry and plans to go online:

I use the Blackberry, but I don't e-mail, I've never felt the particular need to e-mail. I read e-mails all the time, but the communications that I have with my friends and staff are oral and done with my cell phone. I have the luxury of being in contact with them literally all the time.

And if you don't believe their words, try these photos:

From March 2001: An AP photo, whose caption reads, "McCain works his cell phone in Arlington, Va., checking with staff members on the status of amendments to his campaign finance reform bill" 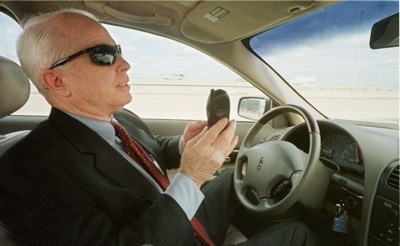 From July 2007: McCain using a cell phone while holding a Blackberry 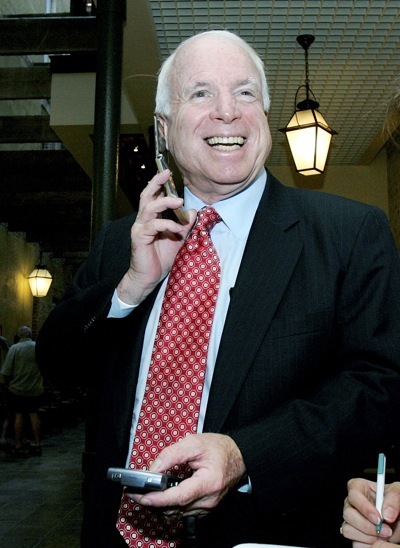 From June 2007: An AP photo of McCain "paus[ing] to check his cell phone during a news conference" 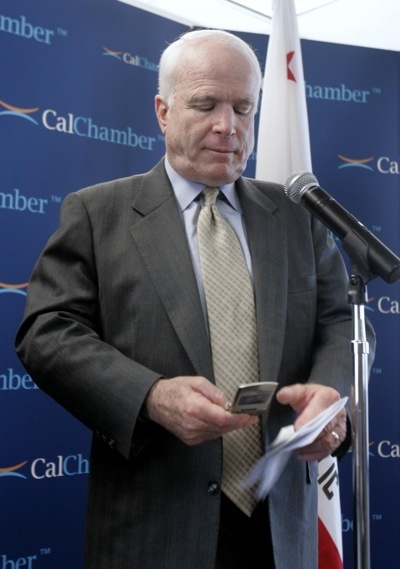