[Full Disclosure: After voting in the primary, I dropped my Democratic Party registration in 2008, over the party's unwillingness to step in and stop some ugly early attacks from the Clinton campaign on Barack Obama. Likewise, I believe that the Clinton campaign's attacks over the Auto Bailout vote were disingenuous and unnecessary. In short, I am no Clinton apologist..]

Last year, the New York Times reported on an apparent discovery by fringe right groups; that they had found a new vessel for their continued attacks on Hillary Clinton, in the form of Bernie Sanders' supporters.

At the time, the story seemed overly sensational. There was no real indication of progressives buying into 25 years of failed and false attacks from the same fringe-right who tried to convince America that Barack Obama wasn't born in the United States.

More importantly, there was no indication that Senator Sanders was going to feed this beast. Quite the contrary. One of the most redeeming characteristics of Senator Sanders -- indeed, something he hung his hat on -- was his unwillingness to get into the gutter, like so many other politicians. As late as January of this year, the Times reported that the campaign still wasn't convinced it should go negative.

But, lately, something has changed. Senator Sanders has increasingly gone after Secretary Clinton not on policy disagreements, but on who she fundraises from. The implication does not need to be spoken - "Hillary Clinton's corrupt and on the take."

In fact, the change in communications strategy was crowed about by Sanders senior advisor Tad Devine, who proudly let the Washington Post know that the campaign was now poll testing negative messages against Secretary Clinton.

A Green Light From the Candidate

As for Senator Sanders himself, he has taken to using words that tie to personal characteristics, like "corrupt" and "obscene" to describe Secretary Clinton's fundraising.

And the candidate who used stop his crowds from booing Senator Clinton's name, has started to allow boos about her ring through his event halls.

Sanders and Weaver stand in contrast to President Obama, who has shut down booing at rallies by saying "Don't Boo, Vote!" so often that you could get sick of watching videos of him saying it.

If candidates (and Presidents) are ultimately the ones who set the example for their supporters, Senator Sanders seems to have given the green light to his supporters to let loose on Senator Clinton -- and not on policy.

From campaign surrogates falsely accusing Secretary Clinton of being under FBI investigation, to many posts from supporters on any social media timeline there is an increasingly bitter, personal tone about Secretary Clinton emanating from the Sanders side of the ledger . What's worrisome is just who is prodding them on.

This week, this post popped up on Facebook, shared and liked by a number of Sanders supporters (the avatars of those sharing are small,but pictures of Sanders): 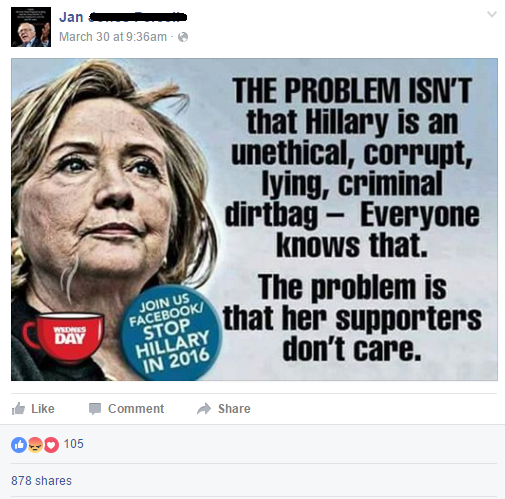 A quick scroll through the advertised page in the graphic revealed this ugly meme: 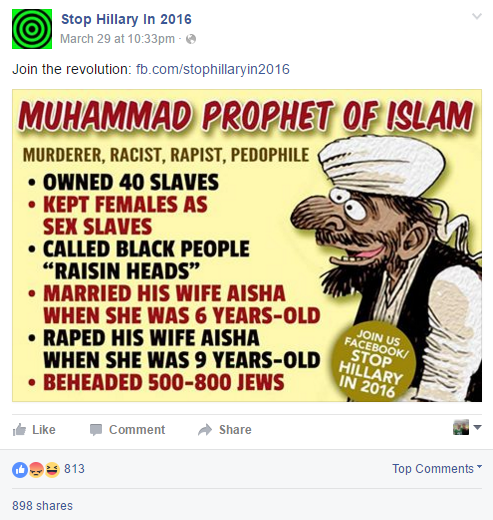 Then there's is this meme being shared by Sanders supporters - sometimes posted in article form, linking to a piece from right-wing Breitbart news. 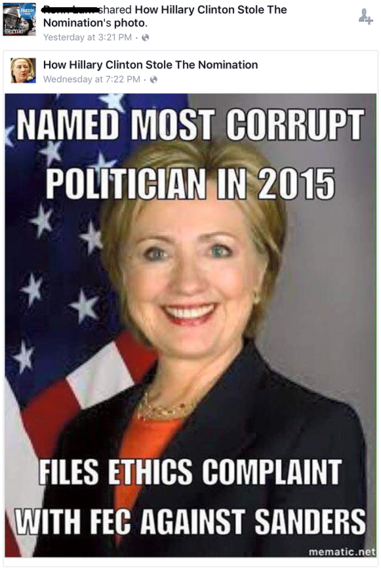 The question, which very few supporters seem to ask, is just who named Secretary Clinton the "most corrupt" politician? Well, that would be the right-wing group, the Foundation for Accountability and Civic Trust, founded by a George W. Bush appointee, and GOP candidate for office.

Whether it is ugly memes and false charges like these, or others spreading through the political landscape, a disturbing pattern is emerging that seemed impossible just a few months ago: Sanders supporters are increasingly embracing and spreading right-wing propaganda.

"Bernie or Bust," or Bust Goes the Senate?

The increasing personal animus towards Secretary Clinton, from Sanders supporters, and the recent lack of willingness from the candidate to calm down those backing his campaign has more people joining the so-called "Bernie or Bust" movement, every day.

The mentality, as laid out in a now very-well publicized interview by actress Susan Sarandon, is that some believe it would be better to see Hillary Clinton lose to Donald Trump, if she's the nominee, because she's just too terrible to bear, and maybe Donald Trump will stoke a revolution.

Ultimately, if Secretary Clinton gets the nomination, the "Bernie or Bust" movement may have no effect in a contest versus Donald Trump or Ted Cruz. She likely can put together the electoral votes needed to win.

However, "Bernie or Bust" may have a very real effect in downballot races - where the numbers of "Busters" who vote Green, or stay home, could cost the candidacies of a number of strong progressives in tight races - from former Senator Russ Feingold to Congresswoman Tammy Duckworth - both of whom are expected to be in very tight races that might determine control of the U.S. Senate. It also may give a bit of a breather to Republican Senators John McCain, Kelly Ayotte, and Pat Toomey, who could be primed to lose close races to their Democratic opponents - if potential Democratic voters don't stay home.

Certainly, it does not help motivate his supporters to come out and support downballot progressives, when Sanders himself recently refused to commit to helping any other Democrats in their fundraising efforts.

Can Humpty Dumpty Get Put Together Again?

For all the nastiness, evidence suggests anger - no matter how personal - can be put aside. The 2008 primary between Clinton and Barack Obama got heated, and gave rise to the so-called P.U.M.A. (Party Unity My Ass) movement, which swore to never support Barack Obama, if he was the nominee.

Perhaps sensing an ugliness that might not be able to be undone, by mid-April of 2008, Hillary Clinton took to praising Obama in her speeches. Laying the ground work for coming together, she started to note that she and Obama -- and their supporters -- were ultimately were on the "same journey" to bring about an America that embraces everyone.

If Senator Sanders is serious about ensuring progressives are well-positioned to beat Donald Trump, and put the Senate back into Democratic control, ironically, the best model on how to start that process might be someone else who lagged in the pledged delegate count in the spring, but wasn't yet knocked out - Hillary Clinton in 2008.