When it came to light earlier this week that our military has a base named "Aryan" in Afghanistan, the DoD was quick to come up with excuses to explain it away. They claimed that it was the Afghan National Army, and not our military, who named the base; that it was spelled Arian, not Aryan; and that Arian is just a variation of Ariana, the ancient name of the region that includes Afghanistan.

Wait a minute! The same military that just last week was excusing the use of the Nazi SS flag by our Marines by saying they were too historically ignorant to know it was a Nazi flag are now saying that our military members are such a bunch of history whizzes that it would be general knowledge among them that Ariana was the ancient Greek name for Afghanistan?

Well, despite the DoD's insistence that the base is named "Arian" with an "i," it's not. It is absolutely named "Aryan" with a "y," a name that had already raised concerns among some, but those concerns were just joked about and ultimately ignored.

The DoD's attempt to explain this offensive name away as a just spelling error might have worked if the only instance of it being spelled "Aryan" was just the one Army unit that referred to the base as "Combat Outpost Aryan" back in June, the only example anyone writing about this earlier this week, had. See Tuesday's HuffPost article, "Afghanistan Base 'Aryan' Raises Objections From Soldiers Over Name."

All other news outlets reporting on this story also had only the one example cited in the HuffPost article, but the Military Religious Freedom Foundation (MRFF), which first exposed COP Aryan after being contacted about it by members of both the U.S. military and the Afghan National Army who want the base's name changed, has since located a number of other examples of Army units calling the base Aryan, and also obtained official DoD documents that list the base's name as "Aryan."

The example used by HuffPost and others when this story was first reported on Tuesday has since been scrubbed from the Army's 170th Infantry Brigade website, but here is a screenshot of the photo and caption that were on that page. 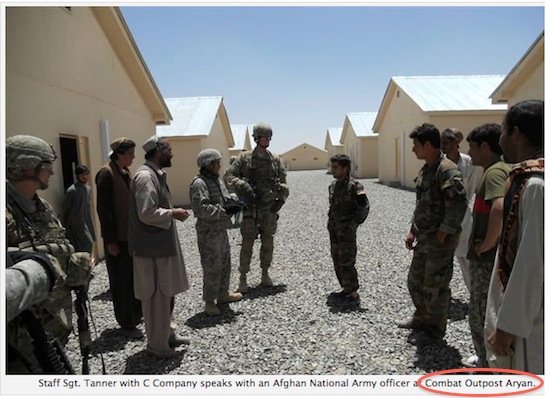 But, as I said, this was not the only example. Here are some others.

From a January 2012 newsletter of the Army's 18th Engineer Brigade, saying that an NCO from a unit currently deployed to FOB Sharana in Eastern Afghanistan was being sent to Combat Outpost Aryan: 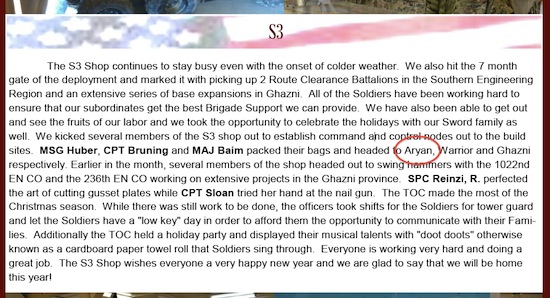 From a December 18, 2011 photo album on the 82nd Combat Aviation Brigade's Facebook page: 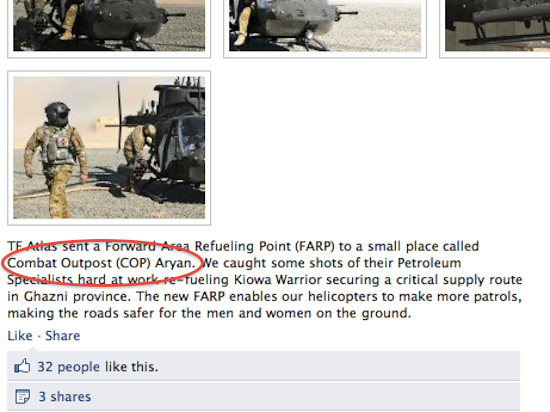 And, finally, this is from a DoD contract document obtained by MRFF. This document, a modification to a freight container contract, shows containers going to FOB Aryan:

MRFF has also obtained emails showing that an employee of the United States Transportation Command (USTRANSCOM) alerted their chain of command months ago to this base being named Aryan, asking if a different name could be designated for the base and requesting to be provided with an explanation for the choice of the name. This request was ignored. So, unlike the claims that the military didn't know that our Marine sniper scouts were using a Nazi SS flag, officials at USTRANSCOM were absolutely aware that a base in Afghanistan had been named Aryan, and we have proof of this.

Among the twenty-one U.S. service members who contacted the Military Religious Freedom Foundation about the name of this base, two have been there and verified that the base is, in fact, named Aryan. MRFF has also been contacted by ten members of the Afghan National Army who want the name changed. Now why, if the DoD's claim that the name Arian (however it's spelled) is just the ancient name of Afghanistan, would members of the Afghan National Army have a problem with it? Well, maybe because of incidents like the following.

Some of our American troops at this base started joking that Afghanistan was now an "Aryan nation" because it has a base named Aryan. The Afghan soldiers realized that our troops were taunting them, which started a shoving match that almost erupted into a fist fight, but was broken up after the first punch, which missed, was thrown.

As for the DoD's claim that this is an Afghan base and was named by the Afghans, that's just impossible to believe. Whether it's called a Forward Operating Base (FOB) or a Combat Outpost (COP), Americans are still running the show at these bases. The base named Aryan being referred to in some places as an FOB and some places as a COP doesn't mean anything. A COP is just a smaller, more remote base than an FOB. Even our troops who are over in Afghanistan sometimes seem to be unsure if a particular base is considered an FOB or a COP. On one discussion board where the difference between an FOB and a COP was being discussed, the best way one service member could come up with to tell the difference was that if you had to cook your own food you were at a COP and if someone else was cooking your food you were at an FOB.

With the exception of some FOBs and COPs being named for their locations, and a handful named by other non-Afghan forces in charge of a base, (i.e. FOB Edinburgh was named by the British), the names of these bases were clearly chosen by Americans. Some are named for service members killed near the location of the base, and others are named with what are clearly American words. Unless you're going to believe that the Afghans are naming bases with names like "Michigan," "Eagle," and "Lonestar," the DoD's excuse that the Afghans named COP Aryan is just ridiculous.

The name of this base needs to be changed immediately, and the military needs to initiate an investigation to find out who decided to name the base Aryan and who approved this name.