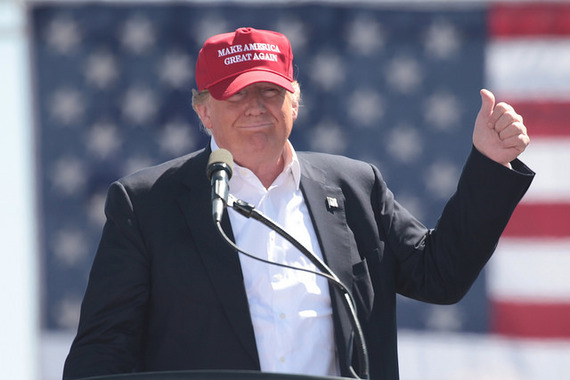 Being 'shocked, shocked!' that members of his Republican party have nominated a virulent racist to be President of the United States, George Will clutched his pearls, sniffed indignantly, and left the Republican party in a well-publicized huff. Clearly, he can't imagine how this happened. He says that a party that could nominate Trump is not his party.

He's very wrong about that. Not only is it his party, it's a party he helped build, dogwhistle by dogwhistle, denial by denial. After all, In a 2012 column that reads like a parody of pundit wrongness, George Will insisted that blackness was the only reason Americans had not recognized Obama's failure as President.

That Obama is African American may be important, but in a way quite unlike that darkly suggested by, for example, MSNBC's excitable boys and girls who, with their (at most) one-track minds and exquisitely sensitive olfactory receptors, sniff racism in any criticism of their pin-up. Instead, the nation, which is generally reluctant to declare a president a failure -- thereby admitting that it made a mistake in choosing him -- seems especially reluctant to give up on the first African American president.

Blackness, Will implied, was raining unearned benefits down on this black man. He didn't specifically say, "just like it does in every other aspect of American society." He didn't have to.

There's a difference in erudition between Will and the Trumpettes, but little else. Will likes his racism with a wink and a literary flourish. Trumpettes like theirs with a little bit of blood.

In 2013, Will described Strom Thurmond's 1948 presidential campaign as, "asserting regional grievances relating to race." In fact, Thurmond ran on a viciously racist, segregationist platform that stated, "We stand for the segregation of the races... We oppose the elimination of segregation, the repeal of miscegenation statutes, the control of private employment by Federal bureaucrats called for by the misnamed civil rights program."

When a campaign based on full-throated race hatred and white supremacy is whitewashed to "asserting regional grievances relating to race," is it a wonder that most Republicans see no problem saying that an American judge of Mexican descent is unable to do his job because he's... "Mexican." That's not racism. No! That's just telling it like it is. That's jettisoning "political correctness," against which Will himself so often rails. In the name of flouting "political correctness" he pooh-poohs objections to the racial slur, "Redskins" as a name for a major sporting franchise. He also scoffs at the removal of tributes to America's mass-murdering President, Andrew Jackson, who masterminded the ethnic cleansing of Native Americans:

Thousands died on the death marches. Thousands more died in the concentration camps that were their destination. Still more thousands were killed because they refused to leave. Soldiers were given direct orders to gun down children in cold blood. Natives who fled into the wilderness were hunted by civilians for sport.

After lauding the normalization of slurs and winking at genocide against the non-white, why should he be shocked that those with whom he shares political affiliation want to ban an entire religious group from entering the country? Per Will, it's clearly okay to denigrate according to race. It's okay to wink at race hatred. It's okay to dismiss genocide perpetrated against those who don't look like you. Why not ban Muslims? Why not deny the Americanism of the brown?

It's a small step from dismissing horrors to committing them.

Today's Republican party is entirely the creation of men like Will. He'd just prefer they spewed their venom in ties instead of baseball caps.