Sloth! No, not the fourth of the seven deadly sins, however enticing that might be, but the eponymous furry critter that has been endowed with this name for its record-breaking ability to move more slowly than any other mammal on Earth - about 13 feet a minute in the trees, half that on the ground. 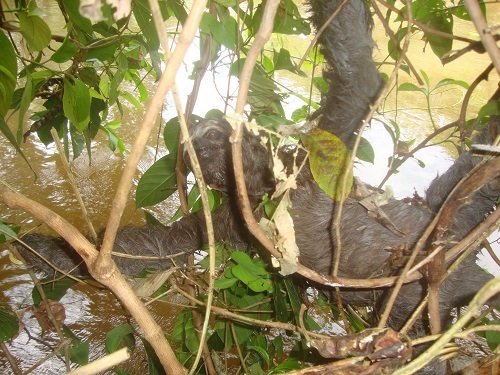 Now endemic only to Central and South America, sloths once roamed much further afield throughout the Americas, and some extinct species reached the size of an elephant. 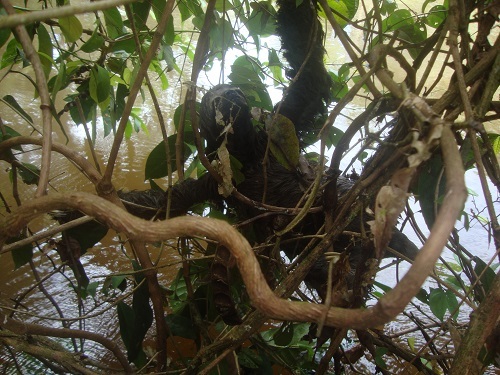 Now they're about two feet long, weigh about nine pounds and come in two-toed and three-toed varieties with claws that can top four inches. They descend from the tree only about once a week to pee and crap. They court and make love in the trees, the female giving a little screech to let any nearby male know she's ready (don't we all!), and hang upside down and every which way, eating leaves. 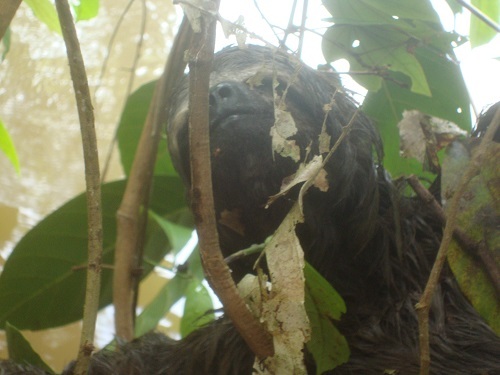 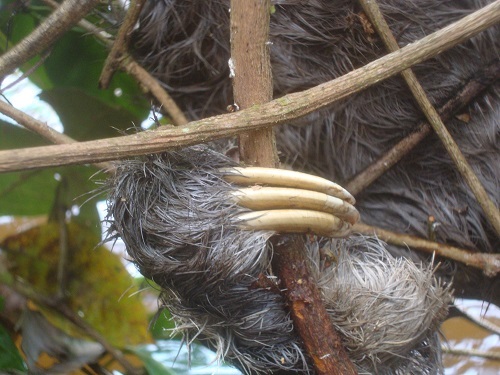 They have extra neck vertebrae allowing them to turn their heads 270 decrees, their fur hosts algae, giving them a greenish sheen, and their short snouts, flat heads and soulful eyes endow them with a quizzical look. Their nearest extant relatives are the anteater and the armadillo. 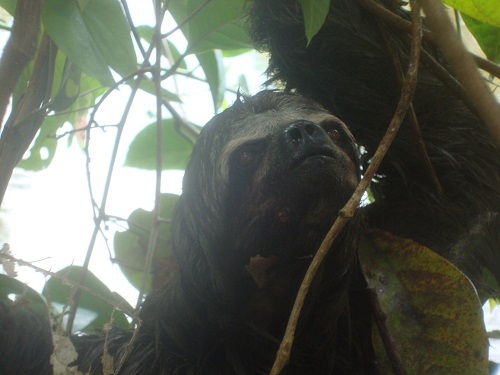 One ancient species, the Mylodon, lived in Argentine and Chilean Patagonia over 10,000 years ago until humankind did a mammoth on it, exterminating it too, possibly aided by changes in the weather. It reached a height of 10 feet and weighed about 2.5 metric tons. 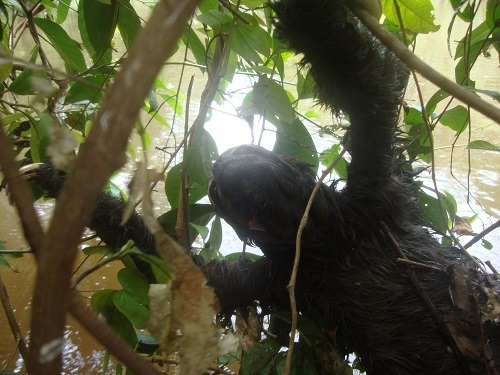 The skin and bones of one such specimen were discovered inside a cave in southern Chile, 15 miles from Puerto Natales, in 1895, a lucky find for palaeontologists.

An unlucky find for me, though, because it led Bruce Chatwin on his 'In Patagonia' wild fleece chase, a book I find singularly arid and boring though everybody else I know adores it. Oh well, once a Philistine... 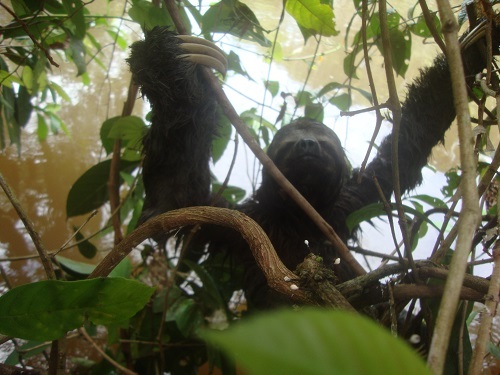 The Cueva del Milodon (Mylodon's cave) has now become a national monument and a life-size replica of aforesaid Miley graces its entrance.

This I do not visit, still annoyed with everybody adoring Bruce Chatwin - actually I'm a bit short of time because I have to get on to Torres del Paine National Park for a few days' hiking. Anyway, there's another replica right outside Puerto Natales itself, so there! 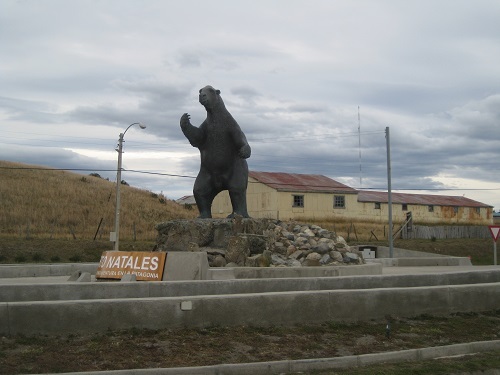 But I do come face to face, face to belly, face to arse and face to everything else with a real live three-toed sloth of the modern day in darkest Ecuador, right in the heart of its Amazon region. 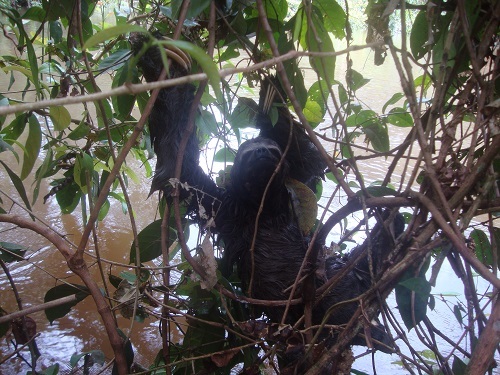 I've already been a couple of days way down the Napo River, a tributary of the Amazon, rather pissed off because I haven't see a pink river dolphin, about which there is much prurient Amazonian folklore on his changing into a present-day beau and seducing young maidens. 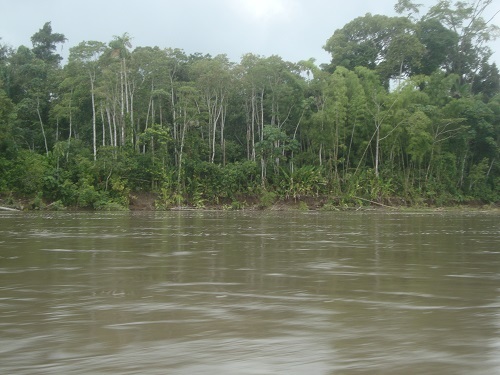 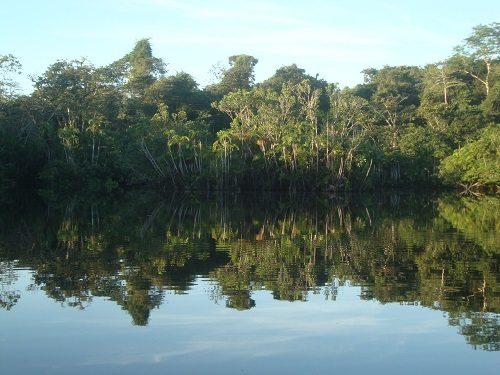 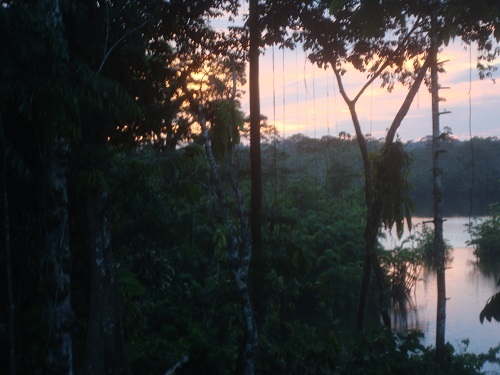 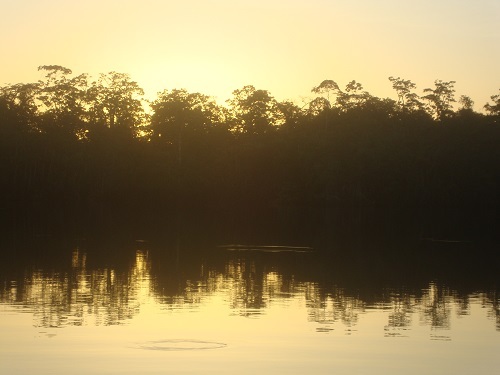 I have, though, seen - and heard - plenty of howler monkeys, parrots, parakeets, frogs that look like leaves, long insects that look like sticks, a high-legged spider known as the whip or scorpion spider that looks but is not aggressive, a green fat-bellied lizard disguised against a leaf, even flocks of green parrots pecking at a cliff face to get their daily dose of essential salt. 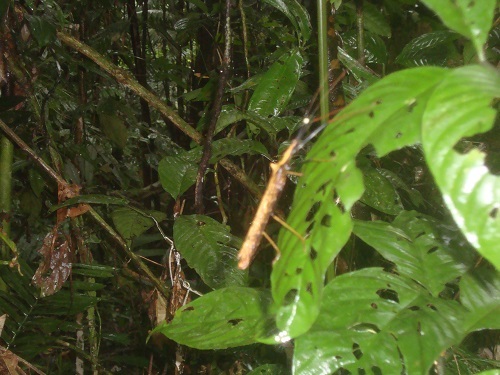 I've seen bright yellow birds, dark blue ones, all shades of green plants, islands of giant ferns, brilliant mossy trunks, and black, black clouds; and I'm in total incongruity in a yellow poncho under a black and orange umbrella on a sickly green boat as the rain comes pelting down. But still no pink river dolphin. 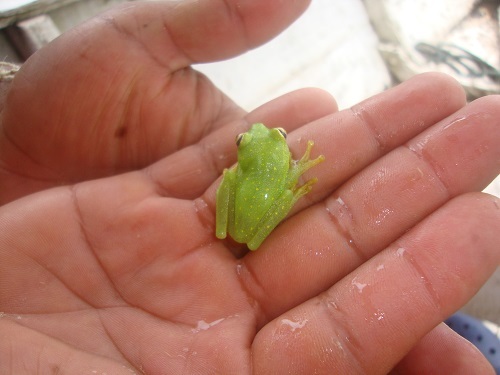 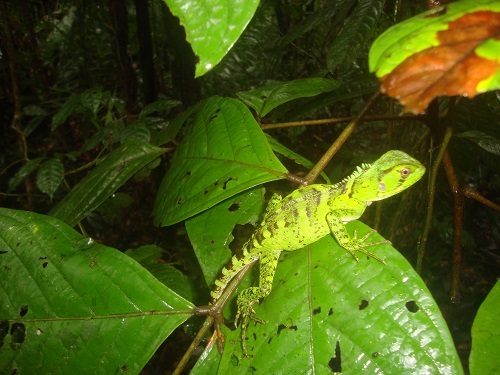 A large incredibly electric-blue morpho butterfly wings its stately way like something from the world of the Na'vi on Avatar, its shimmering wings sending shafts of azure over the brown water. A big-billed toucan flies over the trees, its yellow tail feathers flashing bright, and a squirrel monkey jumps across the river. And still no pink dolphin. 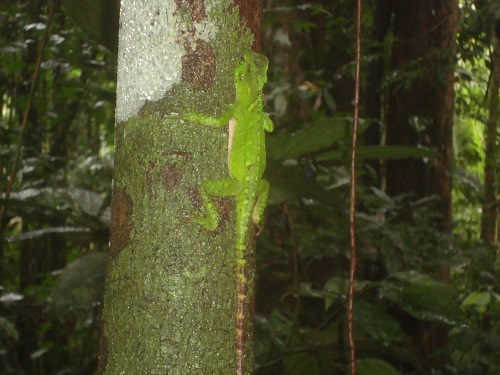 I'm also pissed off, because they might sing 'In the jungle, the mighty jungle, the lion sleeps tonight' - but not I. I get into this huge fight, you see, with my mosquito net, and have to houdini myself out of it every few minutes. 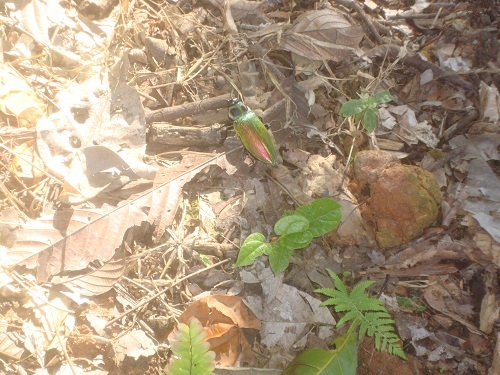 Then the thunder reverberating above the shack is not exactly the best of lullabies. And the rain is still pissing down like pounding stones on the straw roof until it's time for breakfast. 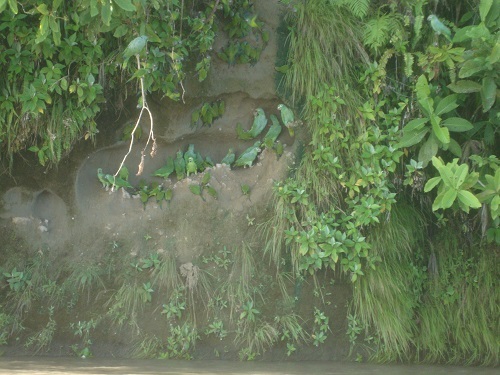 By the time Fausto, my guide, and the boatman take the little put-putter out on the Panaiaco, a jungle-invaded tributary of the Napo, on our third day, the last thing I'm thinking is 'sloths.' 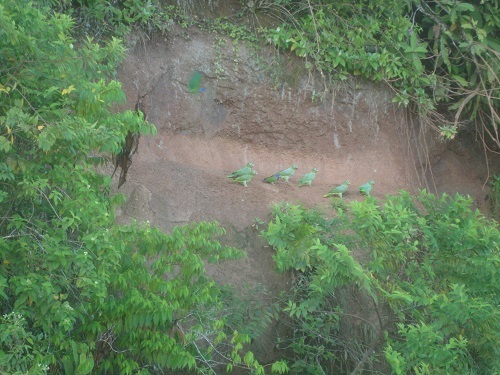 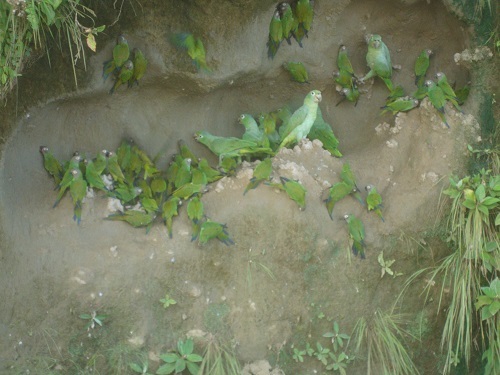 And that's when Fausto claps me on the back, and bellows 'sloths' in my ear. He's sighted a three-toed specimen swimming across the river. 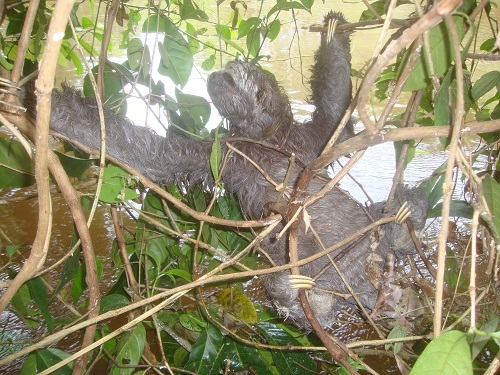 He tells the boatman to back slowly and go left. Of course, the boatman speeds forward and goes right, crashing us into the opposite bank - and that's after he went smack into a tree trunk yesterday on a totally open stretch. But it's stopped raining and it's actually brightening up. 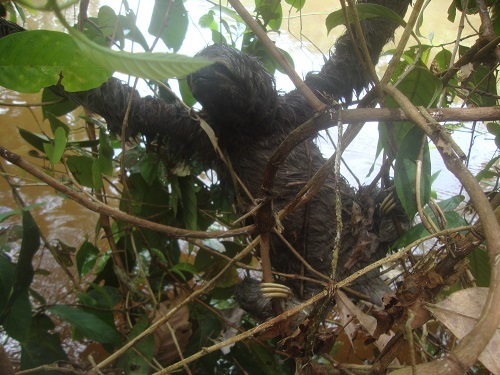 Finally, after much coaxing from Fausto, he gets enough of the hang of it to bring us close to the left bank where the sloth has now emerged from the water and is slowly, oh so slowly clambering upside-down up the branches. 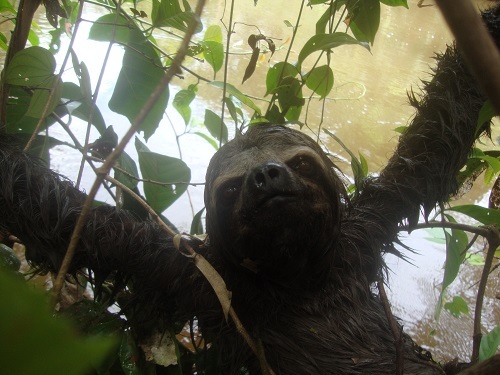 What a strange, and strangely cuddly, creature! He's about as big as a medium-sized monkey. His soulful eyes look at us lazily, the remarkably long three white claws on each of his four limbs clasped tightly round the branches. 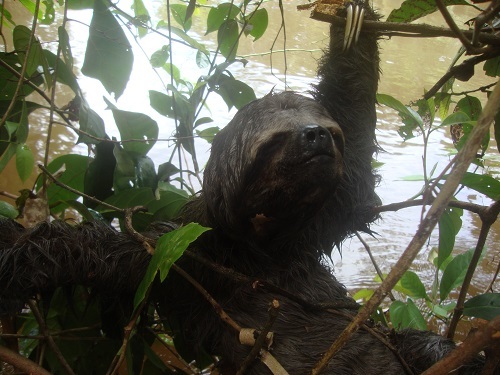 He doesn't seem to mind at all as Fausto pulls back the branches and leaves to get a better view; he just looks on, very slothfully of course, mildly hissing if we get too threateningly close. 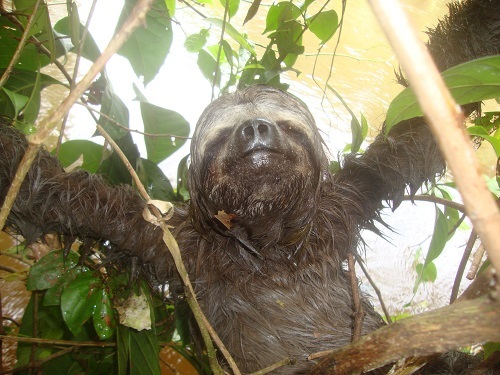 And there you have my slothful encounter of the third kind! But still no pink river dolphin. 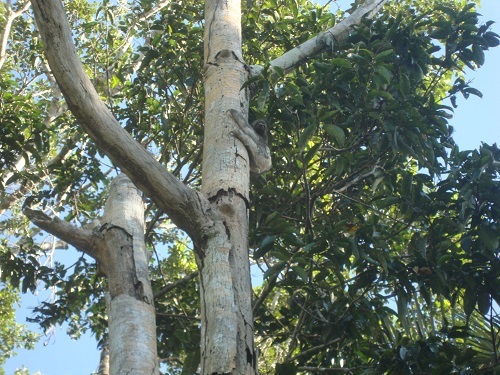 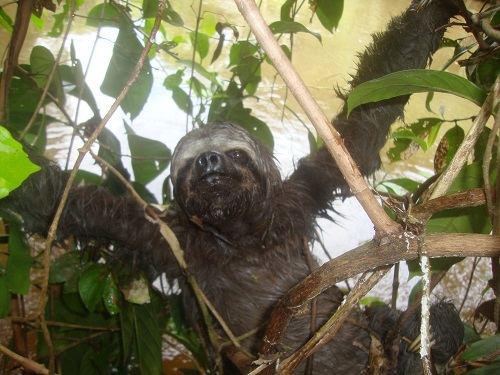 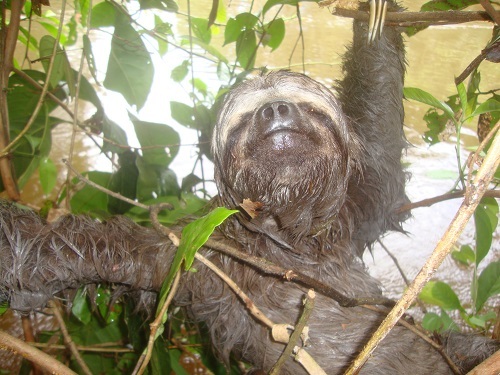 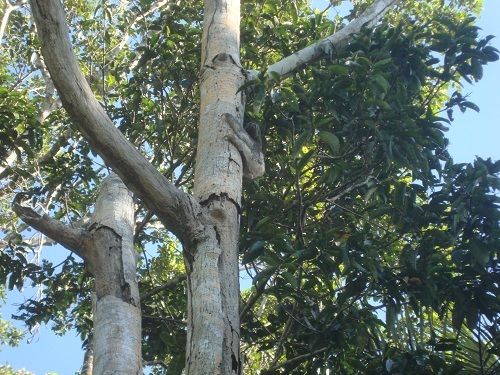