I attended two early screenings this summer of Davis Guggenheim's big-ticket education documentary, Waiting for Superman, and it touches the education reform zeitgeist. When the film unspools across America over the next weeks, I predict a massive chorus of voices echoing his entreaties for more great teachers, less union influence, and school choice.

The movie masterfully pushes the audience's emotional buttons by following five vulnerable children and their vulnerable parents who are hoping and praying for admission by lottery to privately-run, publicly-funded charter schools. The families' limited options are undeniably unjust. The post-screening Q&A sessions I attended featured Michelle Rhee, Randi Weingarten, and Geoffrey Canada, and all of them opened their comments by saying they cried through the film's final scenes.

In the closing credits, the movie plays hopeful music, and floating text assembles itself on the screen to read: "Great schools come from... you" and repeatedly encourages viewers to sign up for a text message feed.

The overarching message to movie-watchers is: CARE!!! CARE ABOUT SCHOOLS!!!

It's unassailable. So let's take a step past that. Let's assume, as a baseline, that we all care. How does a school system -- not just a few schools, but our entire national public school system -- improve? Caring isn't enough. In fact, a riled-up crowd that's hazy on details will be willing to follow just about anyone who presses home their talking points and waves the rhetorical banner of "reform."

I'm really scared that caring, well-meaning people who want justice for underserved students will follow this reform drumbeat into an irreversible abyss of privatization and high-stakes testing.

Guggenhein's front-page Huffington Post essay titled "Repeat After Me: We Can't Have Great Schools Without Great Teachers" emulates his film in its structure. Guggenheim presents his teacher bona fides by mentioning his first documentary, The First Year, which followed rookie teachers. He opens and closes with a personal, emotionally-charged narrative that informs his above-reproach talking point (Teachers are very, very important). The essay, though, is light on the actual steps we need to take to recruit, develop, and retain a new generation of great teachers.

The closest Guggenheim comes to getting specific is here:

And when you start with that simple truth, the solutions become pretty clear. Let's recruit our best and brightest. Develop the ones we have to become better teachers. Reward the ones who are doing a great job. Recruit and train talented principals. And after trying everything, help find another job for those teachers who aren't cutting it.

This is the most important part of his essay -- the part that might actually influence what happens in American classrooms -- and it's simplistic to the point of uselessness. I know that Guggenheim is a movie director and not necessarily a policy wonk, but by making Waiting For Superman he should assume responsibility for the reforms he's pressing. His recommendations are so vague that many would-be reformers can and are using the same language to promote untested, potentially dangerous initiatives.

Let's take these one at a time:

#1: Let's recruit our best and brightest.
Yes, it would be great if a huge number of our top college graduates became career teachers. Right now, they don't. The profession of teaching doesn't pay well enough and doesn't get enough respect to attract the numbers necessary to draw the power class into social studies class. This school year, reformer darling program Teach For America has 8,200 corps members, which accounts for about 0.2% of the national teacher workforce. The enormous amount of money needed to boost teacher education programs, teacher salaries, and student loan forgiveness is nowhere on the political radar for Democrats or Republicans. It should be, but when our leading advocacy voices simply say "recruit our best and brightest," it commonly leads to token praise for "innovators" like TFA (and often its offspring, the KIPP charter school network) and skirts the crux of the issue.

#2: Reward the ones who are doing a great job.
What is a great job in teaching? You get different answers when you ask students, parents, principals, and the data analysts who make policy. The current tide in education reform is dictated by data worshippers; they say a great job (or poor job) can be reflected in year-to-year high-stakes testing data. This a flawed ideology; there are too many inputs that contribute to a child's one-time bubble test score. This system punishes teachers who work with tougher students and distorts curricula for an out-of-control testing regime -- a wolf in accountability's clothing. Guggenheim's vague statement is red meat for merit-pay advocates who don't understand classroom dynamics and want a market-driven silver bullet-- cash for test scores. (They called it rewarding "achievement.") This is bad for kids.

#3: Recruit and train talented principals.
Amen! But where do the principals come from? Is he talking about importing managers from the private sector? Implementing more career ladders for educators to grow into leadership positions? What does a talented principal look like-- a beloved community leader or a savvy technocrat?

#4: After trying everything, help find another job for those teachers who aren't cutting it.
Since when does anyone care about finding another job for departing teachers? Geoffrey Canada said at the screening, "I don't care if you counsel them out, ice cream them out, whatever. Just get them out." The unions need to give a little here on expediting due process for firing bad teachers. But due process is a crucial protection for teachers against hostile or unfair administrators who populate many schools. And what does "trying everything" mean? What kind of supports does Guggenheim propose for struggling teachers? It's too easy to read this as code for: "Eviscerate the unions. They're in the way of cleaning house." (Imagine Michelle Rhee with her broom and scowl on the cover of Time Magazine.)

I don't doubt Guggenheim's earnestness on these issues. But as a teacher in an urban school, I am terrified that the "reformers" who share his talking points are creating school environments so unwelcoming to teachers' individual talents that Guggenheim's dream of great teachers everywhere will never come close to realization.

Would-be great teachers -- the best and brightest -- can be great because they are driven to become experts in their craft, their content, and they are skilled in how to work with other human beings. But they won't enter the profession, and they certainly won't make a career in the classroom unless they are supported and valued in tangible ways. Reformers must think about what that looks like on the ground. 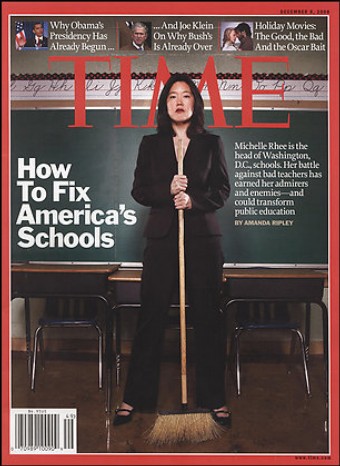 Dan Brown is the author of The Great Expectations School: A Rookie Year in the New Blackboard Jungle. He teaches high school English in Washington, D.C.