I guess I shouldn't be surprised that the reaction to Barack Obama's lifted speech, a loaner from friend and supporter Massachusetts governor Deval Patrick, has been mild. To my mind, it's not because it's not shocking that the candidate soaring to victory on the wave of his inspiring oratory and stirring message was found to have borrowed some of that stirring message wholesale from a speech delivered almost a year and a half ago — call me crazy, but that I found sorta shocking. No, to me it seems to fit with the general modus operandi of the media: If it's Hillary Clinton, the intent was probably nefarious, if it's Obama, it's no big deal, and why is Clinton's team blowing it so opportunistically out of proportion?

I shouldn't be surprised, but I am — because this one just seems so straightforward. Hillary needles, saying that "talk is cheap" and that words were nothing without action. Obama responds, like so:

Inspiring, soaring, heartfelt — but not exactly original. I'm not talking about the references — those are obvious. We're meant to get them. I'm talking about their configuration, combined together to form a specific argument in response to the claim that talk is cheap.

Here is the problem: They weren't his words. Flashback to October 15, 2006, and Deval Patrick on the campaign trail to the Massachusetts governorship.

The Obama campaign has said that this is no big deal. With respect, I disagree. I think this is a big deal, particularly for Obama, whose stock in trade is soaring oratory and his inspirational message of hope. I know I keep using those words — and I'm not alone — but it's important here, because it goes, in effect, to Obama's core competency. Put bluntly, Obama was attacked for offering "just words," and he made his case for the value of words by using someone else's recycled speech from over a year ago. This is his argument for why talk isn't cheap?

There are two problems here. Let's first deal with the charge of so-called "plagiarism." This isn't plagiarism per se, since it was an authorized use and was not "stolen," which seems to be a necessary component of the act. But the other necessary component applies: The passing off of another's work as your own, the absence of attribution, the "presenting as new and original an idea or product derived from an existing source." There can be no question that that was done here. 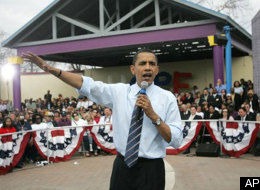 The second problem is this: The so-called defense by Obama, cool as a cucumber, that he and Patrick often put their heads together and swap ideas and use each others' bits. (Well, evidence of that is cropping up but I'm focusing on this one example, since that's what's prompted the lack of outrage.) Obama and his supporters have said essentially that these quotes like those cited are fair game, and there's noting proprietary about them. Which is true — what is proprietary is how they were used. That is what is at issue — not the fact that Obama and Patrick quoted the same great statesmen, but that they used virtually the identical formulation and configuration. That's the issue. That's what makes this lift so egregious - it was wholesale.

(And, incidentally, it was clearly distinct from both John McCain and Clinton using the phrase "fired up and ready to go" — the former was clearly done tongue in cheek, and the latter, while very possibly an effort by Clinton to horn in on a rival's slogan, doesn't quite rise to the standard of "taking another's work and passing it off as your own." One phrase is one thing; the rhythmic, structured linking of three in an identical fashion to make an identical point of an associate is quite another. It was also clearly distinct from Clinton's use of the phrase "And we asked ourselves, will we say when the call comes 'send me'?" when her husband, President Clinton had said two years earlier: "Say to him what he has always said to America? Send me." NBC News offered that up as somehow analogous, even though both Clintons were referring to a freaking quote from the Bible (Isaiah 6:8) — and even though, in the Bill Clinton clip, the freaking crowd chanted "send me" right along with him. Sorry, but the two examples are completely different, and it was disingenuous for NBC News to have presented them as comparable.) 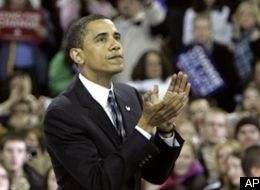 Whew! So much effort, parsing the differences, breaking down the episodes. And to what end, right? What's the big deal, really? It's a fair question. We know Obama has speechwriters, as does Clinton; we know they both have teams that work together (er, sorta) to put forth the message. I don't think Obama sat in the editing suite agonizing over the final cut of his Superbowl commercial.* Obviously. The issue is, he is presenting himself as a singular candidate at a singular time presenting a singular response, and oratory is his singular feature. The upshot of all that is that his moving, inspiring speeches hit the mark because they speak to the need now, the desire for change now, the hope for the future starting now. When the veracity and honesty and efficacy of that is called into question, you expect that Obama's response would therefore come from the now — or more precisely, "the fierce urgency of now" as he said in tonight's victory speech, quoting Martin Luther King. In what world does it make sense to meet the fierce urgency of now with a recycled speech from over a year ago? No matter how good the words are, they're from someone else's now — not only the now of another candidate, but the now of other voters.

The language of hope matters — its authenticity and its transparency. No matter how inspiring and sincere and genuine Obama may be, his words have to reflect that, end to end. He can't just go over and pull the lever on the Hope-o-Tron for the perfect pre-packaged soundbite — not if he wants his message to be credible. If he truly cares about the power of words, then they can't be ones he swapped in there out of convenience, because they sounded good. There's got to be a higher standard — because words matter. And that's a direct quote.

*In the interests of scrupulous full disclosure, I said something similar yesterday on MSNBC. Whoa, I totally just plagiarized myself! Actually, in all seriousness, that was one of three such I did MSNBC over the past two days — and one of many across cable and network news, never mind every other type of media — so Beth Fouhy of the AP, saying that the story didn't have a life of its own other than being pushed by the Clinton campaign is pretty disingenuous. And also wrong.