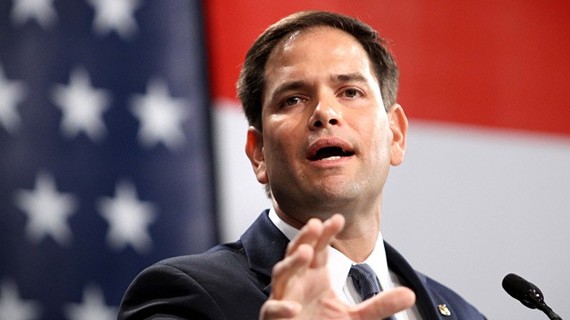 Some Republican pundits are praising your presidential announcement speech using words like inspirational, compelling and transformational. Republican talk show host Joe Scarborough said "everyone was saying this is the greatest speech of all time." I assume Scarborough meant the greatest speech of all time that you have given, but I digress. I hope you are basking in the praise you are receiving from Republican stalwarts, but "yesterday is over."

Senator Rubio, your record in the Florida legislature will now be scrutinized. I am sure you know what happened to your Congressional colleague Aaron Schock, who used federal funds to decorate his Downton Abbey office and take lavish trips. I understand that you had some financial difficulties while you were in the Florida legislature that will now be examined from the national stage by a trove of investigative reporters.

I am sure the American voter will want to hear your explanation of why you charged things like wine, grocery bills and minivan repairs to the Florida taxpayer. Government credit cards are not supposed to be used for personal expenses. Then there are those questions about the spending of the Floridian for Conservative Leadership which you led, like not disclosing a $7,000 payment to yourself. Add that lavish $48 million district courthouse that was built on your watch and it doesn't sound like a fiscally conservative record to me. I am sure you hope that yesterday is over.

I want to compliment you for clearing up the narrative about your parents fleeing Cuba. Senator Rubio, you used to say your parents came to America fleeing Castro's Cuba and that you are the "son of exiles." Your new narrative honors your parents without embellishing the facts. This change in your announcement speech is truly transformational. It transformed a prevarication into the truth.

You say we cannot go back to the leaders of the past. Your party would elect George W. Bush, Ronald Reagan, or Jeb Bush, instead of you today. Yes, yesterday is over. Unfortunately for you, tomorrow doesn't look so good. Unless you want to be a vice presidential candidate. You should ask Congressman Paul Ryan how much fun that is.