Yesterday (Thursday, June 18) the Lunar Reconnaissance Orbiter (LRO) blasted off from Cape Canaveral Air Force Station in Florida, and will reach the Moon next Tuesday, June 23. LRO is a robotic mission that will pave the way for humans to return to the lunar surface. It's also a timely teachable moment in the news for another reason--

July 20th is coming. I'm waiting for the emotions to wash over me again. It will be the 40th anniversary of the first human footprints on another world, and I lived it. 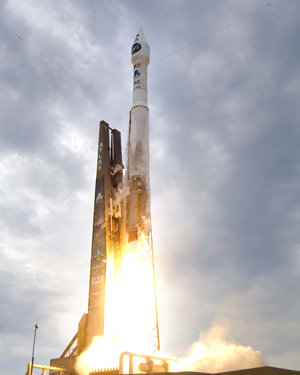 I remember it so vividly. It was July 16, 1969. At Kennedy Space Center in Florida, Apollo 11 -- a rocket as tall as a 36-story building -- blasted off with Neil Armstrong, Buzz Aldrin, and Michael Collins aboard. The command module Columbia -- with barely enough room for the three crew seats -- was their home for the 3-day trip to the Moon, and by July 19th they were in orbit.

On July 20th, Armstrong and Aldrin crawled into Eagle and descended to the lunar surface. Back on Earth, glued to TVs and radios, hundreds of millions of us ... waited. We weren't sure how we'd know. We weren't sure what we'd hear. And then it came ..."The Eagle has Landed" -- and we were in awe.

I was 11 at the time, watching it unfold on our black and white TV in Uniondale, Long Island. I remember racing outside, looking up at the Moon 240,000 miles away and thinking to myself--there are three people up there!! And they were surely looking back at me, with a beautiful blue Earth appearing 4 times the size in their sky as the Moon was in mine. Can you imagine that sight? 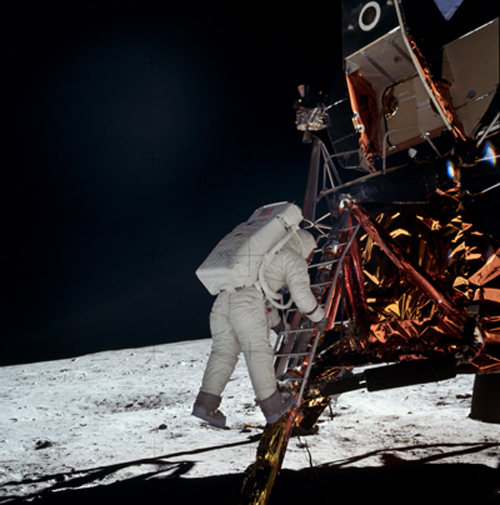 I worked at the Smithsonian's National Air and Space Museum for 8 years in the Laboratory for Astrophysics. I'd walk by Columbia each morning en route to my office. Never when I was 11 did I expect to be so close to it. When I first followed its flight in 1969, Columbia's journey took it 240,000 miles away from me. And there it was, this most remarkable piece of history, less than an inch below
my fingertips resting against the protective plexiglass covering.

At 5:00 pm, I'd often come down from my office in the non-public spaces, to be on the gallery floor, with all those that came from far and wide to this most visited museum on the planet. There were typically many school groups that had traveled to DC from across the nation that were still in the building. Their favorite gathering spot before loading the buses was the Milestones of Flight gallery, home of Columbia, as well as Lindbergh's Spirit of St. Louis, and at the time, Orville and Wilber's Flyer. It was a sacred place for human dreams of flight in air and space.

Almost every time I came down at the end of the day, I'd walk over to Columbia. It's as if it were asking me to visit -- to re-connect with my past, and to that moment when I was 11 that I knew I wanted to be a space explorer. And almost always without fail, sitting there under Columbia's comfortable overhang, a group of students casually waiting for the rest of their class. "Do you know what you are sitting under?", I would ask. They'd all twist their heads up, many of them close to 11 years old, and they didn't have a clue. How did I feel? It was a depth of hurt that only drove in me a deeper commitment to education.

So from Dr. Jeff the educator, here is my advice. For those of you that lived it--remember. And prepare to relive the anniversary next month with your children--and your children's children. For it was 40 years ago.

Let me help a little. If you visit this post at Blog on the Universe, at the bottom of the page I've listed wonderful resources you can use to celebrate this moment in human history--as a family.